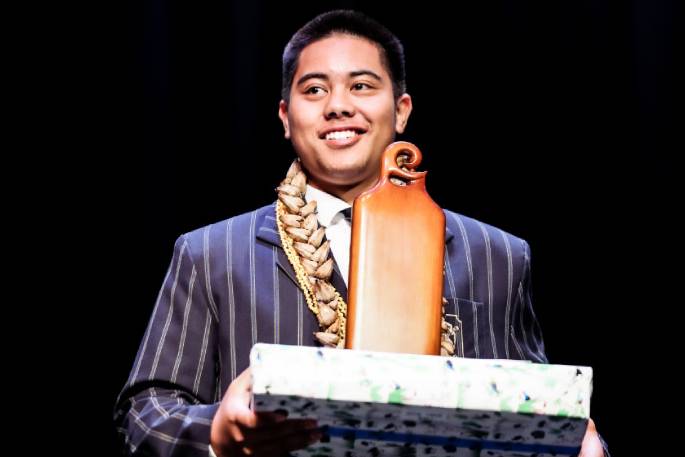 Of Samoan and Niuean descent, the 17-year-old says reversing the trend of Pacific achievement at the Bay of Plenty school, while also contributing to its growing Pacific culture, has been very rewarding.

“It’s something I am really proud of,” says Reece.

Born and raised in Henderson, West Auckland, Reece is the youngest of three children in the Talopau household.

In mid-2016, his family moved to Tauranga, and Reece attended Tauranga Intermediate, before heading to Tauranga Boys’ College.

The tenacious student’s hard work paid off when he was named Dux of the college for 2021, becoming the first Pacific student to earn the honour.

“Tauranga Boys’ College has around 2000 students and only around five per cent identify as Pasifika,” says Reece.

“So, becoming Dux at Tauranga Boys’ College is a huge achievement not only for me, but also for my family, friends and my Pacific community.”

Although his family and community were not able to attend his prizegiving due to Covid-19 restrictions, Reece says he was humbled by the support he received from his Pacific brothers and peers at school, and by knowing he has made them proud as Pacific peoples.

Earning his achievement has not exactly been stress-free in this unprecedented pandemic, with disruptions and online learning, he says.

“The online learning of the university papers I took was tricky to navigate… plus I was also working part-time as a Maths tutor at NumberWorks’nWords so I had to learn to balance my work and studies.”

Tauranga Boys’ College has a close and long-standing relationship with the University of Waikato and Victoria University of Wellington, and it delivers several university papers to its Year 13 boys.

Reece achieved an A+ in all four papers he took - Calculus, Physics, Chemistry and Statistics, and the support from his parents, teachers and lecturers during his studies has been invaluable, he says.

Always aiming high, Reece is set to attend the University of Auckland next year to study Mechanical Engineering.

“I have always excelled in science subjects such as Maths, Chemistry and Physics and my ultimate aim is to pursue a career in the aerospace and space engineering sector,” he explains.

He hopes his achievements will inspire Pacific youth to also aim high and not allow stereotypes associated with being Pacific define who they are.

“If I can do it, they can do it too - pursuing a career in the STEM field, I hope to encourage more interest from our younger generation towards these high earning jobs, and change the narrative so often associated with being Pacific and academic achievement and employment.”