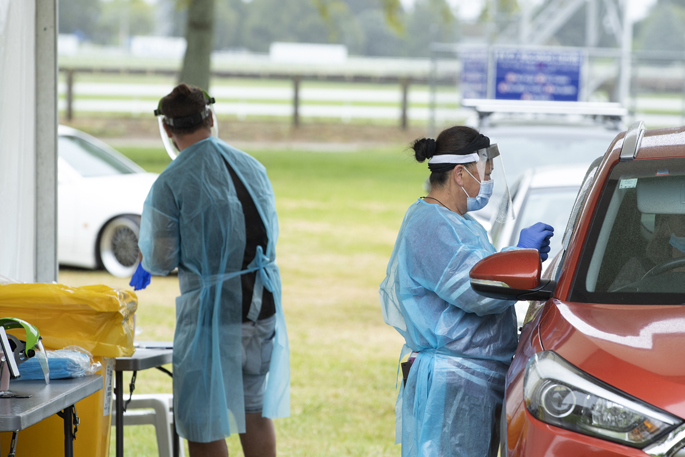 People are being advised to get tested if they have any cold or flu symptoms. Photo: John Borren/SunLive.

The Ministry of Health is reporting no new Covid-19 cases in the Bay of Plenty today.

In its daily statement, the Ministry reports there are 182 new cases in New Zealand.

The community cases are in Northland, Auckland, and Waikato.

"We are also advising of a new case in the Nelson-Marlborough region. As this case came in after our usual cut off period, it will be officially included in our figures tomorrow.

"Meanwhile, there are no additional cases to report today in the Bay of Plenty, Lakes, Hawke’s Bay, Taranaki, MidCentral, Wairarapa, or Wellington."

See the bottom of this story for a full breakdown of today's numbers.

The Ministry is asking anyone in New Zealand with symptoms – no matter how mild – to please get tested, even if you’re vaccinated.

"Please remain isolated until you return a negative test result.

"If you are not vaccinated, now is the time, as vaccination is number one defence against Covid-19. Your DHB or local health provider will have plenty of opportunities to make this happen."

"Today, we are reporting five new cases in Northland.

"Two of the cases were announced yesterday and are being officially added to the case tally today.

"The remainder are made up of two cases in Kawakawa and one case in the Far North. These three cases are linked to existing cases."

Meanwhile, an unexpected detection of the virus was picked up in a wastewater sample taken in Opononi last week, reports the Ministry.

"So, we urge anyone living in or near Opononi with any symptoms that could be COVID-19 to, please, to get a test - and remain isolated until they return a negative test result."

Testing is available from Rawene Hospital this week from 9am-2pm.

Further testing and vaccination sites open across the region can be found on the Northland DHB website.

Today, there are 167 new cases to report in Auckland.

There continues to be daily reviews of testing numbers and testing locations to ensure good coverage of risk areas, says the Ministry.

"Health staff are now supporting 4207 people to isolate at home, including 1158 cases."

There are 10 new cases being reported in Waikato today; four in Huntly, two in Te Kûiti, one in Hamilton, and the location of the remaining three are still to be confirmed.

Nine of today’s cases have been linked to previous cases.

"There are five pop-up and dedicated testing sites operating across Waikato today in Hamilton, Ōtorohanga, Thames and Te Kuiti.

"There are four Covid-19 positive patients in hospital, including one in ICU.

"Health staff in Waikato are now supporting 124 cases to isolate at home."

The new case reported in Hawke’s Bay yesterday is now isolating in a community isolation facility.

Close contacts identified to date have been contacted and are now isolating at home. Two close contacts in the case’s household have returned negative tests.

Patients at Hawke’s Bay Hospital Emergency Department at the same time as this case have now been contacted and asked to self-monitor for symptoms.

The Ministry says investigations into the source of this case’s infection have linked it to an Auckland case.

"Public health officials continue to work to identify any further locations of interest this case went to while infectious.

"Those identified so far are on the Ministry’s webpage.

"They include PAK'nSAVE Napier, a Hasting pharmacy, and an ice cream shop in Napier.

"If you were at these locations at the relevant time, please follow the advice on the Locations of Interest webpage."

Testing locations in Hawke's Bay today can be found on the DHB’s website.

A new case was confirmed in the Nelson-Tasman region, following a positive test result being returned last night.

The case and their close contacts are in isolation, with testing of those contacts underway. Investigations into the possible source of infection are ongoing, says the Ministry.

"Several exposure events are being assessed and any locations of interest confirmed will be published on the Ministry’s website.

"This case will be formally added to the Ministry’s case tally tomorrow."

There are no new cases to report in Canterbury today.

"The case travelled from Auckland to Christchurch on Thursday 25 November on Air NZ Flight NZ8475 arriving in Christchurch at 10.50am.

"Anyone who is considered a potential contact of this case will be contacted directly.

"Unless you are contacted, you are asked to monitor for symptoms, and get tested straight away if you develop any consistent with Covid-19."

People living in Canterbury are also asked to monitor the Ministry’s locations of interest page, which is updated regularly.

"Every new case is an urgent reminder to get tested if you’re feeling unwell. Testing at high numbers will help to minimise and contain the spread of Covid-19 in Canterbury," says the Ministry.

Testing locations throughout Canterbury can be found on the Canterbury DHB website.

An independent review into the deaths of two people who had tested positive for Covid-19 and were self-isolating at home has been released today.

"This is a very sad time for the whānau and friends of the deceased and our hearts and thoughts are with them as they come to terms with their loss," says the MOH.

"The two separate cases were living alone at the time of their passing in early November. The panel considered both deaths were potentially preventable and there were missed opportunities that contributed to the outcome.

"The Northern Region Health Coordination Centre – which coordinates the Covid-19 response for the three Auckland DHBs – accepts the findings of the review that has been necessarily thorough and swift.

"The findings provide insights that are supporting improvements to the Interim model for community home isolation system that is currently in place while the national policy and implementation of primary care-based support is being developed."

In line with the recommendations from the report, NRHCC have made changes in the last three weeks to scale and improve the system including: ·        Immediate clinical assessment using information already available to quickly identify those who are high risk and needing special clinical, social or mental health support ·        Door knocking for those not able to be contacted by phone, particularly those isolating alone ·        Significant IT system improvements to better support the service ·        The piloting of new models with Mâori and Pacific providers who are able to provide holistic clinical, social, welfare and mental wellbeing support ·        The establishment of a Clinical Governance Group with the purpose of identifying emerging risks and trends, so that issues can be addressed.  The Group has already met.

***One previously reported case in Auckland had a duplicate record, and therefore has been removed from the total count. A separate, previously reported case in Waikato has been deemed historical and removed from the outbreak figures. These changes, combined with the latest cases, result in a net increase today of 180 cases in the community outbreak. New case identified at the border