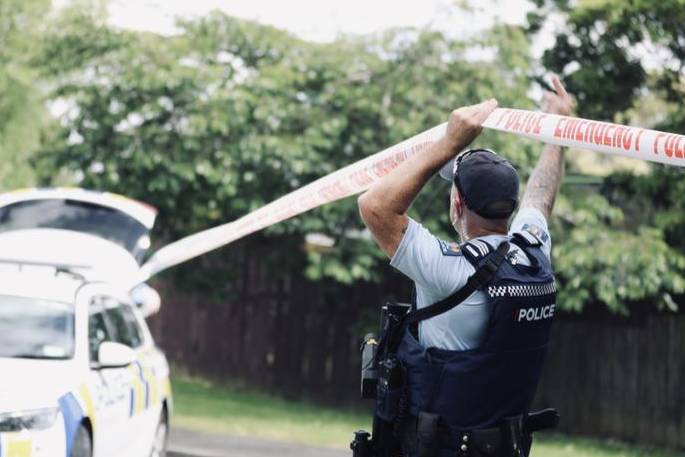 An officer at a cordon round the scene of the reported firearms incident in Glen Eden this morning. Photo: RNZ / Marika Khabazi.

A man who injured three police officers after he opened fire on staff attending a call-out today, has died after he was shot by police.

Police were called to the address in Danube Place, Glen Eden, Auckland, at around 8:17am with reports of a house on fire and shots being fired.

AOS attended and tried to negotiate with the man, however, matters escalated and he fired at Police who returned fire, says a statement released by police this morning.

First aid treatment was given but the man died at the scene.

"We are working to notify the man’s next of kin and will be providing them with support at this difficult time," says a police spokesperson.

"Two of our officers have moderate injuries and a third officer has been seriously injured.

"All three are in Auckland Hospital in a stable condition receiving treatment."

The injuries are not life threatening.

"Police will provide support to the injured officers and their families as they recover.

"Police now have a critical incident investigation underway, and the Independent Police Conduct Authority and Worksafe have been notified as is standard practice."

Police Commissioner Andrew Coster will address media at a stand-up in Auckland today at 2.30pm.

Did you really want to take a cheap shot at the PM on the back of this? In all gun-related incidents, the responsibility lies solely with the finger on the trigger.

But the Police sign up and step up knowing that this is the risk, this is their job. Quite obviously the offender cracked mentally and this was the tragic outcome. There but by the grace of God goes each of us. We’ve all been pushed at one time or another to our limit but fortunately have regained control. It doesn’t make it right, it doesn’t justify it. It’s an absolute tragedy for both the offenders family and the Polices family and brothers in arms. My heart goes out to all involved in any way great or small. To ALL the Police thank you for your service to mankind, to our communities. You are appreciated. It shows Jacinda has her head in the sand.

I guess this firearms incident must have been another “law abiding NZ gun license holder” that Jacinda had recently targeted. Nice to see one of her policies actually working?!

An outcome that nobody wanted and nobody asked for. It underlines once again the incredible service that our cops provide, putting their lives on the line to keep us safe. I have to wonder what drives someone to the sheer insanity of opening fire on the Police; condolences to the family, and wishes for speedy recovery for the Officers who were wounded.