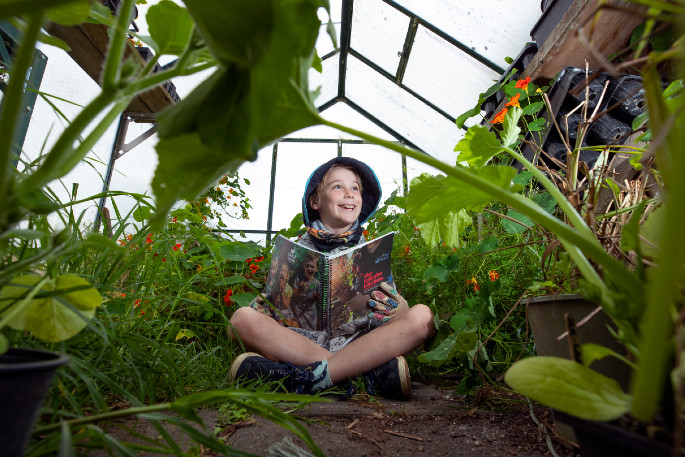 In a corner of Oropi School, large garden beds filled with silverbeet, beans and seedlings are tended by students.

In the converted container kitchen, other children are cooking up scones with fresh lemon curd.

These activities are part of the school’s Garden to Table programme, where kids learn how to grow food then turn it into tasty meals.

To celebrate four years of the programme at the school, they have created The Kōkako Kitchen cookbook - a collection of recipes tasted and created by students during their weekly Garden to Table sessions.

During The Weekend Sun’s visit, veggie dumplings and scones were on offer and we can attest to their deliciousness!

The children chatter excitedly as they make the dumplings and harvest broad beans from the Oropi School garden.

The young gardeners are engrossed in their weekly Garden to Table session, where they learn how to grow produce then prepare it.

Oropi School was one of the first schools in the region to introduce the programme four years ago, and they’ve marked their success by creating a vegetarian cookbook.

The Kōkako Kitchen is a collection of around 70 seasonal recipes that have all been tried, tested and made by students.

Each class got to vote on their favourite recipes, and the most popular made it into the book.

Garden to Table supervisor Heron Rickard says the students that first started in the programme are now heading off to college, so it felt like a good time to create the cookbook.

“It’s a reflection of our journey over the last four years,” says Heron.

The vegetable dumplings are a firm favourite amongst the students, and it is one of the recipes Israel Ottesen loves to make.

The eight-year-old says he enjoys preparing and cooking food, and has learnt where to plant things in the garden to help them grow properly.

“I like the cookbook because it stores everything we’ve done in the past,” says Israel.

“I’m always with my friends when we’re doing Garden to Table, and we just have a blast doing the cooking and making the yummy food.”

Willow Exelby has learnt how to bake, sow seeds and how to “pick stuff out of the ground without killing them”. Her favourite recipe is veggie schnitzel.

Heron says the programme is a wonderful experience for the children because they can be outside, in nature and asking questions.

“The most important thing is seeing where their food comes from,” she says.

“The real instantaneous wins we see and that parents tell us, is their kids are trying foods that they wouldn’t ordinarily try.

“That has mostly to do with the fact that there’s a personal pride in having planted the seed and grown the plant and pulled the weeds out and kept it watered and fertilised.”

Children can see very quickly that what they are planting is on the way to becoming food for them, says Heron.

Garden to Table does more than teach gardening and cooking skills, with maths, science and English all incorporated into the sessions, she says.

“The other cool thing is that teachers use it as a springboard for learning in the classroom.”

Heron, like the students, has her favourite recipes from the cookbook - the lentil bolognese and flatbread.

All money raised from cookbook sales will go back into the Garden to Table programme, with the goal of upgrading the greenhouse and adding irrigation.

To order your copy of The Kōkako Kitchen, visit: www.oropi.school.nz