Help requested to box up kindness this Christmas 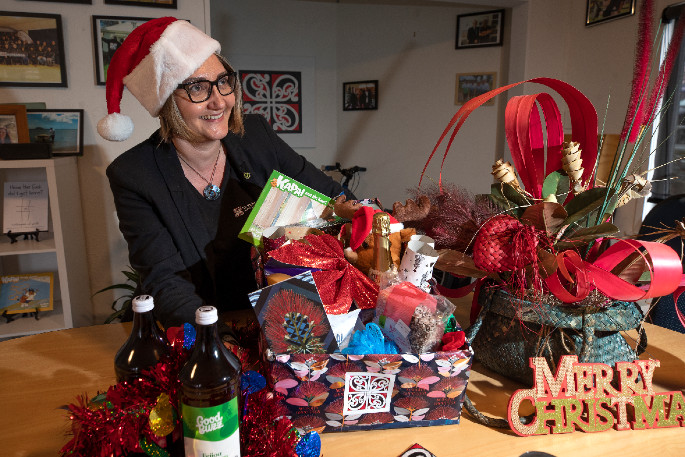 Dora Boca from Te Tuinga Whānau with one of the kindness boxes. Photo: John Borren.

It will be a Christmas filled with kindness and joy for many of Tauranga’s homeless this year, when ‘Santa Carrus’ - in the form of Te Tuinga Whānau staff - personally deliver boxes of goodies.

Currently living in emergency housing administered by Te Tuinga Whānau, 100 families will be opening their doors one Friday evening in December to the sight of Santa’s sleigh on wheels.

“It’s always all about the kids,” says Te Tuinga Whānau imagination officer Tommy Wilson. “We have a big tow truck, and we’re looking at having a sleigh with a piano on the back when we go and sprinkle joy to those families.”

Since 1987, Te Tuinga Whānau has been strengthening families, supporting at-risk youth and responding to community need.

The Christmas party in 2019 was held at the camping ground next to the Mount Hot Pools, with Pato Alvarez of Pato Entertainment dressed as Hana Koko. In 2020, the village green at Tauranga Historic Village was bursting with families enjoying bouncy castles, a bubble machine and a sausage sizzle, with guest celebrities Elmo and Poppy dropping in.

This year, with Covid restrictions around gatherings and parties, Te Tuinga Whānau have got their imagination hats on. They’ve come up with something different in the form of Santa Carrus Christmas Kindness Boxes, and they’d love the community to help fill them.

“Good Buzz have provided 100 bottles, and Comvita have provided honey,” says Tommy. “We’ve also reached out to Priority One and Holland Beckett, and we’re leaving it open to anyone to give anything to the frontline of homelessness.

“People can donate soap, chocolate, toothpaste, food items - anything that helps us take joy to the homeless. What we’re doing is making sure it gets to actual homeless families and kids.”