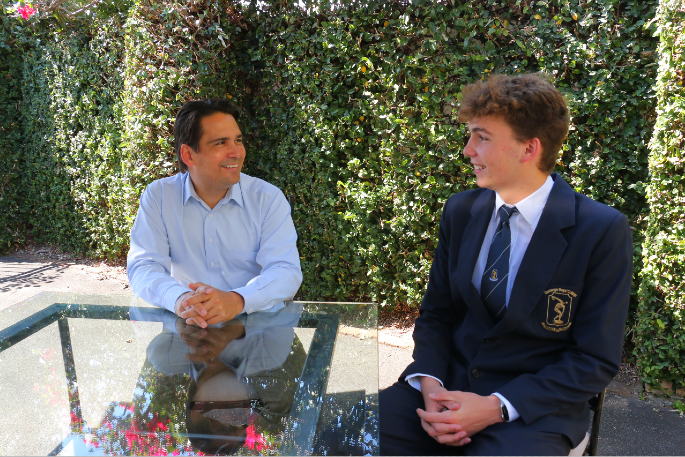 As a Youth MP, Ben Cosford will not only get to spend time in parliament representing Tauranga, he will take part in community events - something he’s really excited about.

“It will be awesome to get out in the community and talk to people,” he says.

Ben has been named as Simon Bridges’ Youth MP for 2022, and will head to Parliament in July next year and sit in Simon’s chair on the opposition bench.

The Tauranga Boys’ College student does economics and accounting, and it’s the political debates in economics that lead him to apply for the role.

“When you sit in an economics class you go ‘man, that National Party, they actually get this stuff’,” says Ben.

Simon chimes in laughing, and insists he didn’t pay Ben to say that.

It is Ben’s keen interest in business and politics that lead Simon to choose him. Simon had a number of applicants who completed video entries about why they’d make a great Youth MP.

“What impressed me is that he seemed very practical,” says Simon. “He showed he has an interest and understanding of politics.

“He is obviously thinking economically and about business. Dare I say it, we like that sort of thing in the National Party.”

Ben is looking forward to learning more about the inner workings of parliament.

“We want to make sure that young people understand what it’s all about in a deeper way.

“This is actually about democracy and keeping our democratic traditions going.”

Ben says the biggest issue facing New Zealand at the moment is getting the economy going.

“The economy might be holding up now while they keep throwing money into it, but 12 months down the track, when government subsidies dry out, you’re going to be in real trouble - especially with interest rates rising. A lot of businesses are taking on a lot of debt.”

The 17-year-old says the challenges students face include Covid disruptions to schooling and the future housing market.

“Housing is extremely expensive. People go to university, then they might earn $80,000 in a year, but the house prices have gone up $200,000, so they’ve just gone backwards.”

Next year will be his last year at college. He then plans to study engineering at the University of Canterbury or University of Waikato.

Although a career in politics isn’t in Ben’s sights just yet, it could be in future.

“I want to get something else behind me first, go out into the world and create some value for the economy and society.”