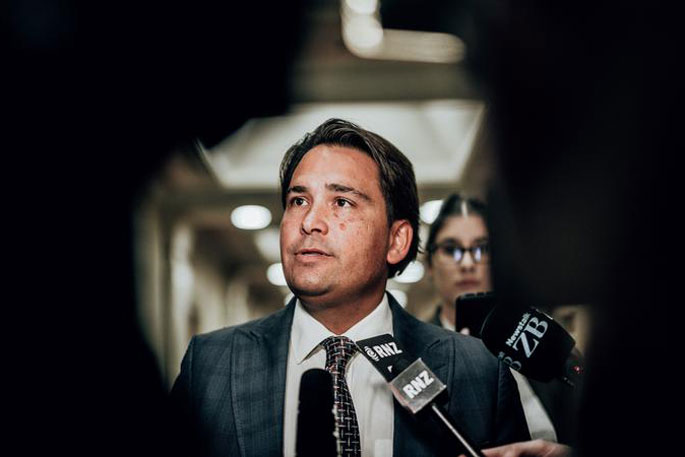 National MP Simon Bridges has spoken about the allegations against him that ultimately led to the end of Judith Collins' tenure as leader, saying he is not ruling out taking another tilt at the leadership.

Bridges was demoted and stripped of all portfolios last night over allegations of an inappropriate comment made to Waitaki MP Jacqui Dean five years ago at a party function.

Collins today lost a vote of no-confidence and Dr Shane Reti was named as interim leader.

Speaking afterwards, Bridges clarified his version of the events surrounding the allegations.

"Five or six years ago the National Party caucus had a full day at Premier House,” he says.

“At lunchtime I was out talking with a number of members of Parliament and at some point Jacqui Dean joined that. We discussed our wives, our children, I can remember talking about the fact I had two boys, and I wanted a girl.

"I engaged in some old wives' tales about that and how to have a girl and I entirely accept and am regretful of that day because I acknowledge that some of what I said was clearly inappropriate."

He says he has since apologised to Dean.

"Bill English, who at that time was deputy Prime Minister called me into his office and discussed this. He made clear that Jacqui Dean was offended, deeply offended, by what had been said. I was unaware of that but very regretful and apologised for that and learned a valuable lesson at that time.

"I then went and apologised fulsomely to Jacqui Dean and she accepted that apology. I regret what I said - I wasn't aware of its impact on Jacqui. Now I have certainly been made aware of its significant effect."

He says he had offered an apology again today, and shared her desire for a modern inclusive workplace and work environment.

He says Collins made a mistake in issuing the press release last night.

"I said it was a desperate move,” he says.

“I stand by that, that's my view, and she shouldn't have sent out that press release.

"I made it clear this morning... that I didn't have confidence in Judith Collins. I was - let's put it euphemistically - very unhappy with the press release last night. There had been a very brief, very poor process from Judith Collins where I had not been informed of what the matter was.

"I thought it was a poor process, I thought it lacked any due process coming from a lawyer."

He would not rule out taking another tilt at the leadership, saying he would consider it over the next day or two.

"I want to consider that over the next day or two. I think today in particular I'm an older, possibly wiser guy than I was - certainly five or six years ago, but even a couple of years ago when I was leader of the National Party.

He gave assurances his statements over the past days about having no intention to stand for the leadership had at that time been genuine.

"There wasn't a vacancy,” he explains.

“I was genuine in my clear statements ... about not having an intention to stand with where things were at. That's changed. I'm going to consider it.

He says Collins' leadership was during a time of rebuilding and she deserved some credit for that.

"I've been the leader of the National party, it's a tough job, and I acknowledge - although we've had many many differences - Judith Collins in doing that role, and giving it her all.

"I think it will be remembered as a difficult time, we weren't as on top of the issues that matter to New Zealanders and the solutions as perhaps we could have been, but it was also a time of rebuilding and Judith deserves some credit for that."

He also has some warnings for whoever it was took over her role however.

"I do know the toll it takes and I do know that National is building off a very low base ... there is a huge amount of work to do for whoever becomes the leader.

"We've repeated mistakes a number of times ... I think the new leader of the National Party will have to think through how they best deal with the board and the current president."

Dean has also issued a statement regarding the recent events. She says Bridges apologised at the time of the incident "about five years ago" but that his "inappropriate" remarks had continued to play on her mind.

She says Bridges has reiterated his apology in the past few hours.

Does not a leader make. Before Crusher he was one of the most unpopular leaders ever. Nothing has changed. There is only one choice for leader. It’s obvious. He was brought in for the job. He will run rings around Cindy.