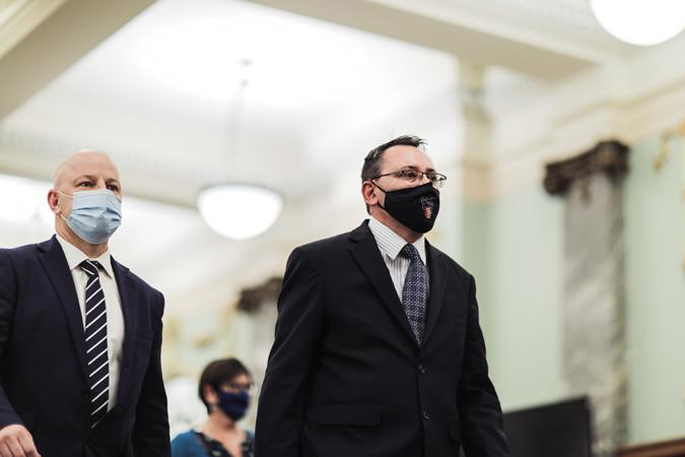 Former National Party leader Judith Collins has been forced to step down after her caucus issued a motion of no confidence in her this morning, interim leader Dr Shane Reti confirmed.

Reti has held a press conference after a backlash against Collins' sudden demotion of Simon Bridges saw her step down.

Collins was voted out as National's leader after the party was locked in a caucus for more than three hours.

The former leader confirmed the news on her Twitter feed.

I am pleased to say that I am just the MP for Papakura again. It’s been a privilege to take over the leadership of @NZNationalParty during the worst of times and to do so for 16 months. It has taken huge stamina and resolve, & has been particularly difficult because..

Reti says the National caucus met this morning to discuss the press release put out by Collins last night.

Bridges hit back this morning saying it was "truly desperate stuff" from Judith Collins who would go to any length to hold on to her leadership.

Reti says the caucus was concerned with the content of the press release and the process by which it was issued.

"The caucus moved a motion for a vote of no confidence in the leader and that motion was successful.

"As a result the honourable Judith Collins is no longer leader of the National Party."

Reti confirmed he will take over as interim leader until the caucus meets again next Tuesday to choose a new leader.

"On behalf of the caucus I'd like to thank the honourable Judith Collins for her valuable service to the party."

He says there was "always a sadness" in cases like this, but "we get up and lift our eyes to the horizon and get on with our work".

He says his job at the moment is to shepherd and guide the party through until the leadership decision is made.

Reti says he had not himself contemplated yet whether he would put himself forward for the position, as it was more important right now to shepherd the party forward.

"Judith had an allegation that she needed to attend to, it was a serious allegation and so she took advice and made the best decision that she could last night."

He repeatedly said he does not reveal discussions in caucus, nor private conversations with his caucus colleagues.

National MP Jacqui Dean has issued a statement regarding the recent events. She says Bridges apologised at the time of the incident "about five years ago" but that his "inappropriate" remarks had continued to play on her mind.

She says Bridges has reiterated his apology in the past few hours.

I have worked for female Bosses and I have managed teams with female members. When morale is good there is a lot of banter and some of it could be considered sexist and non-PC. Nobody takes offence when none is intended. (And the girls are just as bad as the boys at this...) You are right, she has to go. This was obviously all about politics.

Although this is a horror show, revealing all kinds of weaknesses and undesirability in elected MPs, it MIGHT be the best thing for the National Party. Maybe we can get some grown-ups now who are prepared to focus on real issues instead of their internecine petty squabbles and power-plays. We need a good Opposition Party now more than ever before. Perhaps one can emerge out of this.

She needs to go. He made a crass joke. So what. He apologised. She brings it up 5 years later. I think back to the start of my career when I was working in a whole team of women. Wow, what an eye opener that was. Lots of banter and lots of sexist filth. I might ring my old company up and lay a complaint.