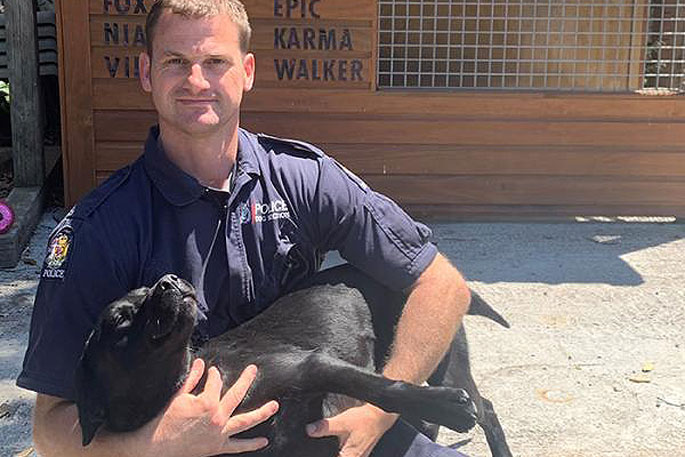 Sniffing out hidden illicit cash and narcotics is what detector dog Nia has been trained for, and she’s a pro!

But it’s not just finding ill-gotten goods from criminals that Nia's good at. She’s great at playing lost and found too.

It’s not your usual Dog Section story but it’s a great example of police staff caring for elderly members of our community, and building trust and confidence with them.

The 87-year-old man had been saving for something special and keeping this money in his home.

He was understandably upset when one day, he couldn’t find the cash he’d been squirrelling away.

He had searched his house for a while and was stressed out by not knowing what had happened to it.

As he'd recently had people in his home, he feared it had been taken and shared his concerns with his neighbour, who is also a police officer.

Thankfully, the officer knew the perfect pair to help – Junior and Nia.

Junior and Nia paid the man a visit to help him search his home and Nia soon indicated there was something in a set of drawers.

The man was sure he’d already searched them but Nia’s keen detecting nose kept bringing her back to the same spot.

The cash was subsequently found in an envelope there, hidden under a pile of mail.

The pensioner was over the moon and thankful for Junior and Nia’s help locating the money he thought he’d lost.

Junior says it was a different but equally rewarding change from the usual jobs the duo attend - and this time, they could give the cash they found back!

“A little bit of effort from myself and Nia went a long way to providing the stressed elderly gentleman with peace of mind," says Junior.

"Nia’s a versatile detector dog and it’s fair to say she has a new fan.”

Before leaving the grateful saver, officers had a chat with him about the different ways to keep money safe and secure.

Fantastic work by Nia and Junior, and also to the officer for being a good neighbour!

It’s good to read a happy story for a change with all the divisive political stuff and generally bad news local and nationally .