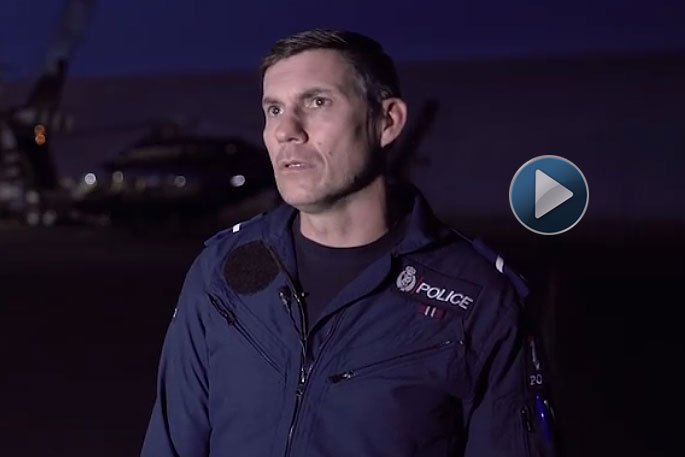 “At the end of the day, you are putting people’s lives at risk.”

The warning comes as the number of laser strikes affecting Police helicopters and commercial aircraft continues to rise year on year, particularly during the winter months.

In the past month 17 months alone (July 2020 to November 2021) there have been 20 reported laser strikes just on the Police Eagle Helicopter.

Police have released a video to highlight the dangers of the laser strike, which includes infra-red footage of an incident in Papakura on August 4, 2020, where a laser was pointed directly into the cockpit of the Police Eagle helicopter.

Tactical Flight Officer Constable Stephen Mack was one of four people on the flight during the incident and says the lasering could have ended in tragedy.

“We got hit by a green laser.

“It’s a disorientating situation, it’s quite a bright, sharp light that comes through. Our main concern was our pilot.

“If he was disorientated in any way, he could have potentially lost control of the helicopter, and it only takes a few seconds for that to happen.”

Constable Mack says there were also a number of other aircraft in the area at the time, given its proximity to Ardmore Airport, so it put the people aboard those planes at risk too.

“We just want to get the word out there that this sort of behaviour is really dangerous for us, and everyone else in the air.”

Police were able to swiftly locate the man responsible, and the 46-year-old was arrested and charged with breaching the Civil Aviation Act 1990.

Police can now release the footage since he has gone through the court process.

“We thoroughly investigate every single lasering incident and our intention is to prosecute every one of those incidents, because at the end of the day you are placing many people’s lives at risk, and it’s appropriate people are held to account for it.”

The Civil Aviation Authority received 143 reports of laser attack incidents across New Zealand last year, down from the 235 incidents reported in 2019 however the 2021 figure already exceeds last year.

The trend over the last five years has been steady – the impact of Covid-19 lockdowns and restricted mobility may have affected the last 2 years activity.

So far this year, 161 laser attack incidents have been reported across the country.

The CAA's Deputy Chief Executive – Aviation Safety – David Harrison says pointing a laser at a plane could cause temporary blindness and affect the pilot's ability to control the plane and consequentially puts lives at risk.

“Laser attack is happening at a critical stage of the flight, either take-off or landing, where the pilot is in control of the aircraft.

“At these low-level, high-workload flight phases, the consequences of any temporary pilot-impairment or distraction are potentially catastrophic, endangering those in the air and on the ground.

“People are not aware of the significance of it.

“It's sort of a lark, or a fun thing to do, not recognising that actually they're causing a real safety issue and creating a danger for pilots and passengers.”

In a larger aircraft they could pass control to another pilot, but for helicopter pilots flying over the city it becomes quite an issue.

Pilots often report the incidents to air traffic control, who notify the police.

If anyone who knows of someone with a laser pointer, they should make them aware of how significant it was to point it at an aircraft.

“CAA will take enforcement action if it obtains details of anyone who endangers an aircraft with laser attack.”

If a person is charged with ‘endangering transport’ the maximum fine is 14 years imprisonment.

Captain Robinson, also the director of the International Federation of Air Line Pilots' Associations for NZALPA, says with up to 150 people on every large domestic flight in New Zealand, and 300 or more on each international flight, every laser strike puts many lives in danger.

“Laser strikes tend to occur during the most critical times in a flight, at either take-off or landing.

“This is where our pilots need to be concentrating most as generally the autopilot is disengaged during these stages of flight – so we are hand flying the aircraft. Any distraction really heightens the risk,” he says.

“The CAA’s own data shows that the number of laser illuminations continues to rise.

“We urge anyone with these laser devices to seriously consider the dangers and consequences of such behaviour.”

Wouldn't you think a 46 year old might have more sense?

His intention was obviously malevolent; this is not kids playing with a dangerous toy. He should have incurred a short jail sentence to think it over...

Too many wet bus tickets

Until our courts start handing down the maximum sentence this sort of thing isn’t going to stop. It is that simple.