No movement on Wairoa cycleway 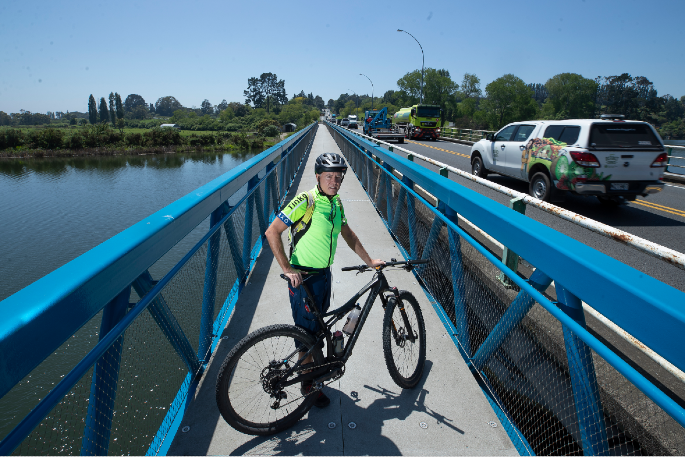 Frustration continues to mount for the region’s cycling community, with the final stage of the Ōmokoroa to Tauranga cycleway still in limbo.

The final section is between the Wairoa River Bridge and Carmichael Road on State Highway 2, and cyclists have voiced concerns about riding next to heavy traffic with no separation.

Exiting the cycle bridge towards Bethlehem is also deemed as dangerous, as the surface is coarse gravel and riders arrive on the roadside less than 1.5 metres away from vehicles, says Bike Tauranga founder Shane Plummer.

The cycleway is a 19km route, made up of new and existing off-road shared paths and local road connections, links Ōmokoroa to Tauranga. Cycleway construction began in 2016, and the cycle bridge over the Wairoa River opened in mid-2020, but there has been no progress on the last section.

The Weekend Sun wrote a piece in September 2020 voicing a local cyclist’s concerns, and those safety issues remain.

Shane says cycling towards the oncoming traffic is a huge risk - as is the half-finished nature of the bridge exit.

“The risk has been there for an unacceptable period of time now,” says Shane.

The cycle advocacy group founder wants to see the gravel at the exit of the bridge concreted and the spot where it meets the road moved, making it safer for cyclists.

He has also suggested cutting a temporary and low cost roadside track on the grass verge of State Highway 2, and has even offered to do the work himself.

Plans for this section have changed more than once, but the latest information is there would be a three metre-wide concrete cycleway from the Wairoa Bridge, past the Wairoa Marae, connecting to the Tauranga city cycleway network at Carmichael Road.

No further plans have been released, and there is no official word on the reason for these delays. Western Bay of Plenty District Council were the lead agency for the project, but they have since handed it over to Tauranga City Council.

For this article, WBOPDC referred The Weekend Sun to Tauranga City Council to answer questions about what the new plan is, what the timeframes were and if any safety measures would be put in place in the interim.

Tauranga City Council director of transport, Brendan Bisley, responded by saying: “Tauranga City Council was not originally involved in this cycleway project, but we offered to become involved earlier this year because the safety of our communities is paramount and we want to help make sure there is a safe connection for cyclists between Wairoa Bridge and Carmichael Road.

“We can’t comment on things that happened before our involvement, such as project timeframes and input from local cycling groups, and we’re still working through the plans, but we’re looking forward to being in a position to share more detail with the community in the next three or four weeks.”

cyclists already have along the easternlink and they hardly ever if never use it, they rather keep using the roads for their bicycles and creating hazards for motorists. dont lump every ones taxes into your fantasies. our tax moneys better spent on our roads not walkways

I am on the road a lot and pass over the bridge many, many times a week. In all that travel I have literally seen one cyclist only. Whether he was wearing lycra I do not know and neither do I care. To Shane Plummer I would say, alternative transport is a great option, we as motorists are told it all the time, almost daily - so take a bus or perhaps even a car. Cycling on our roads is way too dangerous and you need to realise that council just do not care. They’re not cycle lanes, they’re suicide lanes.

poor DIDUMS wants action, gosh that whole piece of road from bridge to top of hill needs a complete resurface, and you want action,DO YOU pay road users NO but you want action ,for crying out loud, you have always got one KAREN in the bunch,me tinks you should ride over rail bridge,agree with lets get real,always whingers on bikes ,GOSH have they not spent 21 million on bike tracks ,look at that one from poieke rd to welcome bay all concrete, gosh, whats wrong with crusher dust, my thoughts only on this Sunlive who by the way are No1 in News here,Thanks my 7 pennies worth for what its worth,10-4 out. phew.

If we were seeing swarms of any aged users on any of our cycle paths your dreams of future usage might hold some truth. I’m out and about around all parts of the city a lot more than most and I’m yet to see swarms of cyclists other than up and down marine parade or the occasional group of around a dozen organised by a cycle shop or elderly group with their electric bikes. Claiming usage a few times a week (if true, TP Locsl Res) is NOT daily and hardly constitutes an urgent need for ratepayers money to be doled out to grant one or two people a week special privileges. It’s just free money to some people, to be spent exclusively on their hobbies exclusively and there is absolutely no thought given to the increasing rates take from all householders, whether they can afford it or not.

@Let’s get real, the cycle track is a done deal. Once it is safe to use you’ll see a swam of kids out cycling the track with their overseers experiencing the fresh air and outdoor wonders. Also, note the exasperation of present users that could volunteer time to put in a temporary fix, knowing once they turn up with shovels they will be chased off by City Council paper shufflers wielding the Health and Saftey Act.

No movement on cycleway

Once again ’Let’s get real’ has commented on a situation they know nothing about. I ride that cycleway several times a week and have never worn lycra in my life. I would estimate that several hundred bikes a week use this trail but many stop at the bridge because that stretch up the side of SH2 is so dangerous. I’m always very nervous when I do it, especially coming down toward the bridge from Carmichael. I don’t want to see a sad statistic before something finally gets done.

Land ownership is worth more than Lycra Clad Cyclists

Because you want to cycle around in the weekends you expect the Wairoa Hapu to accommodate you. Why didnt the Council build a cycle track on the river where the Pakeha live and use their land to build it. Again, racism comes to the core, you think Pakeha have the right to Maori land for their cycling community. There is a big orchard up that hill that would have been ample room for a stupid cycling track, use that, as usual, money wasted for the minority white folk. The new motorway should have been built before any of that rubbish. Who the hell is going to bike to work from Omokoroa every day, crazy councillors and their minority rich groups wasting taxpayers money.

I live on the Wairoa Rd. I have not seen anyone using the blue bridge but have seen plenty using the road instead. What a waste of my rates

No movement on cycleway

Will also be the end result... Once again we have an opinion from a small group demanding special treatment of nice-to-have amenities ahead of must-have requirements. Just because a dozen people in Lycra would like to ride a pushbike once-in-a-while on a sunny day, ratepayers have to forego quality services for lack of funds. How many more of our once rates funded services will we now pay for separately so that we can cater for small groups of whiners.

Spent all that money to build a cycleway on the bridge only to have a dangerous merge with the traffic. Whoever sign this off in the council should be made to walk the plank