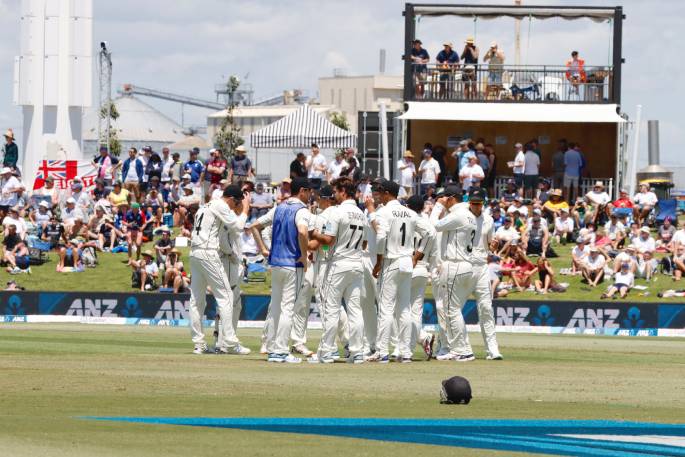 The Blackcaps in action at the Bay Oval in 2019. Photo. Daniel Hines.

The Blackcaps have announced their international schedule for 2021-22 and will kick off their season on New Year’s Day in Mount Maunganui.

New Zealand men’s cricket team will be at the Bay Oval on two occasions this season, facing off against Bangladesh in a New Year’s Test match and the Netherlands in Twenty20 action in March.

Last year saw Pakistan visit the Mount venue for a Boxing Day test, but with New Zealand returning from their international excursions later than usual in 2021, this year’s holiday Test match falls over New Year and the Bay Oval got the nod to host it once again.

Bay Oval general manager Kelvin Jones says he is honoured to be welcoming the Blackcaps back to New Zealand for their first fixture on home soil since being crowned ICC World Test Champions in June.

“It will be the first test that the Blackcaps play at home since they became world champions so that is a bit of a coup for us,” says Kelvin.

It will quite literally be a homecoming for some of the New Zealand stars. Captain Kane Williamson and bowlers Trent Boult and Neil Wagner all call the Bay of Plenty home.

“I know it seems like a long time since they have played at home so this will be a nice chance for us to acknowledge that and support the team,” says Kelvin.

“What they did was pretty incredible so it is a double honour for us to have the first home game after that match.”

Kelvin says it is also a timely return to tradition for a New Year’s Day game of cricket, hopefully in the January sunshine.

“Traditionally we used to have a Northern Knights game at the Bay Oval which was always well attended,” Kelvin explains.

“So this is almost like a tradition or maybe even the start of a new one.”

The spectre of Covid-19, as always, looms, but Kelvin has his fingers crossed that by January protocols will be in place that allow for a healthy crowd to be present.

With the Women’s Cricket World Cup and the Black Clash charity rugby v cricket match, which he expects to be the Oval’s most attended event, all upcoming Kelvin is excited for the future of the Bay Oval.

“Northern Districts are back in action here this week and we have the Black Clash coming up, which will be a bit of fun.

“It is nice to be hosting these different things.

“We have even got a polo game at the end of the season. So we are really becoming a true event venue which is great because it means more of the community coming to enjoy events at the Bay Oval.”

The Blackcaps face Bangladesh from Saturday, January 1 to Wednesday, January, 5 2022 and the Netherlands on Friday, March 25 2022.