Tagging of testing marquee a ‘kick in the guts’ 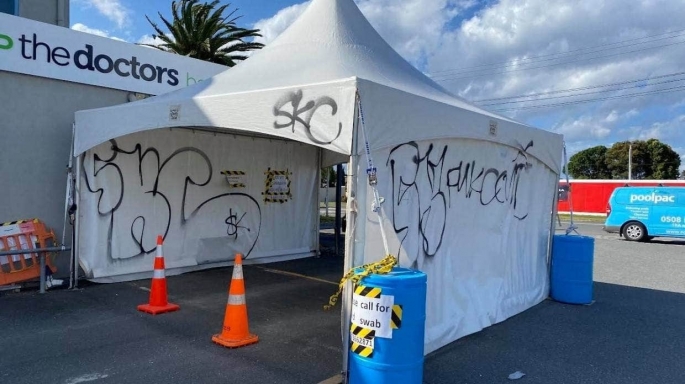 A marquee used for Covid-19 testing has been vandalised at The Doctors Bayfair in Mount Maunganui. Photo/Tauranga Party Hire.

A medical centre in Mount Maunganui has been vandalised with anti-Covid graffiti.

The same words were spray-painted on a fence at the medical centre.

“We are here to help people, and it’s just really not hard to be kind. I know everybody’s doing it tough out there at the moment, but we’re that one service that provides care to patients,” Cook told Stuff.

She says to arrive at work on Monday morning and see the graffiti was gutting and “a bit of a shock”.

A nearby St John ambulance building and two search and rescue vehicles parked outside were also vandalised with graffiti, Cook says, “which is pretty stink”.

In late August, a Covid-19 testing marquee was stolen from another medical centre in Tauranga, and was never recovered.

The company that supplied both marquees, Tauranga Party Hire, took to social media on Monday night to say “it is a real kick in the guts for all involved”.

“We are a local family-owned small business that work our arses off. The last 18 months have been extremely tough on the events industry with lockdowns and restrictions, but we try to always look for the positives,” the company says, alongside photos of the vandalised marquee at The Doctors Bayfair.

“Whilst events have been slow, we have been proud to be helping out with the Covid-19 response across the BOP.

“We had a marquee stolen a few months ago and now a marquee vandalised over the weekend. It is a real kick in the guts for all involved as we are just trying to help protect the community.

“It’s hard for us to get our heads around the mentality of these people. We don’t get it!!”

Mat Delaney, St John Western Bay of Plenty territory manager, confirmed the organisation’s Mount Maunganui ambulance station was vandalised over the weekend, with one wall on the side of the property near the car park “being tarnished with spray paint”.

“St John is extremely disappointed that while our ambulance officers were providing care to the community, someone would deface the property. St John is now working to rectify the graffiti.”

A media spokeswoman for the police confirms a report had been received regarding wilful damage at The Doctors Bayfair, believed to have occurred between 2pm on Sunday and 6am on Monday.

To anyone who thinks this was done by the "anti-vax" brigade, take a good long look at the photo. This vandalism was done by the usual morons who spray paint anything that is not bolted down.

Sad thing is, one might assume that anti-vax persons may have done the spray bombing, and it is them that will most likely get quite sick and need the graciousness of the vaccinated to help them get well.

Fine to have your little thumb in mouth protests but this, like the 25kph driving is a step way too far. This is sheer vandalism and criminal behavior. The Police as they arrest people and/or check property need to be trying to marry this tagging with the brainless criminals. I’m SO sick of tagging on bridges, walls, fences. Who the hell do these morons think they are.