Call for Government to protect all finfish 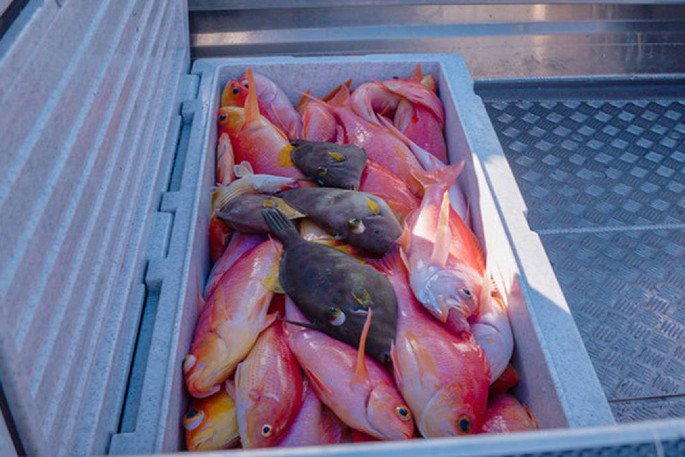 A chilly bin full of pink maomao was captured in a video in Tairua, shot by documentary filmmaker Mike Bhana. Photo: Mike Bhana.

Mama Fish, a non-profit organisation whose objective is to protect New Zealand’s marine life, is calling on the Government to mandate national marine fishing licenses, and also asks New Zealanders to support stronger protections for all finfish species before it’s too late.

“The Ministry for Primary Industries is currently doing a review of daily recreational bag limits for finfish. It is seeking submissions from the public until 18 November. The current daily limit for some fish is 20, for other fish species there is no limit, which is unsustainable.

“We have already destroyed up to 80 per cent New Zealand’s marine biodiversity. If we are serious about maintaining what is left, we need to protect all fish wildlife from exploitation. Five fish per person per day should be enough. Recreational fishers do not need to catch 20 each day.

“There also needs to be a maximum size limit for fish caught, in addition to minimum size limits, to protect the large breeding fish.”

Karlene says all finfish, not just some species should be subject to this daily bag limit.

“Many fish don’t currently have catch restrictions, so people can exploit this, catching an unlimited number of fish in one fishing trip. Dozens of species are facing extinction due to over-fishing.”

In June this year, Tairua residents noticed hundreds of pink Maomao were taken by a handful of recreational fishermen, day after day. Maomao don’t have a catch limit. The outcry from local residents has been heard by the government, and this review is now being undertaken.

“Mandating a national marine fishing licence, like the one in place for those wanting to fish in freshwater, would be a terrific move. This would set the bar required for killing marine wildlife.”

Reductions of some fish species is having a negative impact on all marine life. For example, the declining inner Hauraki Gulf seabirds’ populations have been attributed to declining forage fish (bait fish) stocks. Forage fish are at the base of the marine foodweb.

Studies have also shown that Bryde’s whale are switching from fish to krill due to a lack of available forage fish in the Hauraki Gulf Marine Park.

care more about fin fish than the unvaccinated I see. all about "being kind" aye jacinda.