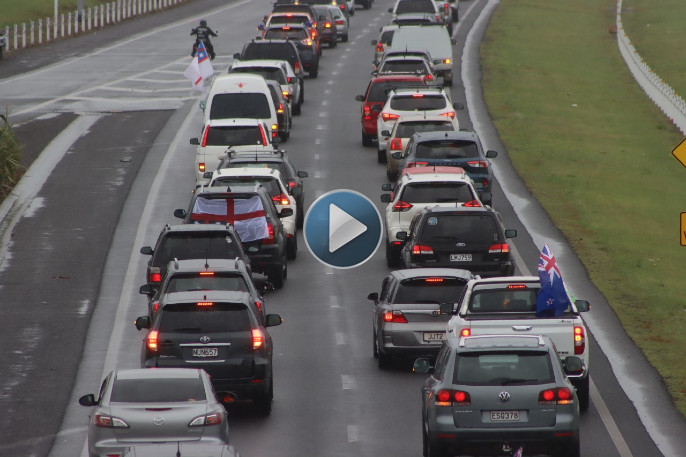 The motorcade travelling along the Tauranga Eastern Link. Photo/Video: SunLive.

Update 6pm: A convoy of cars, vans and motorcyles took to the main route through Tauranga today in the latest stage of polarising protests against Covid-19 restrictions.

Carbon dioxide emissions and fuel usage along with a concern about emergency services needing to attend the scene of a crash in Katikati were some of the issues arising from the afternoon's go-slow traffic snarl.

Despite organisers saying ahead of the protest that there would be space for emergency services to pass through, SunLive readers say that ambulances needing to go from Tauranga towards Katikati were faced with a traffic gridlock when the motorcade was nearing Bethlehem.

With horns tooting, the motorcade which has been blocking up the main route from Paengaroa through Tauranga, passed through Bethlehem at around 5.30pm before looping back to finish at Sulphur Point.

A Sunlive reader reports that traffic on 15th Ave was at a standstill, and that two ambulances with sirens on were having difficulty making their way through the motorcade.

Another SunLive reader who says they're all for freedom speech queries "why mess with everyone else on the roads".

The Government did not accede to the controversial coalition’s demands and on Friday evening its social media channels announced the action would go ahead. 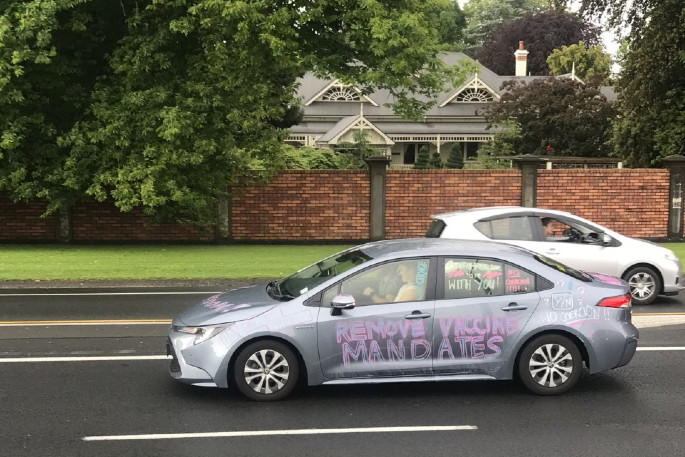 The motorcade near Bethlehem. Photo: Supplied.

Vehicular protests took place over the space of three to four hours in Auckland, Bay of Plenty, Hawkes Bay, Nelson, Wellington and Whangārei, while protesters marched through the streets of Christchurch.

The Tauranga route covered a distance of approximately 50km. Based on an approximate fuel efficiency of 8L/100 km for a hatchback travelling at city driving speeds, and using $2.60/L for 91 Octane, the route would cost $10.44 and take about an hour. The first section of the route on the Tauranga Eastern Link where the speed limit is 110km per hour also took drivers and riders through the toll gate.

Motorists driving too slowly and/or blocking traffic can be fined $150 and receive 20 demerit points. 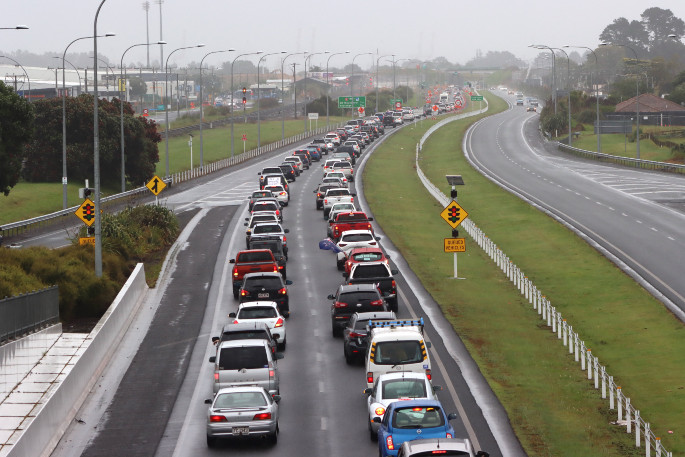 A motorcade of anti-lockdown activists driving very slowly and tooting horns is travelling west along the Tauranga Eastern Link towards Tauranga with the intention of blocking roads across city in the latest stage of polarising protests.

As vehicles and motorbikes came through under the Sandhurst overpass, some protesters could be seen sitting in their windows leaning out and waving flags.

The motorcade left from the Eastern Districts Rugby Club car park at Paengaroa following a briefing. Due to leave at 2.30pm, it got underway just after 3pm, moving at a normal traffic speed through the Paengaroa roundabout before slowing down at the start of the TEL.

It is estimated that the approx 50km trip to the Moffat Rd intersection and back to Sulphur Point will take around four hours if the motorcade travels at around 15 km per hour. 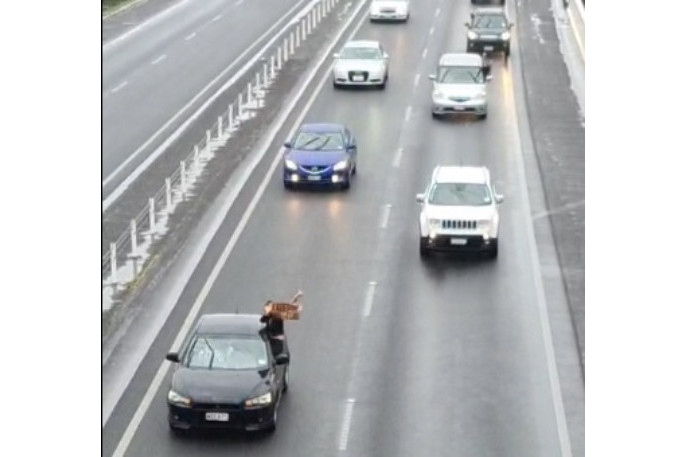 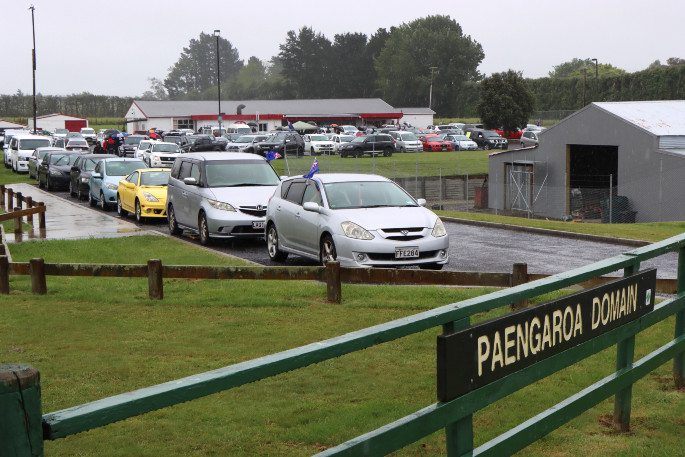 The motorcade of cars, vans and motorcycles driving and ridden by anti-lockdown protesters is slowing heading along the Tauranga Eastern Link from Paengaroa towards Tauranga.

"They went quickly first through the Paengaroa roundabout and then slowed right down once they got onto the Tauranga Eastern Link," says a SunLive reader.

SunLive readers also report that there are parked cars along the expressway beyond the toll gates waiting to join the motorcade as it comes through.

"There are lots of cars parked along the expressway down towards Papamoa and Sandhurst, just waiting until it reaches them."

One reader estimates the vehicles are moving at around 10 to 15 km per hour.

The motorcade is expected to travel to Hewletts Road before travelling over the harbour bridge to Moffat Road in Bethlehem, then looping back to Sulphur Point, a total distance of approximately 50km.  It's estimated that it will take nearly four hours to complete the route. 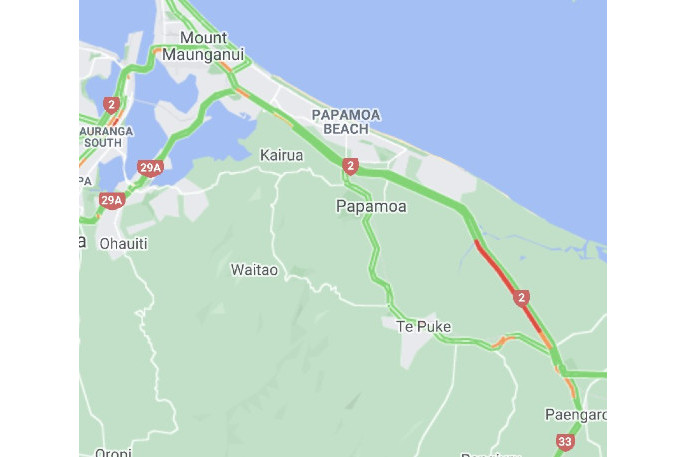 A motorcade of anti-lockdown activists is leaving Paengaroa with plans to block roads across Tauranga in the latest stage of polarising protests.

"There are over one hundred people on motorcyles, and cars full of people going through the Paengaroa roundabout and on to the Tauranga Eastern Link," says a SunLive reader.

The motorcade left from the Eastern Districts Rugby Club car park at Paengaroa following a briefing. Due to leave at 2.30pm, it got underway just after 3pm, moving at a normal traffic speed through the Paengaroa roundabout before slowing down at the start of the TEL.

The plan is for groups from Rotorua and Whakatane to join up with the Tauranga group at Paengaroa.

All vehicles will automatically have their registrations photographed as they pass through the tolls gate on the TEL.

Main routes across Tauranga city are expected to be gridlocked as the riders and drivers plan to deliberately disrupt and slow down traffic.

On the Freedoms & Rights Coalition Bay of Plenty Facebook page, Duke Wilson who appears to be one of the local organisers, has posted that they have "mapped out the best route for maximum impact".

The journey is designed to be a slow moving loop travelling at approximately 25 km per hour from Paengaroa, along the expressway, past papamoa, past Bayfair, along Hewletts Rd, over the Tauranga harbour bridge, along Waikareao expressway, up to the Moffat Rd roundabout in Bethlehem, before looping back around to finish up at the Sulphur Point car park.

Motorists driving too slowly and/or blocking traffic can be fined $150 and receive 20 remerit points.

The protesters say they have four demands for the Government: to remove vaccination mandates immediately, revoke the traffic light system, lift the Auckland borders and move New Zealand to level one.

A police spokeswoman says in a statement they are aware of the protest “and will continue to monitor activity”.

“Police officers will maintain a presence and will respond to events as appropriate at the time."

“As with previous large gatherings, police may follow up on any identified offences or breaches at a later time," says a Police spokeswoman in response to a query about the planned traffic disruption.

Wainot: You nailed it. Succinct and accurate. laugeo: An excellent, and necessarily simple response. There probably are some people in our community who HAVE lived in a Police State (I did for about 9 months) and there may be some who were exposed to the Nazi tyranny of WWII. But there are also the pretenders who believe they are standing for "Freedom" and would see themselves amongst the ranks of the real. They persuade themselves that they too are just like the real heroes who resisted... and, in fact, they have no vestige of understanding and are deluding themselves. If they were not idiots, their position would be insulting to the dead. I wholeheartedly agree with both your posts. 100%.

An example from history where short term selfishness costs lives

During WW2 along the American Atlantic coast, the lack of a coastal blackout served to silhouette Allied shipping and thus expose them to German submarine attack. Coastal communities resisted the imposition of a blackout as an attack on their freedom. The result was a disastrous loss of shipping, dubbed by German submariners as the American Shooting Season.

They confuse freedom with their own selfish wants. Sometimes society needs to work collaboratively and give up short term freedoms to protect the long term freedoms.

You can't comply your way out of tyranny

Look at all these compliiant obedient commenter thinking that compliance to tyranny will get our freedoms back. If you ever wondered if you’d have been collaborators or Resistance to the nazis, I think we all have a fair idea now. Good on you protestor!! Totalitarian tyrants and their sympathizers won’t like it, but I do.

Absolute morons!!! What about the rights of the people who are vaccinated and want to get on with life with having to sit in traffic jams....idiots!!

Will never and have never

Supported this form of protest. The only people that are disadvantaged or inconvenienced are the innocent people going about their own business. I see the current government as being the worst ever and if there was a method to lobby the governor general to dissolve the current Parliament and establish another election, I would certainly add my name to the petition. However, I fear that we will all have to endure another two years of dictatorship and ineptitude. Marches and rallies are dismissed by all parliamentarians as irrelevant and unrepresentative of all opinions.

I saw this ’protest’ pass through the mount today. It was amusing. All those people with single digit IQ’s identifying themselves by turning on their hazard lights and driving slowly.

Woke cops are a waste of space

Monitoring the activity means doing nothing. They may issue fines but few will get paid. Start worrying about the rights of the majority, not the protesters.

i hope the police are taking rego numbers and follow up with fines for impeding the flow of traffic. they talk about their rights, what about everybody elses right to unimpeded travel. how dare these idiots take away my rights

hypocrisy at its finest...

Protesting "for freedom" by trying to take away other peoples freedom of movement...

a mob of drongos. I sincerely hope the powers that be are scanning rego plates for fines.

So typical of most of this lot who seem to be anti just about anything including looking after their own health by getting vaccinated.

Wear a mask, have the vaccine and get a life.

I hope the police do nail them

I’m going to organise another gridlock event if my demands for free beer on Friday’s is not met. Freedom for Beer Drinkers!