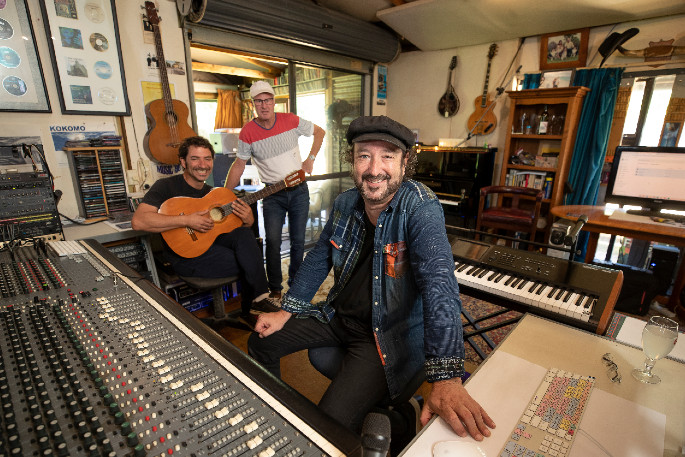 Blues and beyond is how Kokomo describe their style of the music. Although their bread and butter is blues and roots, their influences include country, jazz, reggae and a bit of gospel.

The six-piece band’s last album was dancefloor pop, and after 30 years together they aspire to keep it original.

“It started out as a blues band, but I think it’s taken a bit of a stroll,” says bassist Nigel Masters.

They have at least 120 original tunes in their repertoire, and release their 14th album, a retrospective, this weekend.

After three decades of live shows and tours, the guys have some stories to tell, including one involving bikers and a set with strippers.

With 14 albums and 30 years of music under their belts, Kokomo still have new tunes to share.

The Tauranga-based blues and roots band release their 14th album - A Little Something From The Attic - on November 14, but already have number 15 in the bag. Derek has written the 16th as well.

Staying together for 30 years and keeping it fresh seems simple to the six-man band, who credit being friends from the start as the reason for their longevity.

“We decided at some point that we didn’t really want to add musicians to the band who weren’t friends.

“If you’ve got to spend that much time together, then life is just too miserable if you hate each other, unless there’s a massive amount of money at stake,” laughs Derek.

Kokomo began in 1991 when Derek was asked to play a solo blues set for the Tauranga Jazz Festival.

Slightly intimidated by the prospect, Derek asked his friend and harmonica player Grant Bullot to join him. It went so well that they enlisted the original bass player, Roger Bullot, and were touring three months later.

By the mid-90s they were playing around 200 shows a year and working five nights a week touring the country.

According to Nigel, they’ve cancelled almost as many in the past two years, but they remain jovial about it.

Nigel joined in 1998 and one of his most memorable gigs was the last ever Sweetwaters festival.

“We were on the first night,” he says. “There must’ve been 10,000 people out in the paddock there. And this was about my fifth gig with the band.

“I thought s**t, this is actually a little bit serious.”

Derek’s most unforgettable show is what he describes as the worst gig they’ve ever done. Kokomo were booked to play at the Harley Owners Group convention in Auckland, but some some key information about the gig was missing.

“They scheduled us to alternate with strippers,” chuckles Derek.

“We went on and played, then strippers came on and stripped down to their negligees and G-strings and then went off.

“We had to play before the strippers came back on to finish off their routine. It was just awful.

“Those bikers were really, really unhappy,” he recalls, whilst laughing with gusto.

A Little Something From The Attic is a retrospective album but full of songs that haven’t appeared online before.

Kokomo are celebrating the release in scaled-back style with a free gig at Jack Dusty’s Ale House in Otūmoetai on Sunday November 14 at 3pm. Bookings are essential. For more information, call: 07 576 9059.