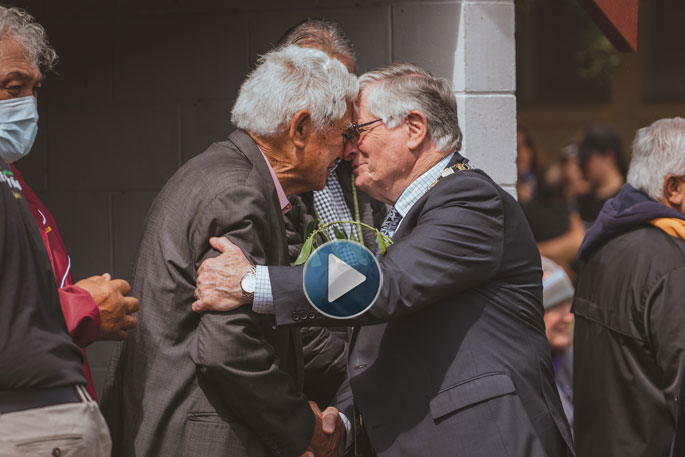 The people of Matakana Island are one step closer to seeing ownership of the eastern end of the island officially returned to them.

Haka pōwhiri and waiata from five hapū of Matakana and Rangiwaea Islands marked Western Bay of Plenty District Council formalising its commitment in writing to return the 172 hectares of land, commonly known as Panepane Pūrākau, to the local hapū.

The five hapū that connect to Matakana Island are part of Ngai te Rangi Iwi and include Ngai Tuwhiwhia, Ngati Tauaiti, Te Ngare, Te Whānau a Tauwhao and Ngai Tamawhariua.

Council inherited the land at no cost from the Tauranga Harbour Board under the Local Government reorganisation in 1989.

The signing of deed by all those present follows Council’s unanimous decision in October 2020 to return the whenua, supported by a record 7121 public submissions out of a total of 7381 in favour.

Western Bay Mayor Garry Webber says it was another emotionally charged day having worked alongside tangata whenua to explore the proposed return of ownership of Panepane Pūrākau over the past five years.

Traditionally Māori land ownership was not the sole right of one person and so it is only right that the land be returned not to an individual or singular group, he adds.

“We are one step closer to rectifying past wrongs through what has been a collaborative, inclusive, open working relationship with iwi and the public,” says Mayor Garry.

“Not only was it the right thing to do, but it shows that with open minds and a will to find solutions, good outcomes can be achieved for everyone.”

Since council’s October 2020 landmark decision, work has progressed on a subdivision application as well as an accretion claim for land that has slowly naturally accumulated at Panepane Pūrākau.

Next steps in the process include the Māori Land Court confirming that the Trust is the appropriate entity to receive the land.

Ngai te Rangi Iwi kaumatua Hauata Palmer appreciates that while it’s been a slow process to finalise the decision, the deed signing is a chance to celebrate the significance of Council’s decision and the collective mahi by everyone involved.

He says that the journey leading to the decision by Council to return the land had been a long one, with many challenges along the way.

He pays tribute to the work of Mayor Garry and the Councillors as well as staff in working with the hapū to see the return of the land. The welcome that was given to the Council delegation saw the full extent of tikanga Māori displayed, a sign of the significance of the decision and the occasion.

Under the transfer agreement a seven hectare public reserve will be created to ensure public access to the foreshore is protected in perpetuity and an esplanade strip will follow the coast to the ocean side.

This means the public will still be able to fish off the wharf, walk along the beach and use the recreational areas such as water-skiing lanes.

Port of Tauranga navigation aids will remain in the same location and the land will be forested.