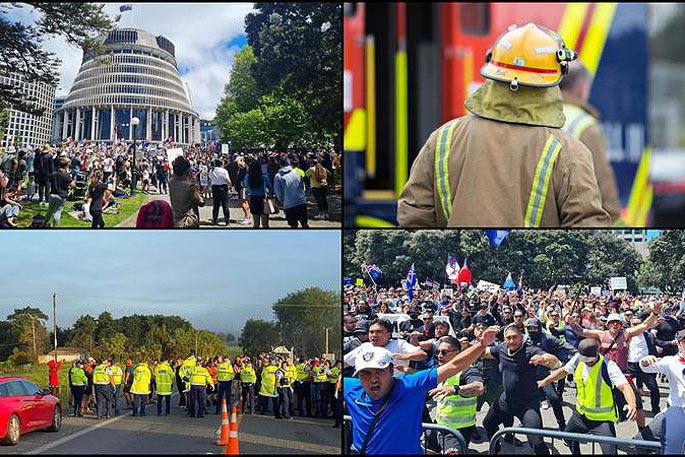 Thousands of protesters turned up at Parliament today, demanding an end to Covid restrictions, while another group blocked Auckland's northern boundary Tuesday morning.

Meanwhile, 125 new cases were reported and experts weigh in on the traffic light system.

Here is a summary of yesterday's Covid-19 developments. Protesters were out in force today at various locations throughout the country. About 50 protesters blocked the northern side of Auckland's northern boundary  for more than one hour, bringing traffic to a halt.

One bit a police officer, and police had to tow a number of vehicles out of the way, and physically move protesters off the road. 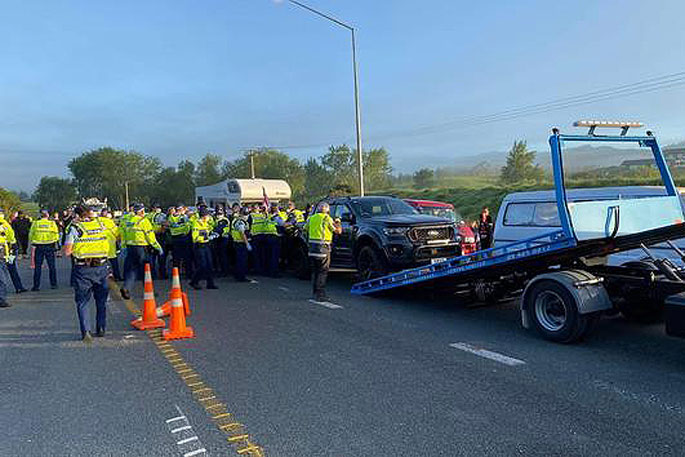 Police at the scene of protest on the northern side of Auckland's northern boundary Photo: Te Rūnanga ō Ngāti Whātua.

Hours later, in Wellington, thousands of protesters gathered in Civic Square, then marched their way to Parliament.

There, some people hurled abuse at media and police, threw tennis balls and water at them, while holding flags and signs with messages against lockdown, vaccination, the media and government.

Some tried to jump the railings, and security was ramped up.

Speaker of the House Trevor Mallard says security had never been so tight in his more-than-30 years at Parliament.

People were protesting an array of things like being segregated and the government having "trampled on the rights of New Zealanders".

Some espoused misinformation, including about vaccines, while others said they wanted New Zealand to live with the virus and not be concerned about the risks.

Other people were upset about losing their jobs because they would not get vaccinated. Others just wanted to be back with family in Auckland. 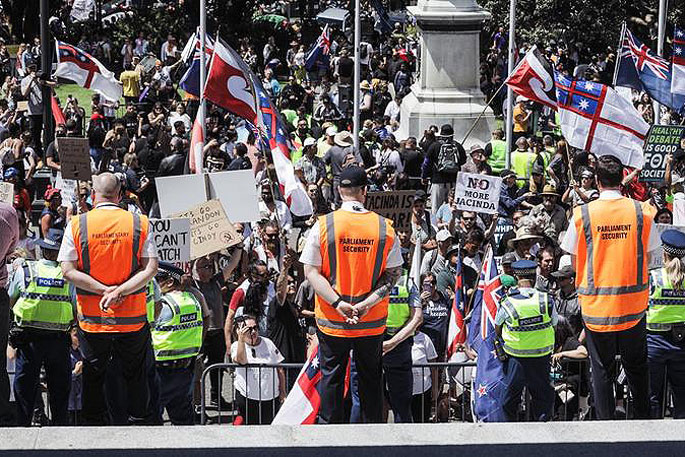 There were 125 new community reported yesterday - 117 in Auckland, two in Waikato and six in Northland. Fifty-eight of today's cases are yet to be linked. There were also three new cases at the border.

There are 79 cases in hospital, down from 81 yesterday, with nine in HCU or ICU.

Of the hospitalised cases, 25 are in North Shore Hospital, one in Waitākere, 25 in Middlemore and 28 in Auckland City.

To date, 89 per cent of New Zealanders have had their first dose and 79 per cent are fully vaccinated.

Meanwhile, as reported on Monday, 20 residents and four staff members of Edmonton Meadows Care Home in Henderson have tested positive for Covid-19. Seven of the Covid-19 positive residents remain in appropriate ward-level care at Auckland  hospitals.

Vaccinated people will need the pass in order to access many businesses and events when the country moves to the traffic-light framework.

Hipkins says the certificates are going through their final trials this week.

He will provide an update on them today.

Ardern has been under pressure to visit the city, but says she was limited by rules set by Speaker of the House Trevor Mallard.

The rules were relaxed last week, with Ardern saying that "felt like then an opportunity where I was able to do both, get to Auckland, talk with business representatives, be able to see some of the work our frontline health workers are doing and still be able to be here [in Wellington]."

She is expected to meet with workers, business people and frontline health workers on her visit to Auckland tomorrow, but is not expected to be out and about in public.

In a statement, ACT leader David Seymour says Ardern should visit hairdressers and hospitality businesses "if she really wanted to understand Aucklanders' situation".

Experts weigh in on move to traffic light system

Ardern says she expects Auckland will move to the Covid-19 Protection Framework - also known as the traffic light system - in just three weeks, once the city's eligible population is 90 per cent fully vaccinated.

But University of Canterbury professor Michael Plank says it's too risky to move to the new system while cases rise sharply.

Retail stores can reopen in the city tomorrow and Plank said that could see case numbers rise as high as 500 per day around the beginning of December.

However, Australian epidemiologist Melbourne University professor Tony Blakely says the high number of people in the city with at least one jab should encourage health officials to ease restrictions and take advantage of the community's "peak immunity".

Blakely's views are based on the experiences New South Wales and Victoria had while negotiating the lifting of restrictions there.

Firefighters were told 11 days ago they must receive their first Covid-19 vaccination by next week, or won't be able to work.

This has raised concerns about what emergency coverage will look like when their first vaccine deadline passes on Monday.

Volunteers make up four fifths of Fire and Emergency's 13,000 operational and community workers and some staff are concerned about the future of smaller rural stations if firefighters refuse to get vaccinated.

Other firefighters are frustrated that no proof of inoculation will be required as they are only being asked to make a declaration about their vaccination status.

FENZ says in a statement many staff must be vaccinated to undertake their roles as they work alongside medical practitioners and go into schools to provide education and respond to emergencies.

Police did not respond to questions about whether the mandate for firefighters would also apply to police, but said it was in discussions with the government about mandatory vaccination requirements.

Have a supposed ’right’ to protest but that doesn’t mean to block roads and hold up traffic. Those that block roads and/or disrupt traffic in any way should be arrested and charged. None of this mampy pampy PC crap. Mampy pampy PC is what has got us into this sort of situation. Noisey bikes, not wearing seatbelts, signs and flags hanging illegally of vehicles, hanging out the vehicles - confiscate vehicles, fine the occupants plus they pay towing and storage. No vehicle back until everything payed in full.

So if protest is ok then a counter protest should be to stop social welfare payments for those taking part. Film and identify these protestors probably already well know rent a crowd.. Also like Singapore charge medical treatment cost to the unvaccinated.