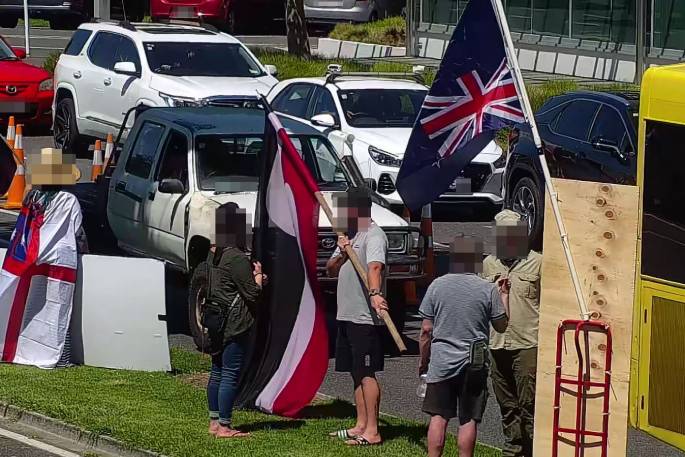 Protestors have gathered at the corner of Cameron Road and Elizabeth Street in Tauranga CBD. Photo. TCC.

Police staff have been monitoring a range of protest activity across the country today.

The New Zealand Police respects the right to lawful protest, and today’s activity was, for the most part, peaceful, says a Police spokesperson.

“However, it is disappointing that so many people chose to ignore various alert level requirements designed to keep us all safe.”

In Wellington, hundreds of people gathered at Civic Square this morning and headed to Parliament.

“Actions on Parliament grounds were largely peaceful, and no arrests were made today.

“Follow-up enforcement action will be considered by Police in coming days,” says the spokesperson.

In Tamaki Makaurau, Police cleared a group of protesters who were blocking a checkpoint operation at Auckland’s northern boundary this morning.

“The actions of protesters required our staff to physically intervene to move them off the road.

“In the process one of our officers has been bitten by an as-yet unidentified protester.

“Actions like this are totally avoidable and pose unnecessary risk to our staff who are simply trying do their part in preventing the spread of Covid-19. Further enforcement action has not been ruled out.

“Meanwhile, Police were on site monitoring a group of approximately 100 people outside Government House on Mountain Road, Epsom, for several hours this morning.

“In Invercargill, Police were aware of, and monitoring, a gathering there today.

“There were no significant issues, and the group dispersed after a short time.

“Police will look to follow up and take any enforcement action if appropriate.

“Police were also aware of smaller gatherings in Balclutha, Tauranga, and Whangarei.

“Again, there were no significant issues, and any identified offences will be followed up as appropriate.”

no doubt they are taking photographs of people exercising their rights so they can persecute them later.

Fly our flag upside-down. It has 2 meanings: 1. A nation in distress - these idiots might be in distress but we as a nation are not. 2. Meant to be offensive - well that works. How dare you. Even using American flags - get a bl**dy life. You live in New Zealand. What do you think you’re doing taking kids to these protests that could potentially turn violent. ABSOLUTELY DISGRACEFUL.

An organiser of a previous protest meeting in Auckland reveals that he’s covid positive and we still have large groups of people gathering.... Do you know who you’re standing next to....?