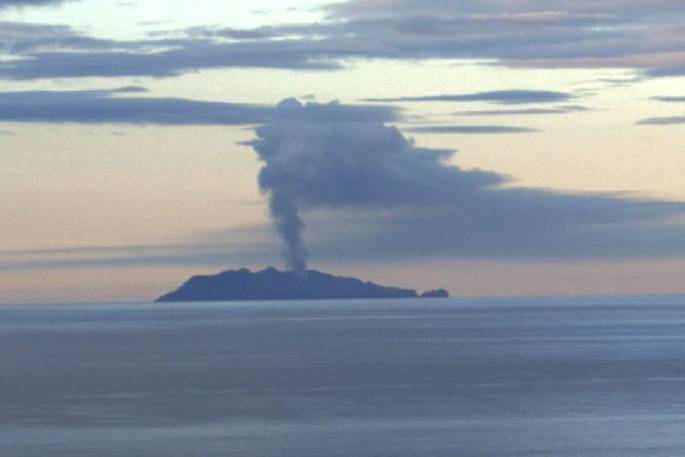 However, the vent temperatures remain steady at around 200-220 °C and the volcanic alert level remains at level two.

According to a statement from GeoNet the volcano occasionally emits traces of volcanic ash and remains in a state of moderate to heightened unrest.

The results showed that volcanic gases have increased since the last measurements on October 14. Sulphur dioxide has increased to 681 tonnes per day from 267 tonnes per day, emissions of carbon dioxide increased from 757 to 2712 tonnes per day, while the hydrogen sulphide also showed an increase, from 10 to 38 tonnes per day. These data show another pulse of gas escaping from the molten material at depth in the volcano.

Temperatures measured in the active vent area ranged from 252 °C to 202 °C during September-October. In July and August, the temperatures were in excess of 500-600 °C.

“The level of water in the crater lake is slightly higher than we observed in late October,” says GNS duty volcanologist Mike Rosenberg. “Nearly all of this rise is due to heavy rainfall.”

“Very weak ash emission was occurring during the observations last week, but the recent deposits are minor and only visible close to the active vents.

“Intermittent ash emission is still possible. The recent cloudy and humid weather conditions are allowing spectacular steam and gas plumes to be seen above the island, but also the weather is often obscuring views from the coast.”

Seismic activity from the degraded site is said to remain similar, with low levels of volcanic tremor and occasional low-frequency volcanic earthquakes.

“The current level of activity is consistent with moderate to heightened levels of unrest,” says Mike.

“As such the volcanic alert level remains at two and the aviation colour code remains at yellow.

“Equipment that provides real-time monitoring on the island remains degraded. We are continuing to work on restoration options.”

GNS state that volcanic alert level reflects the current level of volcanic unrest or activity and is not a forecast of future activity.

“While volcanic alert level two is mostly associated with volcanic unrest hazards, including discharge of steam and hot volcanic gases, earthquakes, landslides, and hydrothermal activity, potential for eruption hazards also exists and eruptions can still occur with little or no warning.”