Saunders in the hunt at Laser world championships 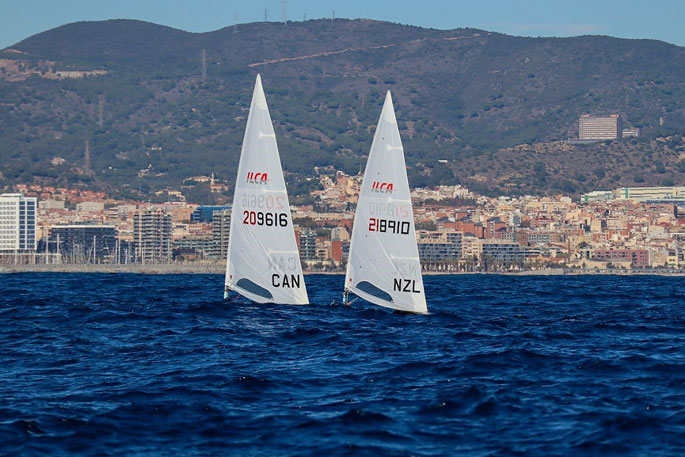 The Laser world championships in Barcelona have not exactly run smoothly, with two of the four days lost to a lack of wind, but Tom Saunders has coped well and put himself in a strong position with two days remaining.

The Kiwi is third, one point behind leaders Elliot Hansen (Great Britain) and Sergei Komissarov (Russia), heading into gold fleet racing. George Gautrey made a small jump up the leaderboard and is now 25th overall.

Race management hope to run three races on each of the remaining two days, so there is still plenty to play for, but it is a good return for Saunders who went into this regatta on the back of a sixth placing at last month's European championships.

He was seventh, second and 37th (his drop so far) in today's three races, with the first two sailed in an offshore breeze and the last in a light sea breeze.

"I quite enjoyed the breeze this morning," Saunders says.

"It was very tactical, and knowing when to push and when to consolidate was tricky. It rewarded consistency in a 70-boat fleet, and there was plenty of leverage out in the corners.

"This afternoon turned into a one-way track. I got the strategy wrong there and the fleet was pretty well spread after a few minutes so there was no way back to the front, unfortunately. It's still all to play for."

Stronger winds are forecast for the remaining two days, which will be welcomed by the majority of the fleet who have done plenty of waiting around over the last four days.

Barcelona is not normally known as a sailing venue at this time of year and would have hosted the world championships three months earlier had it not been delayed due to Covid-19.

The points can accumulate very quickly once all the top sailors are bunched into gold fleet and it will present opportunities for the likes of Gautrey to climb the leaderboard over the last couple of days.

The 2019 world championships bronze medallist admits it's been a frustrating regatta for him to date but he's also mindful it's his first international event in nearly two years and he's spent a lot of the last three months in lockdown in Auckland.

He added a 15th, 24th and sixth in his three races overnight and sits on 52 points overall.

"The racing has been tricky," Gautrey says.

"When I have found myself in good positions, I have made some stupid mistakes and they're costly in a fleet like this. It would have been really easy to come out of qualifying with a lot worse looking scoreline. I feel like I'm slowly getting there so will look to carry a bit of momentum into gold fleet.

"This is about getting back in the boat again and going racing. The conditions have been pretty exposing of weaknesses - lack of sailing, poor boat handling, a bit of rust - which is a shame but is to be expected. Hopefully in gold fleet racing I can keep it simple, keep my head down and let some other people make some mistakes."

The leaderboard is fairly congested, with only seven points separating the top six sailors. Two-time world champion Pavlos Kontides (Cyprus) is fourth and Tokyo Olympics silver medallist Tonci Stipanovic is one point behind in sixth.

Results and standings after day 4 of the Laser world championships in Barcelona: