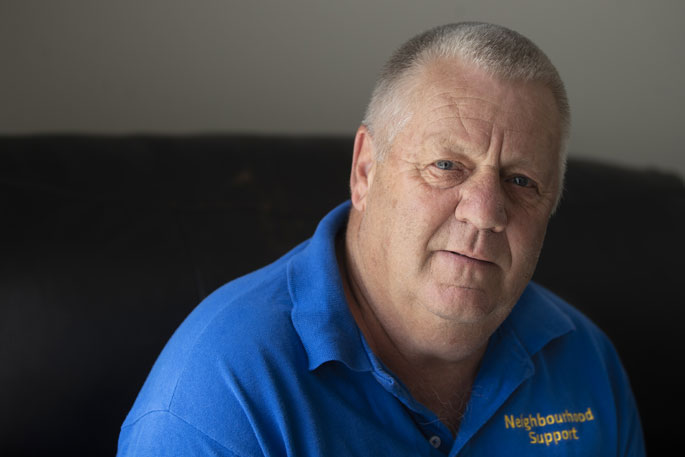 Western Bay of Plenty Neighbourhood Support manager Bruce Banks says the liquor outlet not going ahead is a good outcome for the community. Photo: John Borren/SunLive.

The Brookfield community is expressing relief after an application for a new liquor store was withdrawn.

The application was made to the Tauranga City Council environmental health and licensing team for a Super Liquor store in Ridge Plaza.

Brookfield School principal Ngaere Durie says it’s fantastic news that the store is not going ahead.

She had concerns about the impact it would have on students and the community, especially with the high number of elderly people living in the area and the social problems that come with a liquor store.

“That can be from alcohol-related harm, alcohol consumption, violence or other crime, driving and any motor vehicle accidents and especially binge drinking,” says Ngaere.

There are already three shops that sell alcohol within 300 metres of Brookfield School, and the proposed new store had three early childhood centres in very close proximity.

The school filed a petition opposing the shop as part of the publically notified consultation process back in August.

Ngaere says the community backed the school’s stance, with lots of people signing the petition and making their own submissions.

“We have a very tight community. We support each other.”

“We don’t support nor condemn applications like that,” says Bruce.

“It’s really up to the people living in that area to make those decisions for themselves.

“It seems that in this case, another liquor outlet was not wanted by the community and the application was subsequently withdrawn.

“It’s a good outcome for that community.”

A Tauranga City Council spokesperson has confirmed the applicant, Makita Holdings Limited, who recently applied for an off licence at 2 Jude Place, Brookfield has decided to withdraw their application.

Council team leader of environmental health and licensing Sam Kemp says a significant number of public objections to the application were received.

The proposed store hours were from 9am-10pm, seven days a week, and if it had gone ahead it would have been just across the road from the new site for Brookfield School - around 500m from the current school on Millers Road.

In 2019 the Ministry of Education announced a new school would be built because of the burgeoning roll, and plans have recently been finalised. A start date for the build is yet to be confirmed.