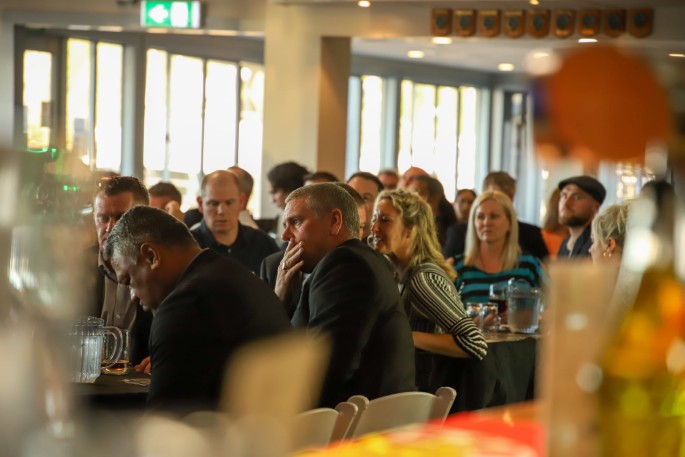 Black Marlin, Swordfish and Yellowfin Tuna hung from the walls of the Whakatane Fishing Club as hundreds arrived to celebrate the 2021 annual Bay of Plenty Rugby Awards.

With Whale Island and the Pacific Ocean serving as the backdrop for a night of celebration and commemoration, a packed out venue of stylishly dressed volunteers, sponsors, and high-performance athletes mixed and mingled before taking their seats.

Bay of Plenty based company Local Gecko Productions were on standby with livestream cameras as proceedings began. A stirring karakia from former Bay of Plenty Steamers coach Matt Te Pou set the evening into motion. The night was officially underway.

"Trailblazer" may have been the euphemism attributed by many to describe the recipients and winners of the community awards, with none more deserving than Rotoiti Head Coach Victoria Grant, who won the Farmlands Club Coach of the Year Award.

Victoria's achievement can hardly be understated, becoming the first female coach to ever manage a men's premier rugby side in the Bay of Plenty.

"I want to thank the Rotoiti Premier Men for having my back and trusting in me this year. That was massive for me," says Victoria.

Other community winners of note were the FMG Rugby Good Sort recipient Mitchell Brown from Greerton Marist, as well as Trident High School who won back-to-back awards, including the Toi Ohomai Secondary School Programme and Coach of the Year Awards.

The high-performance segment of the evening was dominated by three names who stole the show. Justin Sangster from the Bay of Plenty Steamers cashed in on his remarkable debut professional season by winning three separate awards, including the First Mortgage Trust Steamers Forward of the Year, The Steamers Player's Player of the Year, and the Whakatane Council Sports Person of the Year awards.

"It's an honour to receive this award. This year has come as a bit of a surprise, and it has all come very quickly for me," says Justin.

Kendra Reynolds took out two awards, winning the DVS Volcanix Player of the Year Award and the Zespri Supreme Award.

The Zespri Supreme Award is the highest honour one can receive. It recognises the greatest sports achievement of the year, chosen from the pool of all award winners from the evening.

Kendra was recognised for her incredible season with the Bay of Plenty Volcanix, leading her team as Co-Captain which has culminated in her selection into the Black Ferns squad for their End of Year Tour. Kendra tuned into the livestream direct from the U.K. where she is currently with the Black Ferns.

Rodney received the Lion Foundation Representative Coach of the Year Award in his last year with the Bay as he moves into a new role in the women's rugby space with New Zealand Rugby.

"His contribution to rugby can hardly be understated, and we wish him all the best on his new rugby endeavour.

"A major thankyou goes out to everyone who made this event possible with a special thankyou to our major sponsor Zespri," says a Bay of Plenty Rugby spokesperson. "Without your support, this wonderful celebration of rugby achievement in the Bay of Plenty would not be possible."

One Foundation U16 Girls Player of the Year : Harata Heyblom

DVS Volcanix Back of the Year: Kanyon Paul

First Mortgage Trust Steamers Back of the Year: Leroy Carter