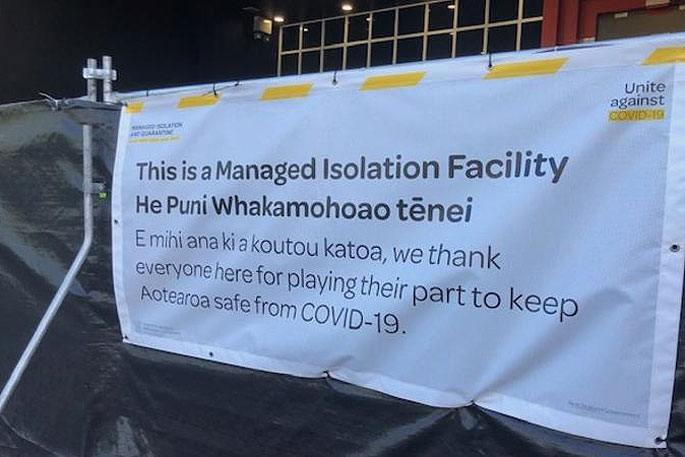 A Covid-19 case fled a Hamilton MIQ facility this morning by removing a section of fencing and jumping into a waiting car, but were stopped by police a few minutes later.

It was one of two attempts to flee a MIQ facility in the past day, with another Covid-19 case running away from the entrance to the Holiday Inn at Auckland Airport last night. They were also caught within five minutes.

In a statement, Joint Head of MIQ Brigadier Rose King says every single event like this is "extremely disappointing".

In the Hamilton incident, a person with Covid-19 fled from the Amohia Community Isolation Quarantine facility in Hamilton by removing a section of perimeter fencing at about 11.45am today.

King says the person was observed by MIQ Security during this time, and when they absconded in a waiting car, they were soon apprehended a short distance away by police and are now in custody.

The person arrived at the facility on 27 October and were on day eight of their stay.

The Amohia is being used as a quarantine facility for positive Waikato cases. It has 110 rooms and there are currently 17 community cases there, occupying 16 rooms.

In the second incident in Auckland last night, a positive community case was arriving by shuttle at the Holiday Inn Managed Isolation facility at about 5pm when they fled on foot out of the open gate.

King says the fleeing person was observed by police and MIQ security the entire time and did not come in contact with anyone.

They were soon apprehended by police about 100 metres and were immediately returned to the facility.

A security guard has now been stationed outside their room.

"People don't come into our facilities because they've broken the law, they come in because unfortunately they are community cases that have tested positive.

"It is hard to keep people in a facility if they are determined to leave. MIQ staff work really hard to ensure the safety and comfort of all members of our community currently staying at our facilities.

“Most recent absconders were caught very quickly thanks to our staff and our security measures."

King says the overwhelming majority going through the MIQ system were doing their part to keep New Zealand safe, but deliberate breaches like this "can put the wider community at risk".

There have now been 18 absconding attempts involving 24 people, with more than 186,000 people passing through managed isolation and quarantine.

Since the pandemic started only 0.6% of returnees have been positive. And that number is falling each day as more people are vaccinated. Added to that there are now rapid PCR tests, not just antigen tests, available that give results in 20 minutes. Added to that Covid will be endemic in New Zealand. These miserable facilities, that are nothing more than prisons, are simply not required now for the vast majority of returnees. There is no wonder people are leaving in droves and they cannot staff hospitals. New Zealanders will get what they deserve for being such gullible selfish idiots.