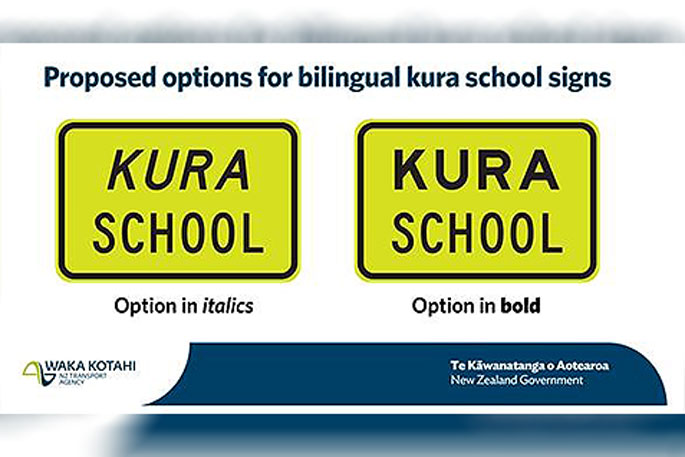 The proposal will see the word kura in bold or italic font positioned above the word school to differentiate te reo Māori and English.

“The Government wants to see te reo Māori seen, spoken and heard wherever possible, to continue the revitalisation of the language. We are seizing the opportunity to introduce bilingual school signs in advance of other bilingual traffic signs to align with expected changes to speed limits around schools from next year,” Mr Patena says.

The new Land Transport Rule: Setting of Speed Limits 2021, expected to be implemented in 2022, will mandate road controlling authorities to set slower speed limits outside schools to create a safer travel environment for whānau and tamariki. Forty percent of school speed limit changes will need to be completed by 2024 and the remainder completed by 2030.

Bilingual signs have been used on the network for some time, but the proposed rule change will help with more consistent and safe use across Aotearoa New Zealand.

“Aligning the timing of the introduction of kura school signs with the proposed Speed Rule changes helps to maximise the existing funding and implementation resources set aside by Road Controlling Authorities for new speed limit signs.”

A long-term programme of work led by Waka Kotahi, with support from Te Manatū Waka Ministry of Transport and input from Te Taura Whiri i te Reo Māori and Te Mātāwai, is developing a phased approach to the introduction of bilingual traffic signs.

The development of a selection criteria will prioritise which signs will be introduced first.

“Waka Kotahi will continue to investigate other bilingual or te reo Māori only traffic signs which can be enabled across the motu.”

Further details on the consultation, including how to make a submission, can be found at https://nzta.govt.nz/about-us/consultations/

Research on international bilingual signage is available at: https://www.nzta.govt.nz/resources/research/notes/005

My Thoughts Too Professor

That was the first thing I thought too. I’m sitting on the fence whether we need to have this. Perhaps the money would be better spent educating bus drivers on how to close the sign when the bus is parked and not in use and money better spent enforcing the speed limit passing a school bus that has stopped for kids on EITHER side of the road.

Why does the Maori word always go ahead of the English word? Shouldn’t the most common language lead, followed by a translation for those who don’t understand English?

When around 15% of the populace is Maori, why is their language being given prominence over the language spoken, in the main, by the other 85%? And what’s the bet that the wokesters will want to cancel any hint of English within 5 years?