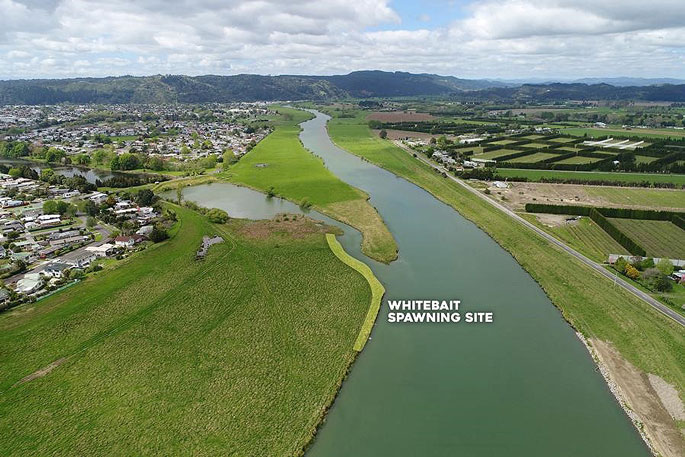 The shaded area on this photo indicates where the riverbank will be gently sloped to enable inanga spawning to occur. Photo: BOP Regional Council.

A new trial on the Whakatāne River may soon see a better future for inanga (whitebait) populations.

Toi Moana Bay of Plenty Regional Council is trialing creating inanga spawning habitat directly upstream from the ponds it has already constructed as a haven for young inanga, tuna and other native fish to keep them safe from predators.

Rivers and Drainage Operations Manager Bruce Crabbe says spawning opportunities for inanga on the Whakatāne River are currently limited and while the haven is protecting young whitebait through to adulthood, there is limited habitat for those inanga to then lay their own eggs and grow the population.

Inanga spawn in the grass alongside a river during a spring tide. A spring tide is a higher than usual tide and occurs once a month when the sun and moon align.

The eggs remain on the riverbank grass for a month until the next spring tide. The young inanga then drift out to sea to develop into juveniles and return to river to live through to adulthood.

“Over the years, as flood events occur, the general level of the river banks increase as sediment is deposited. As a result, the river banks are often too high to be covered by the spring tide so they aren’t available for whitebait to spawn.

“This severely limits the locations inanga can successfully spawn. As part of this trial, we will be gently sloping a section of the riverbank near the Awatapu Lagoon outlet which will open up more suitable spawning locations for the inanga.”

The work will be completed in time for the inanga spawning season which takes place from late summer to early autumn.

“We will be monitoring the site and if it is successful, we will create more inanga spawning habitat in the future,” says Crabbe.

Whitebait are the juveniles of six species of fish. Of the six, four are classed as threatened or declining by the Department of Conservation.