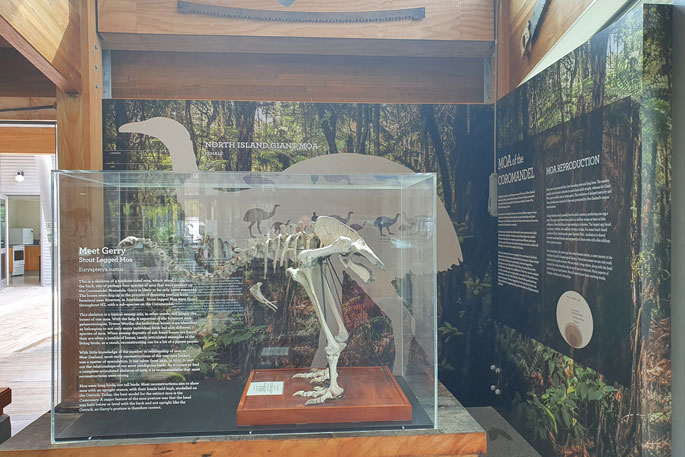 A complete moa skeleton is now on display at the Department of Conservation’s Kauaeranga Visitor Centre.

On long-term loan from local conservationist Doug Ashby – well-known as “The Lizard Man” through his voluntary work educating on New Zealand’s reptiles – the skeleton has been compiled from the bones of several specimens uncovered in Riverton, Southland.

The bones comprising the full moa skeleton were discovered when land near Riverton was drained for pasture.

The skeleton is of a Stout legged moa (Eurypateryx curtus) and is estimated to be 1000 years old. Stout legged moa were a medium-sized species, standing about 1.5m tall, and were found in Coromandel.

The Stout legged moa lived in shrubland, their beak shape and structure suggesting they preferred a diet of soft plant material and fruit.

Kauaeranga Visitor Centre Supervisor Wendy Hillerich says the moa skeleton is an exciting and interesting addition to the visitor centre – and the first time it has had a moa skeleton on display.

“We’ve been working with Doug on this display for about 18 months,” she says.

“Doug’s a familiar face at the visitor centre so we’re delighted to be able to give this specimen a semi-permanent home.”

The moa skeleton is encased in a glass cabinet, alongside a related display showing the various sizes of eggs from the different moa species.

Display panels give a range of information about the species of moa in New Zealand.

One interesting feature of the skeleton is its posture, with the moa’s head at about the same level as its body.

“Many depictions of moa show the birds with their heads held quite high – but the advice we have is they tended to keep their heads down, so that’s how this specimen has been presented.

When swamp deposits of sub fossil bones are found, they are often a jumble of bones, not articulated examples of the living birds.

As a result, reconstructing can be a bit of a jigsaw puzzle.

Many early examples of moa skeletons were not accurate.

Doug Ashby came into possession of the skeleton in 2005 after a trip to Southland.

The skeleton was owned by the proprietor of a local motorcamp and when Doug Ashby expressed an interest in the skeleton, the then-owner offered it to him.

The Kauaeranga Visitor Centre is a key asset for DOC in the Coromandel, acting as a gateway for the district and providing educational and camping experiences for visitors.

Its opening hours can be found here, on the DOC website.