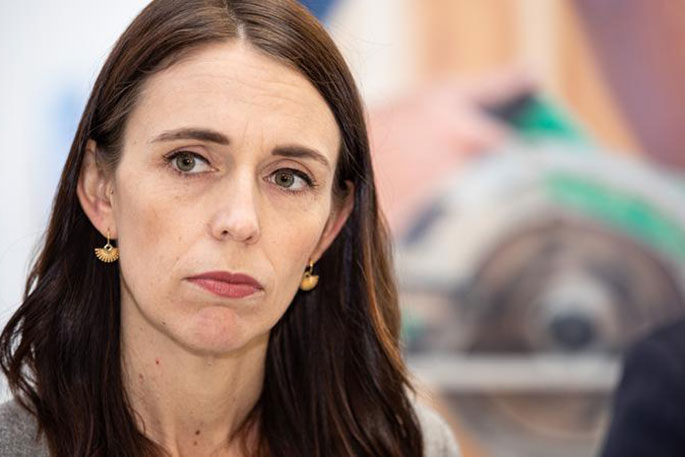 Prime Minister Jacinda Ardern says the government wants to lift vaccination rates and wants to remove anything that is a barrier to getting as many people vaccinated as quickly as possible.

Ardern and Māori-Crown relations Minister Kelvin Davis are in Northland viewing the rollout of vaccinations.

Ardern spoke to media this afternoon until she was continuously interrupted by a person in the crowd. She then decided to shut down and move the conference.

In the conference, Ardern says the low vaccination rates in Northland are not a failure of the government.

She says the the government wants to lift vaccination rates, and wants to remove anything that is a barrier to getting as many people vaccinated as quickly as possible.

"I asked one provider, what are you hearing when you're out vaccinating ... they described it as Covid not necessarily feeling close enough to the community yet, that even when there have been cases in Northland it might be seen as a valley over, not at the front door.

"We will do everything we can to keep it isolated, but we need everyone to be vaccinated."

She says decisions were made based on public health advice.

The Prime Minister would rather people were getting vaccinated regardless of alert level, because it was the right thing to do, she says.

Asked about the ruling ordering the Ministry of Health to reconsider its stance of withholding Māori vaccination data on the basis of privacy, Ardern says it was an issue about what data had been available or able to be shared, and she would allow the health team to work through that.

She says the number of people who "would be described as ... anti-vaccination" is relatively small in New Zealand and she absolutely believes the 90 per cent double vaccinated rate the government is aiming for can be achieved.

She says young people in particular can be exposed to misinformation online, so there is more work ahead.

Ardern says despite best efforts, cases have come out of Auckland "and so we do need people to be vaccinated.”

Minister Davis says Te Tai Tokerau has not been forgotten.

"I have weekly meetings with all iwi leaders, so there's a lot of work going into protecting our people, and as we've said there's extra $4 million going into the north today. We're doing everything we can to make sure that our people are protected and people get vaccinated."

Ardern says the approach from the government has been to ask Māori providers to focus on older kaumātua and kuia, and to take a whānau-based approach.

When asked about protestors, Davis says "That's the first protest I've seen, there were two people.

“Obviously they think they're smarter than the virus... I don't think it helps what we're trying to do here, to protect whānau, to protect whakapapa. And to have people think that what's going on is not reality?

“I think that they're just living in a strange world. Our focus is on making sure that as many people as possible get vaccinated to protect their whānau, to protect their whakapapa, and that sort of stuff just doesn't help at all."

Ardern says misinformation exists everywhere but it is a minority voice.

Northland is one of the lowest-performing regions for vaccinations, with just 64 per cent of the region fully vaccinated - second-last, only ahead of Tairāwhiti.

It is also the region that needs the largest number of first doses to reach 90 per cent of the eligible population, with more than 17,000 doses required to reach that milestone.

The government's proposed traffic light system would see restrictions across New Zealand reduced, and lockdowns ended, once every DHB in the country reaches 90 per cent double dosed.

Northland also has a high percentage Māori population. Māori have accounted for about 40 to 50 per cent of cases in the Delta outbreak in recent weeks, and have lower vaccination rates than the rest of the population.

The government this morning announced the first round of funding for initiatives to boost Māori vaccination rates around the country, allocating $23.3 million from the $120m fund announced just over a week ago.

You have read from some ridiculous made up site not official govt one. I looked at deaths involving covid by vaccination status which links with www. one.govt.uk. A long itemised scientific study of stats facts and figures graphs that is quite long and very thorough regarding vaccinated , one or two jabs , age sex, immune compromised etc . You will need to read a lot if you want truth although I suspect you don’t. Table one notes 5. A sentence "640 deaths involving covid 19 in people who had received both vaccine doses is 1.2 percent of all deaths of covid 19. A press headline from UK " COVID death risk 32 times higher for unvaccinated "

Have you actually looked @ Kancho

@ Kancho you clearly have NOT looked at the UK data at all. Go to the UK Public health site briefing 23 SARS-CoV2 variants of concern. All deaths 2542 with 1779 fully vaccinated. That equates to 70%. Its in the tables if you actually took the time to look.

What total tosh on UK figures . The facts are that whilst vaccinated people can get Covid 19 hospitalisation are lower if vaccinated. The figure of vaccinated deaths in the UK is 1.2 percent and that is because some very old or already compromised health who may have died anyway. Disinformation and malicious information has not place on here or anywhere. Easy to check so stop the lies to frighten people.

Was there anything that couldn’t have been disseminated with a press release from Wellington...? The heckler appeared to be trying to throw stuff at a wall and hoping that something would stick and our esteemed leader, once again, couldn’t handle criticism and runs for cover with her fawning entourage. Disgraceful the way we’re being led around by a populist instead of a politician.

I think although a Labour voter but now very much an ex supporter I would be hard pressed to not heckle to if I were in the crowd. So much non delivery , tardiness and so much spin and self congratulations would be hard not to . So much to criticize so much squandered time.

She’s always reading what someone else has written. A proper leader and orator would have shut down the heckler. She can’t. Another example of her way or the highway. Can’t wait for the world to reopen and leave this country I was born in. It’s not worth staying with this circus in control.

Jacinda cant handle the hecklers when Bloomfield & Hipkins are not there to hold her hand!

Its a valid question

Its a shame the media doesnt ask why 70% of deaths in UK are fully vaccinated. He has a valid question about the efficacy of a vaccine that does not stop you catching the virus or spreading it if fully vaccinated. Yet the two class system is promoted without question by the media