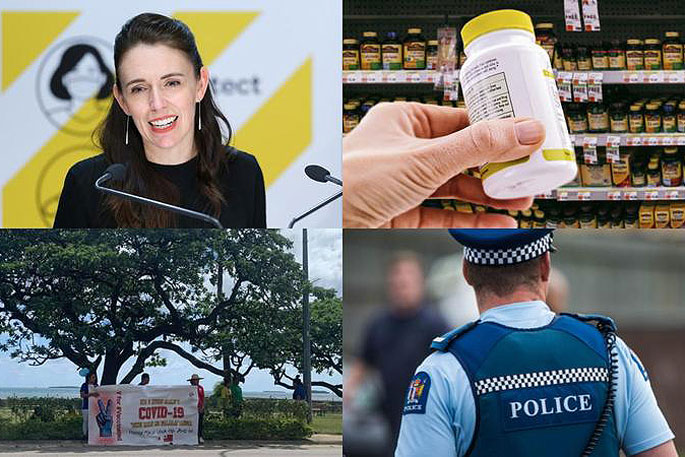 Cabinet decided to ease restrictions for some, the prime minister says cases may peak this month at 200 a day, there's safety concerns as supplement sales soar and Tonga will enter a snap lockdown at midnight.

Here's an overview of the day's Covid-19 news.

Restrictions are set to ease slightly in both Waikato and Tāmaki Makaurau, albeit at different times.

The prime minister announced at Monday's post-Cabinet briefing that Waikato would move down to alert level 3 step 2 from midnight Tuesday.

Meanwhile Cabinet has decided in principle to move Tāmaki Makaurau to alert level 3 step 2 next Tuesday at 11.59pm.

Hipkins told Checkpoint the in-principle decision is based on public health advice.

Covid-19 cases may peak this month at 200 a day according to modelling that takes vaccination rates into account, Prime Minister Jacinda Ardern says.

The government modelling suggested there could be 1400 Covid-19 cases reported a week by the end of the month.

This would result in 150 new hospitalisations a week, with 11 of those patients requiring intensive care.

The modelling was based on a median scenario with a transmission rate of between 1.2 and 1.3.

Director-General of Health Ashley Bloomfield says ICUs would not be overwhelmed with those numbers.

Two days ago the Kingdom of Tonga recorded its first case of Covid-19, now at midnight the main island Tongatapu will go into lockdown.

The lockdown will stay in place until next Sunday.

The positive case arrived in Nuku'alofa on a repatriation flight from Christchurch and while he is asymptomatic, he is being cared for alone in a special quarantine facility in Mu'a.

Tonga's Ministry of Health chief executive Dr Siale Akau'ola says the remaining 214 passengers were in MIQ at the Tanoa Hotel while about 80 frontline workers who met the flight are also in MIQ at the Kupesi Hotel.

"In terms of gatherings this is the most significant part of the lockdown. No schools, all schools are closed, no church gathering, no kava club, no entertainment or any kind of gathering," RNZ Pacific's correspondent in Tonga, Kalafi Moala, says.

Sales of natural health supplements have risen since Covid-19 arrived in New Zealand, but some products can have adverse effects such as anaphylaxis or death.

Supplements, however, are largely unregulated in New Zealand, with the Ministry of Health saying the pandemic has delayed new legislation.

Ten years of Medsafe data shows two people died from complementary and alternative medicine, or CAM, and that 30 per cent of suspected reactions are life-threatening or cause disability.

About 80 per cent of New Zealanders have taken natural health supplements, and Nielsen data shows sales in supermarkets alone rose by nearly fourteen percent in the past two years, reflecting worldwide trends.

Two positive community cases fled the Jet Park Managed Quarantine Facility on Sunday, in the second breach of MIQ security at the weekend.

Police say one of the people has been found and returned to MIQ. He was found during a vehicle stop in west Auckland.

The whereabouts of a woman who also skipped MIQ on Saturday is known to police but public health officials says she does not need to return.

Police say a decision around any charges will be made soon.

Meanwhile, police say a 36-year-old man had been arrested and charged with Failing to Comply with Order (Covid-19) in relation to attending a gathering at the Auckland Domain and subsequent march through Newmarket on Saturday.

A Covid-19 treatment the government is purchasing can help reduce the number of people dying from the virus, says an expert from the University of Otago.

Pharmac revealed on Sunday it is set to subsidise Ronapreve, also known as Regeneron or REGEN-COV, which is used for people in danger of becoming severely unwell.

It is expected to be in the country by Christmas.

University of Otago infectious diseases professor Kurt Krause told Morning Report it is a highly effective way of dealing with early infection and in preventing infection.

Medsafe is also considering molnupiravir for the treatment of Covid-19.

Professor Hendy, the expert modeller, thinks we could see cases go above 300 a day in “this outbreak”. And that in will continue well into 2022 and we might struggle to get numbers down again as contact tracing struggles. Errr,…yes Prof. It’s called being ‘endemic’. Get used to it. Sadly, this bloke is supposed to be educated yet he continues to talk about “this outbreak” and controlling it. Wake up man. It’s here, it’s endemic. Contact tracing is pointless. It will bubble along forever and we will be fine. Too many control freaks still chasing ghosts and trying to be clever at the expense of businesses and quality of life.