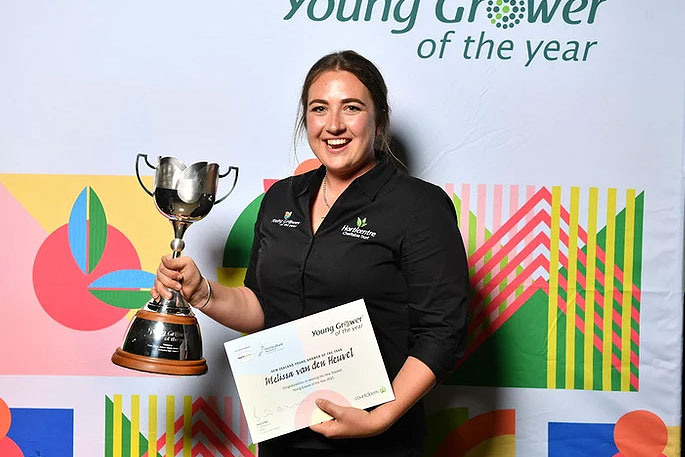 Mel emerged the winner of her sector after a two-day competition held late last month. The competition involved testing skills like tractor driving, pest identification and bookwork, as well as the presentation of an innovative idea, and delivery of speech.

“Winning was a shock, a bit overwhelming,” says Mel, who says she was up against a strong bunch of contestants.

She says she’s proud to be in such a supportive industry and is passionate about her work.

“What we produce is very top notch,” says this young woman whose working life has been avocado focused.

Armed with a Bachelor of Science degree from Waikato University, Mel went straight to NZ Avocado, spending three years there initially as a graduate and then moving into an industry system’s associate role. Her post-harvest focused job involved aspects such as quality standards and trials and pest monitoring protocol. Mel moved to Katikati-based Apata just over a year ago and is an avocado grower services representative there.

Rotorua-born Mel, lives in Matamata, and commutes over the Kaimai Ranges to work … after starting the day with an avocado-focused breakfast.

“You can’t go wrong with avocado on toast, it’s stock standard. Depending on the mood, I sometimes add some avocado oil (lime flavoured) and chilli sauce, but usually I just whip some on toast and off I go,” Mel laughs.

Young Horticulturist competition chairperson Hamish Gates says the competition offers a springboard from which many of its contestants go on to ensure NZ’s horticultural industry remains innovative and inspirational in a global context.

The competition is an important event for the primary sectors of NZ, he says, and couldn’t occur without the support of official partners, supporters, and friends of the competition.

Returning as the official 2021 partners are Countdown, Fruitfed and T&G Fresh.

T&G Global Chief Executive, Gareth Edgecombe says horticulture is an exciting and fulfilling career option for young people and T&G is proud to support the great talent presented at the Young Horticulturist Competition.

“We’re proud to help recognise the future leaders of our industry through the Young Horticulturist Competition. Every year the competition presents many driven and enthusiastic young people ready to lead Aotearoa’s exciting horticulture industry forward, which is great to see.”

This 2021 competition final was to have been held late this year but has been delayed until mid-February due to Covid-related restrictions.