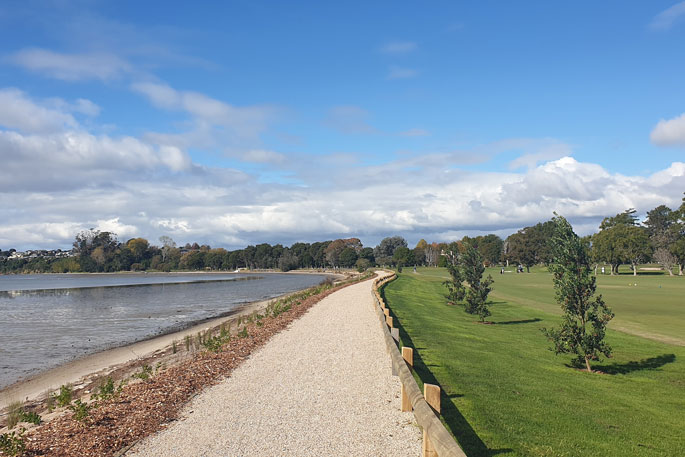 The Ōmokoroa Golf Club foreshore protection and community walkway is now open, after three years in the making.

Key supporters of the project gathered on Sunday to celebrate the grand opening.

The ceremony saw Western Bay of Plenty Mayor Garry Webber speak of the history of the project and TECT Trustee Peter Blackwell mention TECT’s support, with the local trust contributing $200,000.

The project started in 2019 with the Ōmokoroa Golf Club wishing to undertake foreshore protection works and Western Bay of Plenty District Council wanting to formalise and form the public walkway, cycleway and access to the foreshore adjacent to the golf course land.

Prior to the project’s completion, the public had the right to walk the foreshore along the esplanade reserve, with the club’s frontage linking the two Ōmokoroa Peninsular walkways; however, there was no formal path.

Users generally walked the beach at low tides but walked or cycled the side of the golf course fairways during high tide.

Foreshore committee member David Hughes says the project was conceived as land retention along the foreshore due to years of erosion had become critical to the golf course.

“The golf club had been concerned for years about the degree of foreshore erosion taking place, particularly in areas that directly affected play, namely tees and greens.

“Over the years, there had been a number of attempts to mitigate this by use of planting, ad-hoc physical barriers – most of which had slowed the progress but not solved the issue. The worst affected area was the 16th tee that had been progressively eroded to the extent that the tee ground had started to fall away.

“Teeing areas were being lost to the high tides when combined with windy conditions and storms and community user access to the recreational reserve that bounds the course was being compromised.”

Hughes says a storm event in January 2018 brought in sharp focus the need to act formally to protect the foreshore from further erosion and place a bund structure to protect the most vulnerable areas.

“Discussions were held with Bay of Plenty Regional Council and Western Bay of Plenty District Council regarding what was possible led by past golf board chair Fintan Downes.

“The Council wanted to protect the Precious Reserve and address the damp ground conditions to provide the community with a more enjoyable experience, and from this, the idea of a joint walkway/cycleway/protection bund was formed.

”Local firm Tiaki Engineering Consultants Ltd were engaged to provide the detailed design and partnership with the local hapū Pirirākau has provided a well-balanced team combined with Council management of the project.”

The foreshore project was completed in two stages, with a third wetland boardwalk stage under construction now.

Stage One comprised of work to the Southern end of the foreshore alongside Precious Reserve and was funded by Ōmokoroa Golf Club, the local Community Board and Western Bay of Plenty District Council. This was completed in September 2020.

Stage Two of the project, which started in January of this year, built a shared path on the top of a bund bordering the golf course.

The bund and path link to a boardwalk and connect the Precious Reserve and Kayelene Place. This was funded by TECT’s grant and Western Bay of Plenty District Council’s Three Waters funding

Hughes says securing TECT funding for the Stage Two works was crucial to getting Stage Two underway and hence overall completion of the project.

“It would be fair to say had we not obtained the TECT funds, then Stage Two would have at best been delayed or quite possibly not happened at all. So, in this regard, TECT funds have been a key seed fund that we have been able to leverage off to complete the project.”

Hughes notes that the project completion has seen a huge increase in the number of community groups using the walkway and enjoying the foreshore.

“Western Bay of Plenty District Council have been very pleased with the public response to the project and its contribution to recreational activity on the peninsular.

“The golf club has achieved its aims of protecting our main areas of erosion and storm flooding and also received increased public awareness of golfing activity that possibly has had and should continue to have spin-offs in increased membership and green fee play.”

Going forward, both Hughes and Downes would like to see the Ōmokoroa Golf Club develop into a real jewel for the community, providing a top-class golfing venue and an integrated golf/social club.

“To achieve this, we need to provide further course improvements resulting in better playing conditions, and also enlarge and redevelop our clubrooms. With the very rapid recent expansion of the Ōmokoroa population, it’s fair to say we have seen an uplift in membership numbers that hasn’t been matched in our expansion in clubhouse facilities.

“Over the next few years, I think we must plan for a redeveloped clubhouse, ideally two-storey and of a high standard that brings in both golfers and community engagement with it providing a function centre, wedding venue, etcetera, in a beautiful coastal setting.”

Get the roading sorted FIRST, FOOLS.

Omokoroa seems to be getting all funding for Western Bay now, why is that??? Omokoroa is already causing havoc on the roads to Tauranga before you even get to Te Puna, yet you continue to squeeze more houses and people onto the roads, for God’s sake, get the motorway built before more housing and people, and walking tracks and cycle ways, what is wrong with your planners, are they blind or just plain dumb. Just remember, Omokoroa is not the only community in Western Bay and all that money for weekend romps is not going to stop road congestion. Omokoroa is destroyed, just like Bethlehem. Get the Motorway FIRST you idiots.