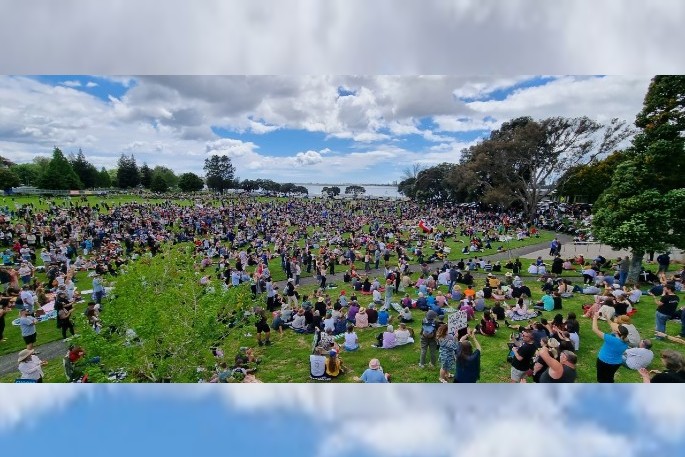 The gathering at Memorial Park on Saturday. Photo: Aaron Stuart-Menzies.

Thousands of people have gathered at Memorial Park on Saturday to make a stand about freedoms in New Zealand.

Promoted as a peaceful protest/Freedoms Picnic via social media by The Freedoms & Rights Coalition of New Zealand, the gathering which began at 11am was planned to be ‘a peaceful stand for all those concerned with the state of our nation’.

The crowd that gathered stood quietly, listening to speakers, and joining in singing together.

The event follows on the heels of a previous gathering held at Coronation Park at Mount Maunganui on Super Saturday October 16 where about 450 people attended.

Some promoted today’s gathering as a ‘Tauranga protest’ and encouraged their social media followers to ‘fight for your freedom’ by coming along to Tauranga Memorial Park.

A gypsy fair being held concurrently in another area of the park also meant that numbers of people in the park swelled further. There were hundreds at the gypsy fair, despite a sign saying only 100 were allowed to be there at one time.

James, a Tauranga resident, says the peaceful gathering at Memorial Park was “to discuss the freedoms that are rapidly being taken away from NZ citizens”.

“Amongst those freedoms is the proposed Water Reform, which is going to affect all Tauranga and Bay of Plenty ratepayers. The Government has announced that it is happening with or without local Council and ratepayer consent. Does this sound democratic to you?

“The other main reason kiwis of all backgrounds gathered was because the Government has been set on tearing us apart for too long,” says James.

“The recent announcement by the Prime Minister to divide the population into two classes is nothing if not medical apartheid. Apartheid. Segregation. Two classes, those with rights and those without.”

James say this should be of deep concern for everyone, and people should reflect on these matters and ask themselves if it feels right.

“A lot of the country are very fearful right now and families are being torn apart. Is this moral, ethical, democratic?”

On Tuesday Prime Minister Jacinda Ardern announced a Covid-19 vaccination mandate for businesses in which vaccine certificates are set to be needed for entry. This includes hospitality, events, gyms and hairdressers and barbers – classed as close contact workplaces.

Workplace Relations and Safety Minister Michael Wood announced that vaccination will be required for all workers at businesses where customers need to show Covid-19 Vaccination Certificates, such as hospitality and close-contact businesses.

Overall, Wood suggests, combined with the border, healthcare and education workers already mandated, it will equate to 40 per cent of the New Zealand workforce. Non-vaccinated workers in roles requiring vaccination will be given a new four-week notice period to get vaccinated before employment can be terminated.

A Tauranga resident who works for a mental health organization says that some of her colleagues are having to leave their jobs after many years’ service, having received a ‘no jab no job’ letter from their employer this week.

“I think that many people who have been vaccinated think that those here at the park today are all anti-vax. I’m not anti-vax, I’m pro-choice. I’ve just received my second vaccination today. But we are going to lose so many top staff with years of experience working in mental health because of the mandate about vaccinations.”

Some people at the park had signs showing their stance on Covid vaccinations or told stories of family members who had experienced adverse reactions.

The New Zealand National Anthem was sung with people standing quietly across the park, some with picnic blankets, and some waving the NZ flag and other flags above them.

Words in the anthem were resonating with many - ‘in the bonds of love we meet’,  ‘hear our voices’, and ‘God defend our free land’ stirring the crowd as they joined in singing the first verse.

“We are not a team of five million anymore,” says one attendee, referring to the vaccination ‘no jab no job’ mandate. “We are two teams now.”

Despite the numbers of COVID-19 community cases rising, with the highest daily total ever recorded in NZ of 160 new community cases, and the spread now extending to Canterbury, the majority of people present were not wearing masks.

The event had been promoted as a picnic with the suggestion that people sit in small groups of under ten people and bring their picnic basket. Although some people spread out a picnic blanket the majority of people present were standing to listen to the speakers who talked of freedoms, rights and vaccination.

A haka performed at the front of the crowd towards the end of the gathering brought applause.

A Tauranga man was arrested on Thursday, and police are not ruling out further charges, in relation to the previous gathering at Coronation Park which Police state was in alleged breach of Covid-19 restrictions..

Police say a 43-year-old man was arrested and was charged with failing to comply with an order, under Covid-19 regulations.

After that event, a group of Bay of Plenty doctors made contact with SunLive, concerned with a speech made at the gathering which contained misinformation about the Covid-19 vaccination.

A post following the Memorial Park gathering on The Freedoms & Rights Coalition – Tauranga Facebook page states that there will be a convoy going to Wellington on November 9 to protest to the NZ Government. 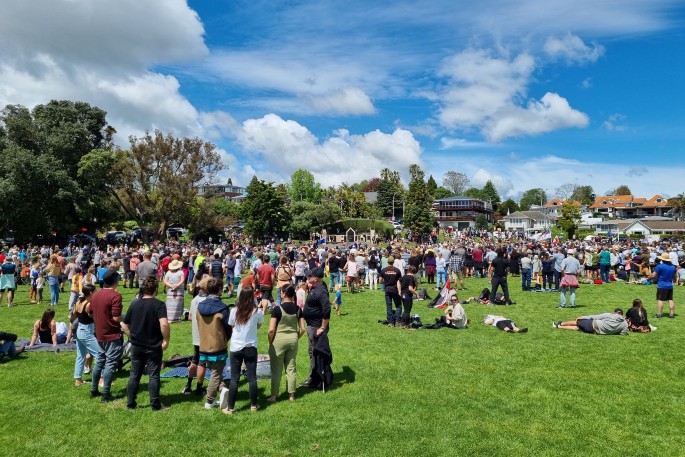 No, the weakest justification in the book is to ignore every report from almost every country in the world who have been through hell with covid and to state "not true". Then of course to bolster your statement with completely made up facts about a virus that has killed over 5 million people and to dismiss it like it is a nasty cold. I (and I fear that nobody else) can help you. I am reminded of some wise words "if you can keep your head while all those around you lose theirs, you are probably not aware of the situation" I will leave you to get back to making tin foil hats.

The weakest justification in the book is that our hospitals will be overwhelmed by unvaxxed. Not true, most ’covid’ cases are there for other reasons or precaution and hospitals were at capacity well before covid. Huge Majority of cases get better at home all on their own without treatment. If the govt really thought that they would have spent a fracture of the $62 billion covid relief money grab on a covid hospital.

Agreed, we cannot stop the eventual spread of covid in the community. We (I think) are all aware of that. Also, Covid Is indeed spread by the vaccinated as well because the vaccine does not stop them catching it; it was never meant to. What being vaccinated DOES DO though is to vastly reduce the liklihood of your hospitalisation. The most recent statistics I have seen state that 95% of current hospitalisations are among the unvaccinated - THAT IS THE POINT. If we have low enough numbers of the unvaccinated, then the health system will not be overwhelmed and then, when you are sick for whatever reason, there might just be a bed and treatment available. To all those community minded out there who have had their jabs, THANK YOU! If you are eligible to have the vaccine and have not, then kindly get on with it.

At almost 80% it is so absurd that the sheep of NZ are still bleeting about the unvaxed spreading this virus and even more ridiculous that they are blaming people for catching it ha ha as if they grabbed it and put it inside their body by choice, so bonkers!?!.. With the VAST majority of Auckland vaxxed it is pretty clear it is the vaccinated spreading it and catching it too.

Unfortunately like so many in NZ you have been had. Delta has a reproduction rate of between 5 - 10 in the wild, the flu is about 1.5. This means it’s uncontainable even if everyone is vaxed. The other important point is despite what a recent stuff article tried to infer. If you look at a recent study in the Lancet you will find that Delta is spread by the vaxed and unvaxed almost evenly. There is no reason at all to fear the unvaxed and certainly no reason to create division. It’s sadly a product of incompetence and political aspirations by the Government. Don’t let this be an excuse to lose your rights or career.

I was shocked that apparently 1000s of people are anti-vax, but reading Hmmm’s comment below it sounds like they just latch on to any lawful protest to get their numbers up. Though the BOP DHB vax numbers are very disappointing, considering how many elderly folk who live here. Must be some other sections of the community doing the foot-dragging...

organised by the selfish for the selfish. Cries of rights abuses and a blinkered anti government stance without any hint of realisation that your ’freedoms’ are being restricted by a virus, not a government. Of course, the 3 most important people in the world to each and every attendee are me, myself and I. This tip toed stance on a peak of moral high ground centered on the rights of the individual (at the expense of the wider community) is just another thinly disguised desire to defy and to break the rules. Any small act of defiance gives them a semblance of meaning in their lives I guess? If it is indeed true that "ignorance is bliss" I can only imagine how happy these people are! Yes, I have had my jabs, not just for me but for you too, you are welcome.

What a bunch of thoughtless muppets

These people following Jacindas Vax only option when there are many safe and effective options, which she has banned.

What gives them (Protestors) the right to use our fallen soldiers memorial as a platform to speak from? Our fallen soldiers died protecting our country from foreign invaders, they never put our people at risk. When all is said and done who will be on the right side of history, those who feel their rights are impinged or those who stand unified and unselfish to win the war on covid? The minority can protest until the cows come home, covid like all virus take no prisoners. We cannot ignore those who have suffered or those who have fallen from covid and like our dead soldiers we need to honour our dead.

Who is the muppet?

What exactly are they going to “destroy”? Perhaps it’s the delusional belief that we are going to “stamp it out” and get back to living in a cave.

What a bunch of thoughtless muppets. We try so hard for so long and a bunch of idiots like this could destroy it all.

Fantastic turn out from sane people of Tauranga. We were all united together.

How can I possibly attend a demonstration against the worst government that I have encountered when it’s going to be hijacked by anti-vax enthusiasts disseminating hearsay and unscientific information. Everyone has the right to refuse vaccination, but the way the virus is still rumbling along in Locked down Auckland, I don’t believe that large gatherings of supporters of the Anti-vax movement should be allowed and the promoters should expect to appear before the courts. These gatherings have the potential to cause me and many others significant harm and life threatening infection. But you have your rights of course....

been more proud to be a New Zealander after seeing this