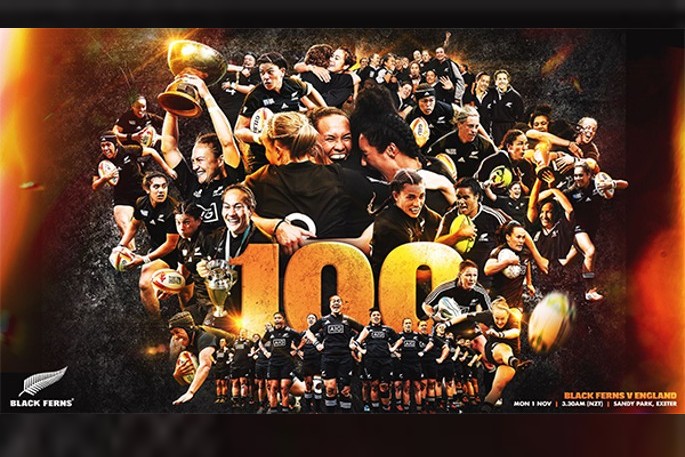 The Black Ferns are playing England at 3.30am NZT on Sunday October 31. Image: NZ Rugby.

The Black Ferns team to play England in their 100th Test this Sunday has been named and it is the first Test of the End of Year Tour with kick off at 3.30am Sunday NZ time.

With four debutants in the run on XV and five on the bench, Black Ferns Head Coach Glenn Moore has picked a side that is a true balance of youth and experience.

“We’ve had some really good talent coming through back in New Zealand and the players we have brought into our environment have really stepped up and I think those that debut this weekend will all make an impact on the game,” says Glenn.

Captain Les Elder returns for her first match in the black jersey after the birth of her first child last year and is ably supported by vice captains and veterans Kendra Cocksedge and Eloise Blackwell.

“Les is an exceptional leader and is very important to this group. She leads from the front and communicates well under pressure so it is great to have her back.”

Cocksedge and Demant combine in the halves while Waikato teammates Stacey Fluhler and Chelsea Alley pair up in the midfield. There is plenty of pace on the wings with both Renee Wickliffe and Ayesha Leti-I’iga returning after missing the 2020 Black Ferns series. Renee Holmes makes her Test debut from fullback.

There are five potential debutants off the bench with teenagers Liana Mikaele-Tu’u and Patricia Maliepo, the Waikato pair of Grace Houpapa-Barrett and Ariana Bayler and Northland Captain Krystal Murray.

Glenn says there was a true sense of excitement within the team selected to take part in the 100th Test.

“There is already a bit of spark in the group given it’s our first Test in almost two and a half years, add to that the 100th milestone and it makes for a very special occasion," says Glenn.

“There is a great rivalry between these two teams so I’m sure we can expect another great Test this weekend."

Key facts:
This will be the 28th Test between the Black Ferns and England, the Black Ferns have won 18, drawn 1 and lost eight.  It is the first Black Ferns Test since playing Australia at Eden Park in August 2019. - Les Elder captains the Black Ferns for the sixth time and halfback Kendra Cocksedge will be playing her 46th consecutive Test.