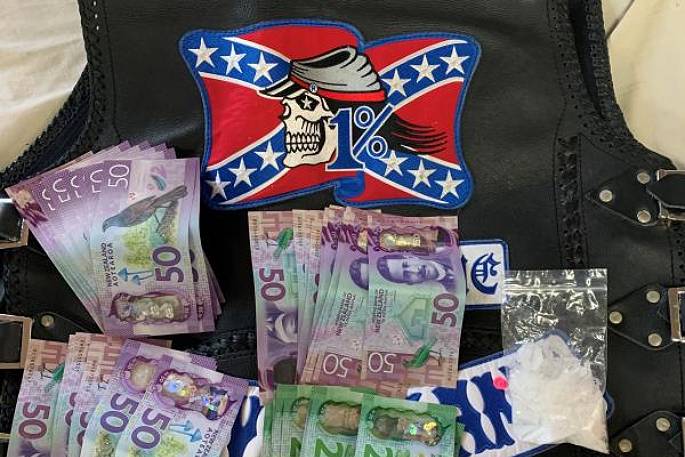 Some of the items seized during the raids. Photo: NZ Police.

Six people have been arrested in connection to search warrants targeting members of the Rebels MC gang.

Operation Ryleigh commenced in July after tensions between Rebels MC and King Cobra gangs saw a series of arsons carried out in Auckland earlier this year.

As a result of this investigation, police identified further alleged serious criminal offending, in addition to the arsons, including the possession and supply of methamphetamine and the unlawful possession of firearms and ammunition.

Six addresses in the suburbs of East Tāmaki, Mangere, Clendon Park, Papakura and Manurewa were subject to search warrants today and as a result six males were arrested and charged today.

Detective Inspector Aaron Pascoe says they cannot rule out the possibility of further charges being laid. All six are expected to appear in Counties Manukau District Court today.

Aaron says while the investigations into the series of arsons remains ongoing, today’s arrests show an ongoing commitment to stamping out criminal offending by organised crime groups and that police will ensure they are held accountable for the harm they continue to cause throughout our communities:

“Lives and families are destroyed by methamphetamine, and gangs are at the centre of that destruction.

“Police and our partners see the hurt methamphetamine causes to individuals on a daily basis. All the gangs are interested in are the profits so they can lead an outwardly lavish style, they have no interest in the damage left behind by this drug they continue to peddle.”

Over the course of this investigation, firearms, ammunition and methamphetamine has been seized by Police.

As these matters are before the Courts, we are unable to comment further.

Another awesome job by our boys in blue . . . and mufti