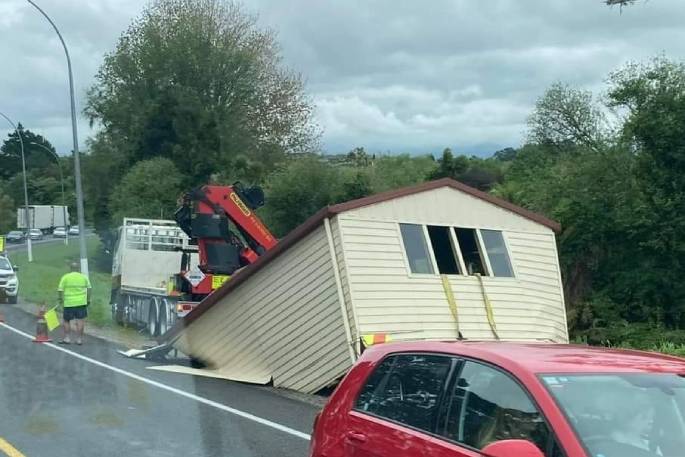 Motorists in Tauranga have come across an unusual blockage today with a large shed blocking the road on State Highway 29A.

A caller to the 0800 SUNLIVE number says that traffic is backed up between the Oropi Road and Poike roundabouts.

“There is a big delay here,” he says.

“It’s a garage that has fallen off the back of a truck by the looks of it.” 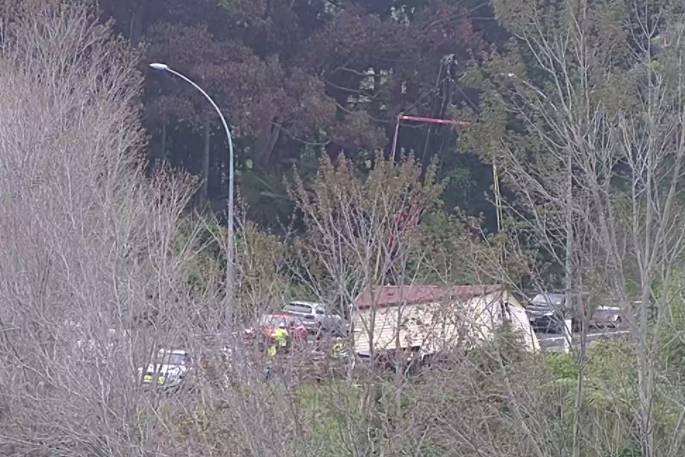 The shed reportedly fell off the back of a trailer attached to a ute.

A police spokesperson says they received a report shortly before 4pm regarding a structure blocking the highway.

"We had a report that a shed/portable cabin had fallen off a trailer, causing a large backlog of traffic."

Another caller says a crane is on site helping with the clear-up. 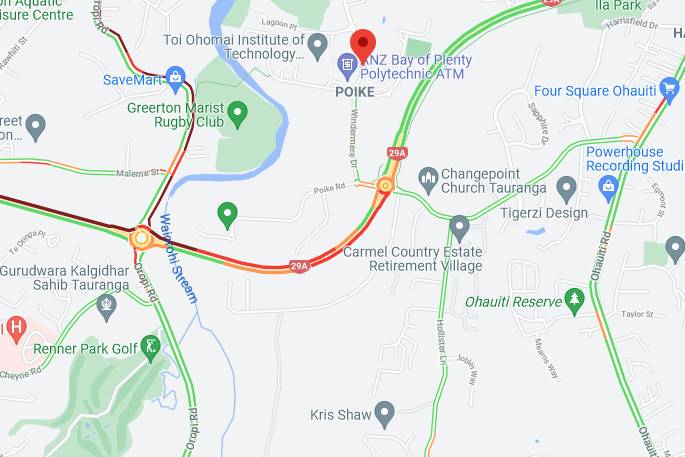 The structure was lost between the Oropi and Poike roundabouts. Google Maps.

The crane owner tells SunLive that they are working hard to clear the structure from the side of the road, but admits it is turning into a "fairly big job" and could take another hour or so to clear.

They are having to cut away the walls in order to move it.

Another eyewitness says that the road is not blocked. However, traffic is being asked to slow when passing the incident and this is causing significant delays across Tauranga, with reports of heavier than usual traffic at Barkes Corner and Tauriko Crossing.

Roadworks on Cameron Road, at the corner of Elizabeth Street, are potentially a factor in the traffic build-up.

At the scene? Phone 0800 SUNLIVE or email photos to newsroom@thesun.co.nz.

I can just picture it. You put it on and it seemed to balance ok. You put a few straps on nice and tight. You gave it a wee shake with your hands, nodded and said, “yeah, seems all good, she’ll be right”. Jumped in yer Ute and off you went, completely ignoring the laws of physics, not to mention the laws of the road. Stick to circus and keep off the road.

Sadly of course there are often no alternatives one has to drive. Poor tradespeople and elderly . For me to go to the hospital required bus changes weather permitting and a lot of time. Then shopping only recourse is a car. A lot of businesses on Cameron to get access to. I had a medical appointment in town and a bus not possible . Then decided to pick up shopping on my way home. Big problem stuck in traffic for over an hour increasing car with thousands of others engines idling.

We'll be waiting a long time

The road network will NEVER be fixed - it’s all part of their plan. The idea is to make driving so intolerable, people will choose to not drive at all. These people are zealots, they work in echo chambers where everyone is of the same mindset. Get used to it - this is our future.

I agree. My dear Wife and I went from the hospital to Barkes Cnr (on our way to Tauriko) and it took 50 minutes. Absolutely ludicrous. The shed was not even on the road or blocking a lane as such. A big Mainfreight truck drove round the Barkes Cnr roundabout and due to inattention totally blocked the intersection. People were NOT happy at all. I’m sure he got the hint. 3 minutes sitting there adds massively to the back log. TCC have really gotta sort their crap out before we reach a point of no return.

28 min elizabeth st to 15th ave another tcc stuff up

On the side of the road

Leave it there until after rush hour. It’s not blocking the road.

This will be common with Cameron road restrictions. Eleventh Ave to Barkes corner one hours 15 minutes ! Could walk faster