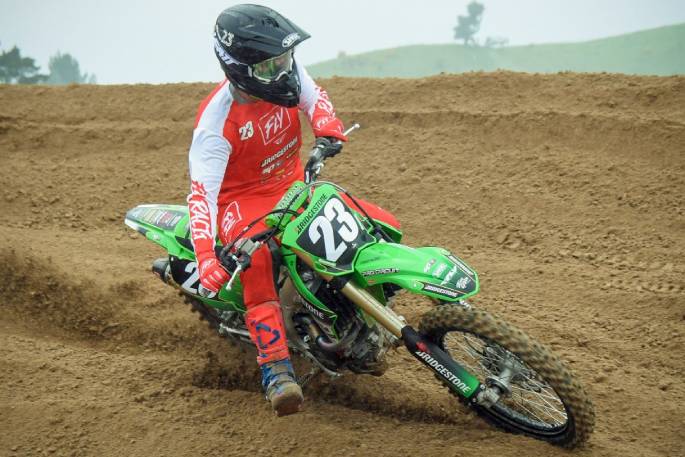 The 2021-22 motocross season could not have kicked off any better for Kawasaki racer Josiah Natzke.

The 22-year-old from Mount Maunganui picked up both team and individual wins over the Labour weekend.

He first helped his six-rider Team Green squad to overall victory at Friday's annual Battle Of The Teams motocross in Taupo. Then, he he lined up again two days later to ride as an individual and dominate the talent-laden MX2 (250cc) class at the big annual MX Fest event that was also staged at the Digger McEwen Motorcycle Park on the outskirts of Taupo.

With the Covid-19 pandemic imposing chaos on many of New Zealand's major sporting activities at present, and with so many of them actually postponed or abandoned completely, it was remarkable in itself that the three-day festival of motocross was able to be staged at all.

Natzke and his Bridgestone Kawasaki Racing Team certainly made the most of the opportunity that was presented by the proactive and forward-thinking Taupo Motorcycle Club. The extravaganza heralds the start to the 2021-22 motocross season over three days of Labour Weekend.

Friday's stand-alone Battle Of The Teams fundraiser event and the MX Fest event that followed – juniors racing on Saturday and seniors on Sunday – was a rare gem for the motorcycling community that had been forced to stand by due to Covid restrictions and there are now fingers crossed that the season can continue in one form or another.

Natzke took his Kawasaki KX250F four-stroke bike to win all three of his MX2 class races on Sunday, each time heading off challenges from Tauranga's Brodie Connolly, the rising star who won the 125cc class and the under-19 title in the nationals last season but who has since jumped up to race the more powerful 250cc competition.

Third best in this class on Sunday was Southland racer Jack Treloar, the 18-year-old apprentice builder from Otautau, near Invercargill, rewarded for his long journey with a truly solid podium performance.

Natzke's unbeaten run will surely have rung a few alarm bells for his MX2 class rivals ahead of the run of summer events that are scheduled, but not yet confirmed, for December and then on into the New Year.

"It was a great way to start the season,” says Natzke.

“I haven't done a lot of preparation ... just a little bit of riding and fitness, but nothing crazy.

"It's a shame (Oparau's national MX2 No.2) James Scott wasn't able to be here because he would have spiced things up a bit more. Brodie (Connolly) rode great today.

"This is a good starting point for me this early in the season. I was peaking more at this time last year, but it's just good to have a good day on the bike. I've got a lot of work to do yet before I'm ready for the nationals.

"The Kawasaki was awesome. It's a stock bike with an aftermarket pipe on it and that's all."