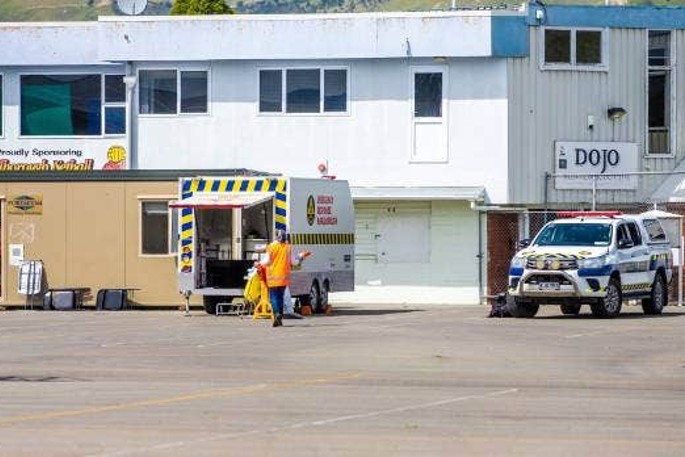 A testing centre was set up in Blenheim after the first community case in nearly a year. Photo: Brya Ingram/Stuff

There are calls for tougher measures to limit the transmission of Covid-19 between the North and South Islands, after Te Waipounamu recorded its first community case of 2021 on Saturday.

The Ministry of Health says the individual flew from Rotorua and arrived in Blenheim on October 21.

He sought a test upon arrival after developing a sore throat. The positive case is likely linked to the Te Awamutu cluster.

There was no good news for Auckland or Waikato either on Saturday; 91 cases were reported in Auckland and eight in Waikato. There were also four in Northland, including two children under 12, and the and single South Island case in Nelson-Marlborough.

"Fairly obviously, it would be good to think about a very proactive policy to limit transmission now from the North Island to the South Island."

A single isolated case flying to Blenheim should be quite manageable, provided contact tracing was "very rapid".

The Blenheim case illustrated the challenge of trying to contain the outbreak where there was ongoing transmission, Baker said.

"It does mean the system will have to remain very vigorous if it's to avoid this virus transmitting throughout New Zealand, which it could do quite quickly. It does mean we need a very vigorous effort to stamp out the remaining chain of transmission in Waikato.

“If transmission becomes well established in Waikato, it's obviously much harder to maintain a boundary around there."

University of Auckland microbiologist Associate Professor Dr Siouxsie Wiles said the case showed why the South Island had not been put at alert level 1, and it was a wake-up call for the south.

Marlborough economist Alistair Schorn said the positive case came at an unfortunate time for businesses, many of which were expecting additional visitors due to the Labour Day and Marlborough Anniversary (November 1) long weekends.

"The main thing is people are going to that much less inclined to have face-to-face contact with others until they know how and when this is going to shake out ... This 'basic hesitance' will have some effect on normal economic activities, but how big or small is yet to be determined.”

The surge in cases in the past week is putting pressure on Auckland’s hospitals with 55 people now hospitalised with Covid, including 8 at North Shore Hospital, 19 at Middlemore, 27 at Auckland hospital and 1 at Waikato.

There are five people in ICU.

Last week the Nurses Organisation warned the country was “dangerously unprepared” for a potential tsunami of community Covid cases.

It said there were around 3500 nursing vacancies nationally across the health sector and training for nurses to pick up intensive care duties had been “woefully inadequate”.

It’s hilarious when you see Mayors calling for the South Island to be cut off, or Northland plunged into Level 3 even when there are zero cases, or “tougher measures” when there are virtually no cases and we are 70% vaxxed. They had 90,000 crammed into the NOU Camp on Sunday watching a football game. It’s the same virus isn’t it? New Zealand is “world beating” apparently. Yeah, have you noticed everybody else in the world applauding? No, me neither. Hahaha

......of people hospitalised because (presumably not just ’with’...) covid, 55 apparently and 5 in ICU, when we remember the huge number of deferred/cancelled procedures ’just in case’ covid patients arrive and by default it seems get priority. I think we are currently concerned about something that simply hasn’t happened, of course let’s hope it doesn’t. The NHS in the UK seems to be coping ok even with their massive amounts of infection. I agree though with morepork it seems our health system in under resourced, but like any public service, there will never be enough to satisfy everyone. Now that the nurses have accepted the latest offer ( source: NZNO website) let’s hope that the resource issue can be fixed, sooner rather than later.

It’s not just pay. Why would overseas doctors and nurses come here to be locked in? If they want to see their overseas connections they have to play MIQ prison lotto and spend $4k. Other countries in the free world allow quarantine free movement to vaccinated people. New Zealand isolated itself. It cannot get out of it.

Hospitals have been on a knife edge for years. However we have had 18 months of warnings, seen what happened with overwhelmed hospitals in many countries that have a better health system and hospitals than us, but still the government sleep walks vaccine supply, vaccine stroll out, visa issues for nurses etc. Eventhe and example Tasmania as separate from Australia our medical and government seem to have learnt little and we wait and see then react after there is problems. Patti g themselves on the back and saying world leading absolutely tosh.

With or without Covid...

... our Health services have been understaffed and under-resourced for many years. The nursing staff we DO have are not given the necessary Intensive Care training because they are too busy working. And yet, we repeatedly see Nurses threatening strike action because they are not getting an internationally competitive remuneration. Can you blame them for going overseas?