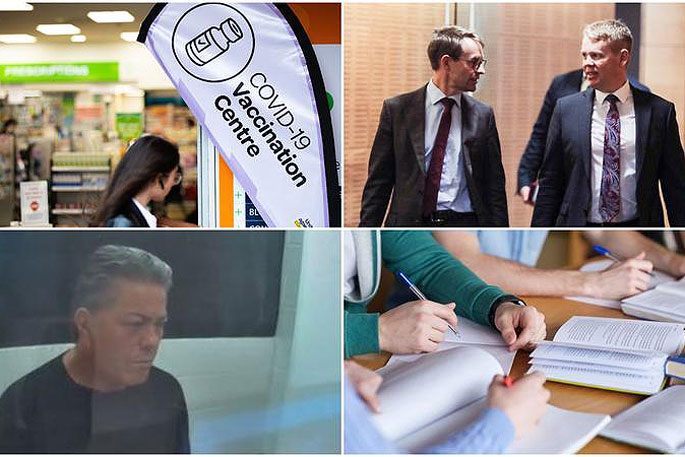 Breaches of Covid-19 restrictions have led to courtroom appearances, senior students can look forward to schools reopening and a botch-up has had 15 people in Wellington administered expired vaccine doses.

The person with Covid-19 on Waiheke Island is an essential worker, the Ministry of Health has confirmed.

But RNZ has spoken to the man's employer, who says that is not the case and doesn't think he should be trusted to isolate on Waiheke when he has already breached health orders.

The person is a close contact of an existing case in Auckland and has been cleared to isolate at home.

There are no locations of interest.

A total of 101 people with Covid-19 across 55 households in the wider Auckland community are isolating at home.

There were 60 new community cases reported today: 56 in Auckland and four in Waikato.

There were also two cases reported at the border today.

Of Wednesday's 60 cases, 22 are yet to be linked to earlier cases.

There are 166 unlinked cases from the past 14 days.

There are 43 people in hospital, including five in intensive care.

People in Rosedale, Redvale and Bayswater with even mild symptoms, or who are vaccinated, are being urged to get tested.

People in the west Auckland suburb of New Lynn are being told to do the same.

Secondary school students in Years 11 to 13 in alert level 3 regions can return to school next week.

Masks will be required at school and on school transport, and staff and volunteers will need a negative test before attending.

Students in alert level 3 regions who did not perform as well as expected would be eligible for an unexpected event grade, he said.

A teachers union says it is a reckless move.

It is Tamaki's second court appearance in relation to mass gatherings.

He was granted bail by Judge Josephine Bouchier to appear before the Auckland District Court next year.

A woman with Covid-19 has handed herself in to the police after fleeing quarantine in Auckland last night.

Police said she was being taken to a custody unit before appearing in Manukau District Court tomorrow, on a charge of failing to comply with a health order.

She was allegedly on her way from hospital to a quarantine facility and had stopped to collect belongings from home, when she fled.

Last night two people, both community cases, also scaled a fence at the Holiday Inn hotel and were caught about five minutes later.

Director-General of Health Dr Ashley Bloomfield said 21 people who received an expired or low vaccine dose recently did not undermine trust in the entire rollout programme.

Six people in the Bay of Plenty received diluted vaccines.

Meanwhile in Wellington, 15 people were given vaccines that had expired the day before.

Bloomfield said this was not harmful and the fact it was picked up so quickly showed robust the system was .

All of this just serves to show that if people won’t comply, or don’t believe compliance is necessary, then the current policy is doomed to failure. So what do we do? Just sit back and say: "Well, I’m vaccinated so I’m OK..." (which isn’t completely true either...) and just let the virus supporters reap their own whirlwind? It is sad, but inevitable, that the society will fracture down vaccination lines. The anti-vaxxers are going to become an underclass, with the vaxxed having a much better life. You can say it is their own fault, but they are Kiwis too, and we should be able to do better than that. I don’t believe for a moment that, in the current climate, people will isolate at home and comply...