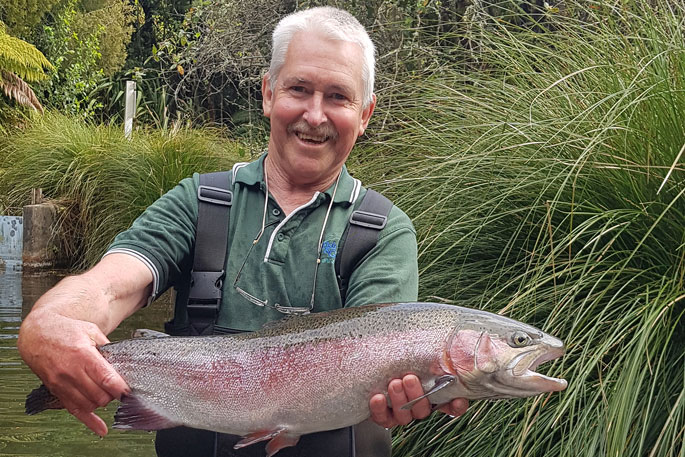 Fish & Game’s Lloyd Gledhill with one of the larger rainbow trout released into lake Mclaren on Tuesday.

Eastern Region Fish & Game have topped up the fish stocks at Lake McLaren with the release of more than 1500 fish.

On Tuesday, the Fish & Game tanker unit travelled from the trout hatchery at Ngongotaha, near Rotorua with a fresh batch of fish.

Fish & Game’s Mark Sherburn says the young fish are part of a regular liberation into McLaren, and over the next few months they will grow into a catchable size.

The fish released this time last year will now be 1kg-2kg so will be great sport for family members this long holiday weekend or anyone else who’d like to try their hand a trout fishing.

“Occasionally we throw in a few big guys just to encourage people out onto the water. Several of the fish we released would have been 3.5 to 4.5kg so they should put a smile on some lucky anglers’ faces.”

Lake McLaren is an ideal spot for fishing and the easy access makes it a great place for children to try their hand.

Fishing licences are available online or from agents and include several pricing options including short-term, children, and junior and family licences.

Licence agents can also be a good choice for advise on how to go about trout fishing.