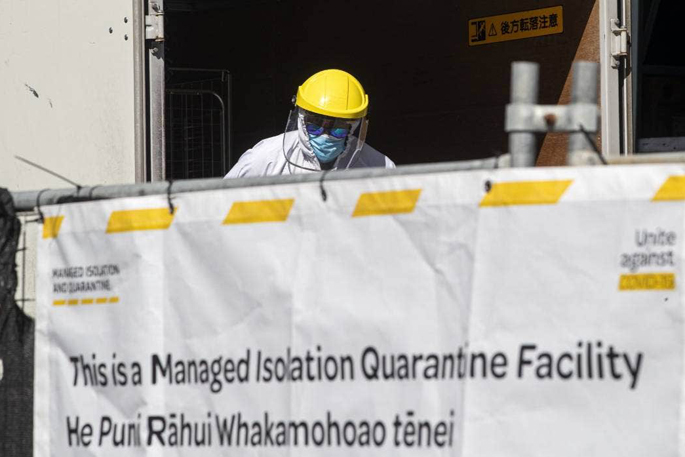 A person is alleged to have escaped from a MIQ facility on Tuesday. Photo: Joseph Johnson/Stuff.

A 26-year-old man has been charged with escaping a managed isolation and quarantine facility after going out to buy cigarettes, while another is still missing.

Court documents show a 26-year-old man has been charged with intentionally failing to comply with the Covid-19 Public Health Response Act by failing to remain in a managed isolation facility.

The 26-year-old appeared at the Auckland District Court today where his lawyer said the man left MIQ to buy cigarettes, with a 33-year-old man, and were apprehended shortly after.

He has four days left of his quarantine and Judge Josephine Bouchier remanded him on bail telling him he will not be allowed to leave the MIQ premises unless instructed by authorities.

Judge Bouchier also ordered him to abide by any Covid-19 restrictions and remanded him on bail to reappear in court in November.

In a statement from King, she says the two cases allegedly absconded around 5.40pm and were apprehended by police at about 5.45pm.

“They were observed by Police and MIQ Security the entire time. One was on day 6 of their stay and the other on day 7.”

The 33-year-old has been summonsed to appear in court at a later date and both men are considered as being at low risk of spreading Covid-19 to the community, King says.

The person who is still at large, allegedly absconded at 9.55pm, who had arrived directly from hospital.

That person had requested to return home to retrieve personal items, care for a pet and lock their house in south east Auckland.

“A security escort was set up to allow this to occur. They were given 10 minutes to do what they needed to. At the 10minute mark the security detail went to retrieve them and found the individual had disappeared from the address,” King says.

Police were notified and the person is yet to be found, she says.

“These incidents are really disappointing and unacceptable to me.”

A police spokeswoman says the Auckland District Custody Unit in Mt Eden will undergo a deep clean after the 26-year-old’s arrest and will return to normal operating.

“To minimise the exposure to other detainees and police staff the Auckland Custody Unit have moved prisoners to other custodial units within Tāmaki Makaurau.”

Have the two Auckland “ privileged” couple the broke quarantine, to travel to Wanaka, received their prison sentences yet?!