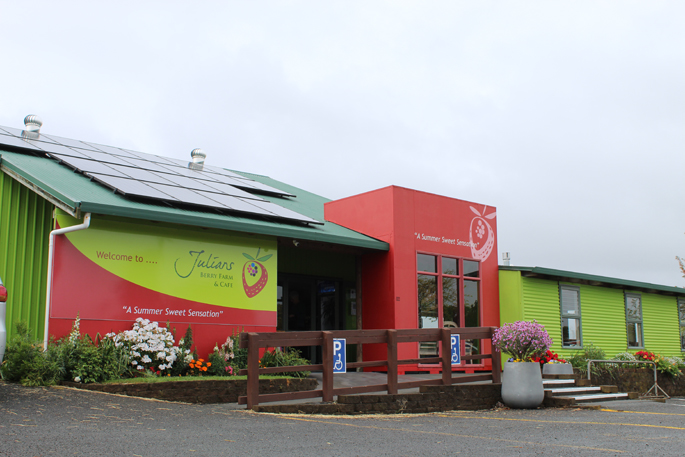 One of the parcels of land includes Julians Berry Farm. Image: MacKenzie Dyer/SunLive.

First steps are being taken to open up two large blocks of land for future residential development.

Whakatāne District Council’s strategy and policy committee has approved the development of plan changes that will see land at Ohope and on the outskirts of Whakatāne rezoned from “deferred residential” to “residential”.

The land in Whakatāne is between Huna and Shaw roads, and includes Julians Berry Farm. The land in Ohope is made up of seven Māori land titles, east of Maraetotara Road.

Julians Berry Farm owner Paul Julian is pleased the council has taken steps toward rezoning his land as it opens up more options, but he reiterates that he has no plans to sell or develop at this stage.

Mr Julian says he asked the council to rezone his land, but the process is likely to take two years and he had not made any decisions yet about what would happen with the berry farm.

“They’re keen and we’re not stopping them,” he told the Beacon. “At the moment we’re still keeping our options open and no decisions have been made, but this is moving in that direction, for sure.”

He says a couple of years ago, he and his wife and co-owner, Monica, had found the business to have become “a bit big and a monster to manage” and had contemplated selling. But cutting opening hours last season made a huge difference to their attitude to the business.

“This year we’re quite relaxed and it’s going really well.”

They are also weighing up other factors such as increased involvement and interest in the business by their older children.

Mr Julian says it will be a very emotional decision whatever they decide and developing the land for housing might not result in the closure of the cafe.

“One thing all of the developers we have spoken to, and the council were very keen on, was maintaining that corner as commercial, so lots of people envisage the mini golf and café staying there. There has already been some modelling done on adding some other businesses off the carpark, where the animal farm is.”

The plan change for rezoning has been recommended as a partial solution to the shortage of homes in the Whakatane district.

The Julians approached the council as they considered their future plans for the land but were not prepared to pursue a plan change themselves.

The owners of other affected land will be consulted as part of investigating the development of a plan change.

The report estimates that infill housing could account for 100 more homes in the Whakatāne urban area and 50 in the Ōhope urban area and there is the potential for 80 new homes at Coastlands and Bunyan Road.

The planned Opihi development, which is undergoing a resource consent appeal process, could account for 242 homes if it goes ahead and another 105 homes in the proposed retirement village bringing the total potential new homes to 682.

This leaves it well short of meeting the National Policy Statement of Urban Development over the next 10 years.

The report says the Julians Berry Farm site and a smaller property adjoining it could provide an estimated 110 dwellings and the Maraetotara site 160 dwellings.

However, the land still belonged to the owners, so it's entirely up to them whether they chose to develop housing on it or not.

A suggestion was made that the Maraetotora land would be ideal for papakainga-style housing.

While this would not entirely meet the demands outlined, the report said it would provide the council time to identify sufficient growth areas through the development of its spatial plan, to meet both medium and long-term demands.

“We anticipate the spatial plan will take up to two years to develop, which will be followed by another two years to rezone land through the plan change process,” the report says.

The development of the plan change will include technical investigations, discussions with landowners, and consultation with hapū and iwi, and other affected parties.