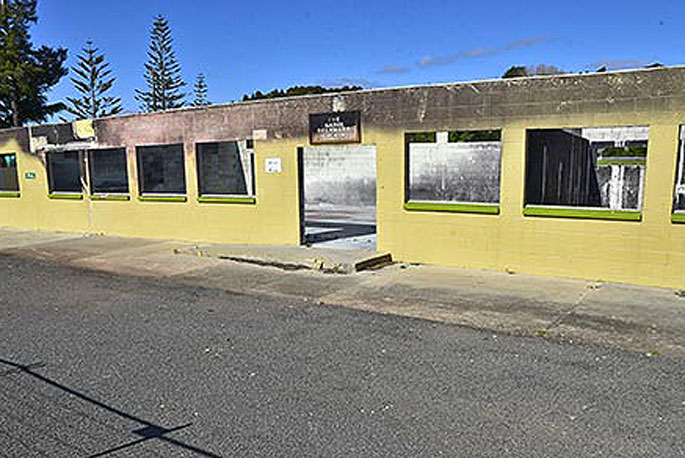 The Kawerau community is still waiting for its netball pavilion to be rebuilt after a fire gutted the building last year. Photo Brayden Lindsay.

Accusations have been fired at the Kawerau District Council through social media around the reconstruction of the burnt-out netball pavillion.

At meeting of the regulatory and services committee, council heard that reconstruction of the Kawerau Netball Pavilion building has been delayed because of discrepancies between two engineering reports.

The netball pavillion was completely gutted in a fire in March last year.

Councillor Aaron Rangihika questioned the progress of the reconstruction work on the council-owned building at the Tuesday meeting.

Operations and services group manager Hanno van der Merwe told elected members there is “a slight disagreement” between two reports the council had received as to whether the masonry walls remaining in the building had sufficient structural reinforcement to comply with current earthquake regulations.

The original report by the insurers claimed that they did, while another report that was done when resource consent was applied for appeared to show that they did not.

"I am waiting for a final report and we might have to get a third opinion depending on the way it goes.”

van der Merwe says if it turned out that there is not enough structural integrity in the walls the options will be to either put in more infrastructure or break down the walls and build to a completely new design.

He expects to be able to put these options before the council by the next meeting on October 26, so they could make a decision.

“It’s incredibly frustrating when there is a difference in engineering opinion while the community waits. So it would be good if they could come to some sort of agreement so we know whether we are having to start from scratch. It would be a waste of time to invest a whole lot of money on top of that masonry."

Tunui says there's a lot of interest in the community around why nothing has happened with the pavillion yet.

“It’s not council just delaying. We have to do that [work] responsibly, and get it right the first time.”

Mayor Malcolm Campbell says there has been some “ridiculous” accusations on Facebook around the pavilion.

“To all the keyboard jockeys out there, all the negatives, we haven’t actually spent all the insurance money on something else,” he says.

He encourages people to speak directly with either staff or a councillor if they have an issue.

“Ring one of us and talk to us about it. Don’t go off half-cocked and get it all wrong. I’m quite disappointed at some of the trash that’s being said out there. That sort of negative stuff does not help.

"Just come and talk to us if you have any issues and we’ll sort it out with management straight away," Campbell says.