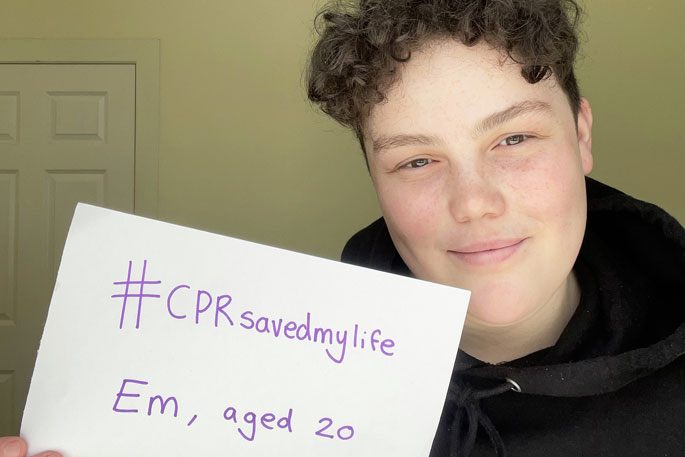 Em was visiting her parents when she suffered a cardiac arrest. Supplied image.

A 20-year-old is not usually someone you would associate with a cardiac arrest.

A cardiac arrest can happen to anyone, anywhere and at any time without warning, says the New Zealand Resuscitation Council.

Em Seyb and her parents, Roger Seyb and Karyn Sinclair, discovered this on the evening of November 2, 2020, when they saved Em’s life with their fast response.

Em and her family are sharing their story as part of the New Zealand Resuscitation Council’s World Restart a Heart Day Campaign.

Em is a Massey University student studying a Bachelor of Communications, and in 2020 was enjoying student life working as a Residential Assistant.

Em was visiting her parents in Auckland and sitting with her mum Karyn on the couch watching the evening news while dad Roger was in the kitchen cooking dinner.

“Em dropped her phone but when she didn’t move to pick it up it alerted me to something going on,” Karyn remembers.

Em had gone into a cardiac arrest.

Her cardiologist explained the event to her family as an electrical storm on the heart which causes it to stop.

This is different to a heart attack, which is a circulation problem blocking blood flow.

A cardiac arrest is sudden and extremely fatal with a survival rate of only 13 per cent.

Karyn called for Roger to help, at this time Karyn decided that she should call 111.

Roger noted that he thought about starting CPR but found it difficult to make the decision to begin.

He explains “the call taker was amazing, he was so calm and reassuring, he asked me to hold the phone next to Em’s face to hear her breathing. He told me to start CPR, and talked me through the entire CPR process”.

Em was not breathing normally, so Roger was instructed to begin CPR.

This quick action from her parents saved Em’s life.

Without CPR or a defibrillator (AED), someone in cardiac arrest is 10 per cent – 15 per cent less likely to survive with each passing minute, says a spokesperson for the New Zealand Resuscitation Council.

From the start of the 111 call to the co-response arrival from Fire and Emergency and St John Ambulance staff, was about seven minutes.

Emergency Services took over CPR and Em received two shocks from an AED to restart her heart.

Em’s story is an example of the Chain of Survival operating perfectly to save lives.

Through early recognition and calling 111, starting CPR and getting a defibrillator (AED) quickly, survival rates can be increased from out-of-hospital cardiac arrests, says the New Zealand Resuscitation Council.

This process can be remembered as Call Push Shock.

Roger says he thought about CPR but the hardest choice was making the decision to start. Karyn says she wants people to know that “you aren’t over exaggerating when calling 111”. A quick response saves lives.

The New Zealand Resuscitation Council encourages all people to refresh or learn CPR and find out where the closest AED is to their work and home through the AED Locations app or website.

A cardiac arrest can happen to anyone at any time and lives are saved when people know what to do.

Em’s memories in the weeks before and following the cardiac arrest are a bit patchy, and she must rely on her family to fill in a few of the gaps.

She also admitted that she didn’t know what a cardiac arrest was before she had one.

Em became very aware to check where the closest AED’s are to key locations such as work and home after her cardiac arrest.

She spent 13 days in Auckland Hospital, the first 36 hours were in an induced coma.

When talking about her hospital stay, Em remembers that she was the youngest person on the cardiac ward, so enjoyed chatting to the nurses that were around her age.

Because of her patchy memory, Em couldn’t remember her trip to Auckland so thought she was still in Wellington.

When Em woke up from the coma, she remembers being confused about how much time had passed, and asking to see her partner, Izzy, who had travelled up from Wellington the morning after Em’s arrest.

Em had an Implantable Cardioverter-Defibrillator (ICD) installed in her chest.

Her doctors were unable to find the cause of the cardiac arrest.

Em’s parents say the ICD provides some peace of mind.

“The cardiologist told Em that the device was installed so she could live her life and not be wrapped in cotton wool.”

The ICD detects if Em has another abnormal heart rhythm and will administer a shock if she ever goes into cardiac arrest again.

Just three weeks after her cardiac arrest, Em was back in Wellington with Izzy, attending friends’ 21st birthday parties and moving into a new flat.