Taranaki make it six from six with victory in TGA 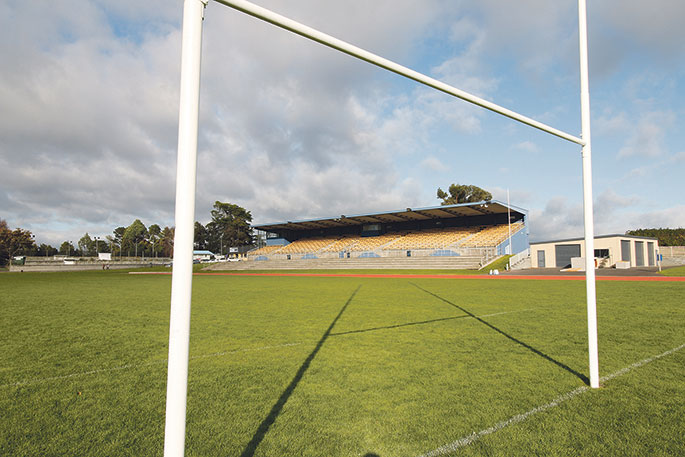 The game was played at Tauranga Domain on Saturday. File photo/SunLive.

A patched-up Taranaki have kept up their unbeaten start to the NPC season, with the Championship leaders taking down Premiership rivals Waikato 33-26 on Saturday.

In a match which the Mooloos had shifted to Tauranga due to the level 3 restrictions back home, the ‘hosts’ outscored the Bulls four tries to two, but the steady boot of Stephen Perofeta (seven penalties and one conversion) ensured the amber and blacks come away with two pieces of silverware.

As well as taking the Ryan Wheeler Memorial Trophy, the ‘visitors’ also defended the Chiefs Cup, as they broke a three-game losing run against Waikato, who have now dropped successive games either side of their week off, though still came away with two bonus points.

For Taranaki, it’s now six from six, with this latest victory not half bad considering they had no fewer than eight forwards out injured, which, along with lock Mickey Woolliams being called in from North Harbour, also saw Chiefs hooker Bradley Slater start at openside flanker.

Up only 15-12 at halftime, the Bulls looked under-par, considering the strong wind they had had at their backs, and it was Waikato who took the lead for the first time in the game a dozen minutes into the second spell, when Xavier Roe quick-tapped a penalty to send Beaudein Waaka to the corner.

Their advantage lasted all of five minutes, though, as Taranaki, having butchered several earlier opportunities, finally found their first try in the 58th minute, spinning through the hands, with Perofeta sending a lovely floating pass for the brilliant Kini Naholo, who, toes just inside the left touchline, then back-flicked an inside ball for Daniel Waite to finish.

When Waikato co-captain Fletcher Smith then pushed a penalty shot wide which would have had his side back in front, salt was severely rubbed into the wound when, soon after the resulting dropout, the first-five’s long pass was gobbled up by Naholo, who raced 70 metres for a superb intercept try.

Waikato weren’t done with, bagging a 68th minute bonus point when opting to scrum a close-range penalty and D’Angelo Leuila powered his way over, but in the end their ill-discipline (11 penalties to six) played a major role in their downfall.

Perofeta put the lead out to four points in the 74th minute, before a yellow card to reserve halfback Cortez Ratima for his high tackle on Vereniki Tikoisolomone had the Mooloos chasing with 14, only to cough up a ruck penalty for Perofeta to slot with two minutes to go.

Early on, it had been all Perofeta, with the competition’s leading scorer notching 100 points for the season in giving his side a 12-0 advantage off the tee.

Waikato were far from deterred, though, and with a brilliant burst of two tries in three minutes, they were all of a sudden back level by the quarter mark.

A Bailyn Sullivan charge sent them on their first foray into the Bulls’ 22m, with Mosese Dawai finishing well, then their next effort was a real eye-catcher, initiated by a Steven Misa run and offload, before Laghlan McWhannell ranged with the ball in one hand then popped a pass for second row partner James Tucker to score.

Smith had match to forget, struggling big-time with the high ball under the sun – dropping one and having to completely pull out of two others after losing sight of the flight – but Taranaki scuppered their chances to capitalise.

Pita Gus Sowakula’s effort was overturned by the TMO due to skipper Teihorangi Walden’s little knock on on the ground, then just as Perofeta sliced through on a kick return, Naholo looked set for an easy run in, only to make a meal of his collection.

Waikato then had a golden chance after the halftime hooter to take the lead for the first time, only for Smith to cough up possession in front of the sticks.