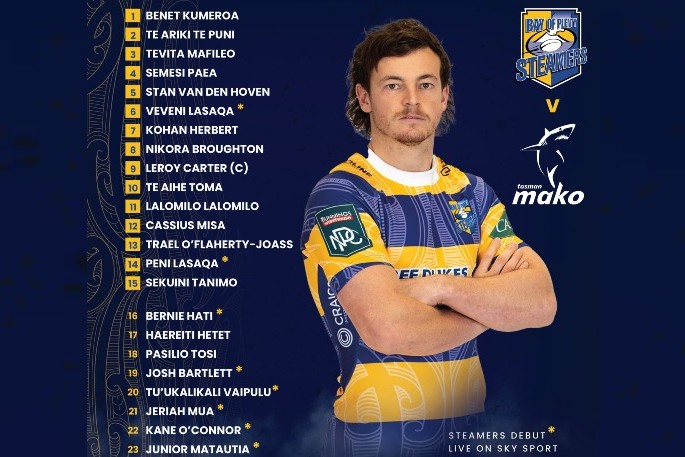 Eight new faces will wear the Bay jersey for the first time on Sunday as the Steamers travel down to Nelson to play Tasman in a Bunnings NPC non-competition game. In addition to the scheduled round-robin matches, there will be a non-competition match played each week. Teams who would have otherwise played Auckland region teams will instead play the non-competition game to ensure they don’t go two weeks without a match. Non-competition and non-round robin fixtures do not count towards the 2021 Bunnings Warehouse NPC competition. In other words, no points are awarded from these fixtures. “The non-competition games are a great solution given the unfortunate news of the Auckland teams’ withdrawals,” says Steamers Head Coach Daryl Gibson. “One, it allows our boys to play rugby rather than potentially having to go two bye weeks in a row. And two, the non-competition format allows us to give opportunities to some of our promising up-and-comers to wear the jersey for the first time.” As fore-mentioned, the playing squad for this weekend will include eight debutants, including cousins Peni and Veveni Lasaqa who will both start on Sunday. “It’s a proud moment for both Veveni, myself, and our families,” says Peni. “When we heard that we had both got the call-up, we were excited as it was unexpected for sure! “For me, it’s been a dream of mine to wear the Bay colours, and the fact I get to do it for the first time alongside my cousin makes it all the more special.” The game also marks a big occasion for halfback Leroy Carter who will Captain the Steamers for the first time. The news may have come as a welcome surprise for Carter. However, according to Backs Coach Mike Delany, the talented halfback has shown leadership qualities all season. “Leroy not only has leadership experience having Captained the Tauranga Sports Premiers, but we love how he goes about the game of rugby,” says Delany. “He’s got a great work ethic and carries a real ‘lead from example’ approach to the game. There will be a lot of youth taking the field for the game on Sunday, and we believe Leroy has the right qualities to lead these boys from the front.” Trael O’Flaherty-Joass returns from the All Black Sevens programme for his first game back in the Blue and Gold since 2018 where he played 7 games for the side. Te Aihe Toma, who is currently on 37 caps, also makes his return to the Steamers side after last featuring in 2019. The game v Tasman is scheduled for this Sunday, October 17, at 4.05pm and will be broadcast on Sky Sport. For any Bay supporters down in Nelson, the match will be free entry for the public with COVID Level 2 measures in place: scan in, wear face coverings and keep 1m social distance from those you don’t know. Bay of Plenty Steamers vs Tasman Mako 1. Benet Kumeroa 2. Te Ariki Te Puni 3. Tevita Mafileo 4. Semesi Paea 5. Stan van den Hoven 6. Veveni Lasaqa* 7. Kohan Herbert 8. Nikora Broughton 9. Leroy Carter (C) 10. Te Aihe Toma 11. Lalomilo Lalomilo 12. Cassius Misa 13. Trael O’Flaherty-Joass 14. Peni Lasaqa* 15. Sekuini Tanimo 16. Bernie Hati* 17. Haereiti Hetet 18. Pasilio Tosi 19. Josh Bartlett* 20. Tu’ukalikali Vaipulu* 21. Jeriah Mua* 22. Kane O’Connor* 23. Junior Matautia* *Denotes Steamers Debut