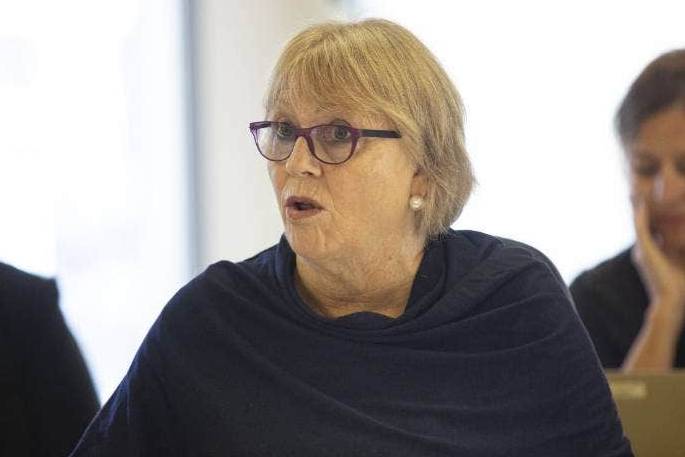 The Thames-Coromandel mayor is refusing to get the Pfizer Covid-19 vaccine, and has called vaccine mandates "abhorrent".

Sandra Goudie is waiting to have the Novovax jab instead.

The government has made a pre-purchase agreement for 10.72 million doses of Novovax but MedSafe is yet to approve it in Aotearoa.

Speaking to RNZ, Goudie did not want to explain her opposition to the Pfizer injections.

"I could have elected as an individual to keep silent but when I was asked the question I answered honestly and I am not going to discuss it or debate it with anyone."

Thames-Coromandel falls within the Waikato DHB but is not currently in lockdown like other parts of the region.

Overall in Waikato, 79 per cent of the eligible population has had one Pfizer dose, and 56 per cent has had two.

Goudie strongly disagrees with the government's vaccine mandates for health workers and teachers.

When asked what she would do if inoculation became compulsory for local government staff and elected representatives she says: "It's a personal choice".

"And I think it's absolutely abhorrent that people should lose their jobs through their personal choice not to be vaccinated."

In August, Goudie told Checkpoint she would not normally scan in when visiting locations. At the time, she said the Covid-19 community case would "probably not" push her to scan any more either.

"We are frontline to the community in many areas of our work, be it in our public spaces, swimming pools, libraries, front desks of councils ... so it is important that we play our role."

He is still awaiting clarity from the government about whether mandates will happen.

"We do have a responsibility for health and safety when it comes to our staff and our contractors and everyone involved in local government, so as we know it's a point still being worked through."

Crosby says mayors needed to get behind the rollout.

"In a leadership position, it's really important that mayors and leaders in other positions in the community have a positive response to this critical issue facing New Zealand."

Goudie's resistance to the rollout comes amid concerns about a small minority of doctors publicly opposing the vaccine.

Some have posted videos online pushing their anti-vaccination views, including a Northland GP Dr Damian Wojcik, and a psychiatrist employed by the Hutt Valley DHB, Dr Emanuel Garcia.

Covid-19 Response Minister Chris Hipkins was asked yesterday about the influence of these practitioners.

He says: "I think those people are being irresponsible, yes they are undermining what is a really really important public health objective for New Zealand which is to keep people safe from Covid-19."

Hipkins reiterated this week vaccination remained "our strongest tool" in the pandemic response.

business / hospo sites and the like put their heads together and say "no jab, no work, no entry" and while the anties might say we have our rights, the businesses ETC will also say that under the current Health & Safety LAW - we are required to keep our STAFF and anybody (PUBLIC) coming into our business SAFE. AND under the current COVID-19 problems - NO VAX - NO ENTRY WILL BECOME THE STANDARD REQUIREMENT!!! SIMPLE - no evidence of VAX - NO ENTRY !!

Freedom Of Choice All The Way

Good on her, and anyone else exercising their right to Choice, as democracy in NZ is fast disappearing!

This Lady should Step down from her role now.There are a few people standing on there high horses trying to dictate to the minority

Presumably she will fully finance her own medical care when she eventually gets the virus. This thought applies to all who decide against getting the jab.

I would like to have a choice in which vaccine I prefer too! Don’t want to being part of the ongoing mRNA experiment.

Dont come complaining if you get seriously ill or infect some other people and try to say sorry.

Good on her. At least she isnt a sheeple.

Not a good role model for caring about others.

What a lovely, well informed and considerate mayor she is. A new low for local government.

She should be leading by example......sack her!! All these people who believe in personal choices and freedom, fail to remember the choices and freedoms of other people who are affected by people not playing for the same team. Her actions/delay could cost lives. Just get vaccinated and stop pi**ing around. You should know better!!

I thought that the ideal was for "a jab".... Why not exclude her until she finances her own vaccination, as long as it’s an internationally recognised variant...? Stop playing games.

Vaccinated people realised that the Covid Angel of Death is coming to every town soon and herd immunity does not apply to the covid virus because it is so virulent. As shown overseas, the virus seeks out the unvaccinated quite successfully, so sad times are ahead for the unprepared.

Is it her body Chris Hipkins ?

Maybe Chris should remember Labours support for "My body, My choice". Chris you can’t have it JUST YOUR WAY or the highway. Jacinda told us all there would be no jab mandates, is this yet another lie ? Well seems so.

When you’re not willing to do the bare minimum to protect those around you. I think it’s absolutely abhorrent that people should resort to "personal choice", in a global pandemic, to avoid the responsibility part of the right to engage with society.

This is a personal choice NOT a govt force option. Good on her.