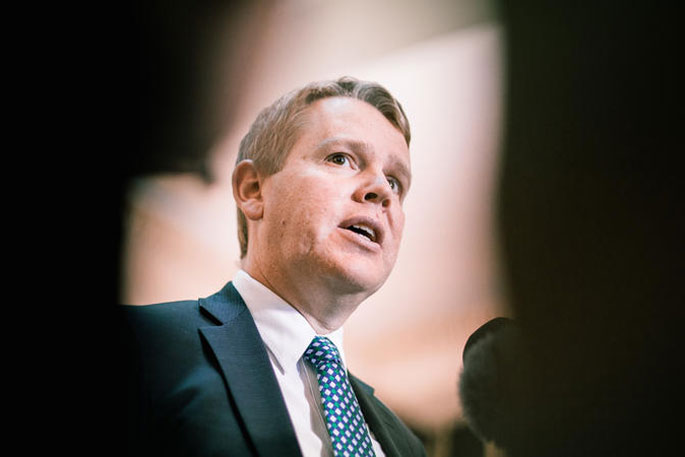 People with Covid-19 will soon be asked to quarantine at home, rather than being ushered to a managed isolation facility.

That modelling is based on a 90 per cent vaccination rate, which those regions have not met.

At even a fraction of those rates, quarantine hotels would be full to the brim.

There are 583 rooms that have been designated for quarantine across the country - 420 in Auckland, 110 in Hamilton, 10 in Wellington, and 43 in Christchurch.

For now, the system is coping.

In a statement, an MIQ spokesperson said:

"MIQ is not only an important part of our border measures to keep Covid-19 out of New Zealand - in community outbreaks such as this, we now also have a role to play in protecting the rest of New Zealand from Covid-19 spreading wider in the community."

But for how long?

Modelling commissioned by the Ministry of Health shows case numbers could peak at 5200 a week, and that peak would last for up to six weeks.

That is just in the Auckland and Northland regions.

Andrew Connolly, the chief medical officer for the ministry, says at those numbers, the vast majority of people would be asked to quarantine at home.

"Clearly at those numbers we would not have everyone in an MIQ facilities such as Jet Park.

"A lot of our work now is directed towards preparing for self isolation or isolation within the community."

The worst case modelling said upward of 150 people would be hospitalised at any one time, with peaks of 43 people in ICU.

Fortunately, those figures would not overwhelm the health system, but again, that is just in Auckland or Northland.

"We've done that before in our first lockdown last year, we did isolate positive cases within their own homes by and large," Hipkins says.

Hipkins says it is a necessary step to prevent MIQ spaces being limited even further for people coming to New Zealand from overseas.

"I think we will, like I said, fairly soon [you will] see us having to move to more of a home isolation model for those positive cases, rather than converting more and more of our MIQ facilities to cope with domestic cases.

"The last peak that we saw a couple of weeks back, I think we went to the peak of what we could do in terms of MIQ, and I don't envisage that we will go above and beyond that."

RNZ sought Cabinet's own modelling of where case numbers could be as restrictions are eased and the outbreak surges.

The request was declined, with a spokesperson saying the modelling data will be proactively released in coming weeks.

But Hipkins said it does not take a mathematician to understand that case numbers are doubling every couple of weeks, and will continue to soar.

"That does lead you to an exponential growth curve. So I think we can all do our own maths and figure out those models.

"There's no question we're going into a period where we are likely to see quite significant growth in the number of cases."

More details on home quarantine are expected in the coming weeks.

Opposition in favour of home isolation

The ACT Party supports moving towards quarantining people at home, and in fact would like it extended even further.

Leader David Seymour says New Zealand needed to start a much more risk-based approach, "isolating people who need to be isolated, rather than whole cities".

And he says it could be good option for people coming home through the border - who at the moment are having to fight for MIQ spots - "someone highly unlikely to have Covid who's had a negative test, flew to New Zealand and went to their house".

"If you've got someone who you can trust to stay home, why fill up an MIQ bed...and if it's not so onerous to isolate, people might be more willing to come forward for tests, you might actually get greater suppression of the virus," says Seymour.

"But I think the real question is, if we can apply it to people we know have Covid in New Zealand, why can't we let people who have just arrived and probably don't have Covid, self isolate as well?"

Seymour cites the plan for Parliament when it resumes after the two week recess: "Trevor Mallard, the Speaker of Parliament, has just said Members of Parliament can go from Auckland to Wellington and isolate for five days - if we can trust politicians to do it, surely we can trust the honest citizens of New Zealand to self isolate too."

National's Chris Bishop describes it as a "sensible move", given the likelihood of more cases in the community and the limited MIQ capacity.

"But the critical thing now is that we do it in a proper, effective way and that will come down to the planning that the government has undertaken; for this, my real concern is that there hasn't been a comprehensive planning for this to take place."

District Health Boards were asked to come up with their own plans some weeks ago, but Bishop questioned whether that should have happened sooner.

"The critical point now is that the planning has been done to make sure it's done effectively.

"So for example, the things that should be being looked at, is what are the checks that public health team will be doing on people who are required to self isolate at home?

"What capability do the police have to check that? Is there going to be the use of technology, for example, like there is in other countries, to make sure that people don't leave their homes when they are required to self isolate?" asks Bishop.

"All of these things should have been thought about before now, my suspicion is that they are very quickly being thought about as we speak, but of course that will potentially present problems when the plans come into place."

We had plenty of time bought by our county’s isolation and first lockdowns . This has been squandered by lack of strengthening ICU capabilities, staffing visa, slow vaccination , not building more quarantine facilities for tens of thousands in desperation trying to come here, and still woeful with no humane priority. We even had lots of warning about Delta but still the government didn’t get medical centres and doctors involved in vaccination because our supplies were inadequate. I am so sick of government being us how well we are doing when they are actually incompetently reactionary.

I’ve lost track of how often Adern has said ‘it was absolutely the right thing to do’, when clearly they have not got it right at all. Think of the pain caused to individuals and businesses by lockdowns and now they’ve gone and opened up Auckland even more than Northland and Waikato and cases are spiralling upwards. The Government’s response has been reckless while constantly patting themselves on the back. As the public we can’t even make future plans as the Government hasn’t got one and is instead making it up as they go. What a disaster this country has become.

Finally this Government is starting to act with proportion and sense and dropping the Chinese approach. Unfortunately they have wound up so many people so tight it will be difficult to unwind them and get them out of the cave. Hopefully they will ignore the so called leftie experts who have been wrong every step of the way. Those people are so privileged in their academic tax payer funded bubble world and are getting way too much air time.