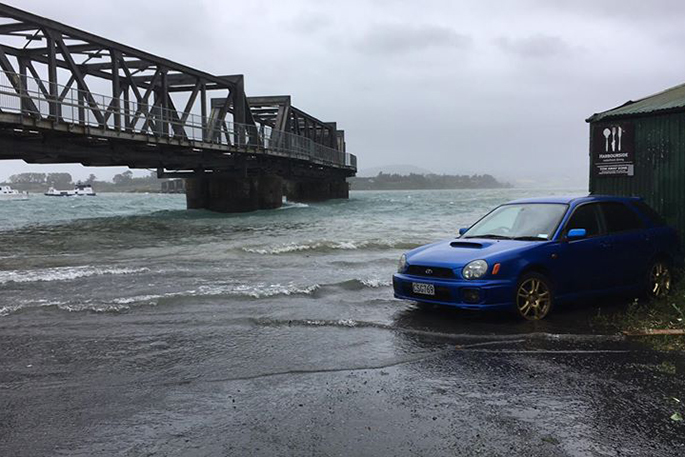 New NIWA-led research shows increasing flood risk is going to be what leads people to make changes to adapt to sea-level rise.

"Our research shows that it’s the first of these three impacts - increasing flood risk - that’s likely to be the main driver of adaptation efforts by coastal communities, and this tipping point is likely to be reached within two to three decades - sooner than many of us expect."

The research was carried out in Tauranga after councils in the area commissioned coastal modelling by NIWA and Tonkin & Taylor. Dr Stephens says the findings are likely to be applicable across the country.

"There are a number of properties around Tauranga Harbour that are built high on coastal cliffs, and for these people, erosion is the number one concern.

"But far more properties are built in places that currently experience coastal flooding, or soon will. This might currently only happen once every hundred years on average, but with rising seas it could increase to at least a five-yearly event within just two to three decades.

Coastal flooding is defined as flooding of the land by the sea rather than rainfall or rivers. It can occur during very high tides and is often exacerbated by storm surges - when low atmospheric pressure and strong winds drive the sea over land, resulting in very high storm tides.

"Frequent flooding is undesirable for communities. Adaptation actions include things like building new seawalls or other protections to mitigate coastal flooding, but these may not be the best long-term solution," says Dr Stephens.

He says other adaptive actions such as moving away from the coast could be driven by property owners facing difficulty obtaining insurance or mortgages for properties, or by design through proactive policy rules.

This research provides a better understanding of potential climate change tipping points and highlights the need to progress adaptation planning in coastal communities.

As part of the work, Dr Stephens’ team compared static and dynamic models in terms of impacts and timeframes for coastal flooding, erosion and inundation. Dynamic models use detailed hydrodynamic models to simulate the overland flow of water in a physically realistic way. In contrast static models are much simpler, and use a so-called ‘bathtub’ method, assessing whether places will flood based on their elevation alone.

The researchers found that the static model underestimated land and building exposure by up to 2.3 times compared with the dynamic model. "This is compelling evidence for using dynamic models to support adaptation planning," says Dr Stephens.

The coastal erosion and coastal flood modelling for this research was commissioned by Tauranga City Council, Western Bay of Plenty District Council and Bay of Plenty Regional Council. The findings are published in the Journal of Marine Science and Engineering.