The curious case of the confusing speed limits 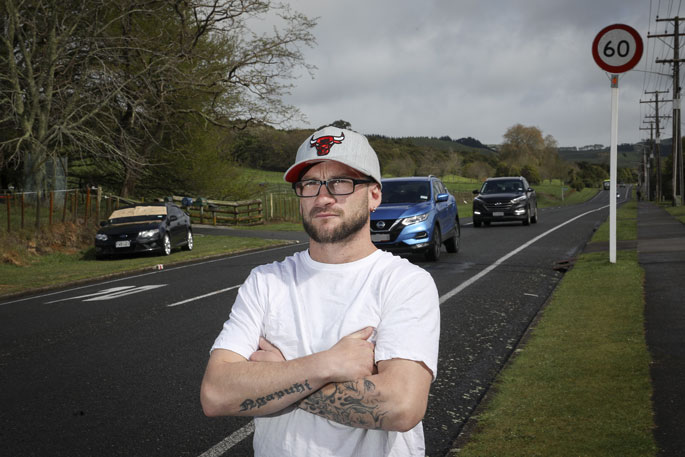 Motorists could have been forgiven for being a bit confused about the speed limit on one part of Pukehangi Rd in Rotorua – while signs say 60km/h, the number 70 is painted on the road.

That was until Saturday, when following media inquiries the council urgently removed the paint.

But a nearby resident says the speed sign issue was just the tip of the iceberg and he wants to see an end to speeding and engine braking on the street with the use of speed bumps.

Before the 70 was painted over, Stafford Otene said he had no idea what the speed limit was supposed to be on the northwestern part of Pukehangi Rd between Malfroy Rd and Pegasus Drive.

Otene, who lives with his wife and 9-month-old baby – with another on the way - said he had called the Rotorua Lakes Council about installing speed bumps on the local road.

He said trucks’ engine braking as they reached the 50km/h zone had woken the baby which was distressing for the whole family, and the speeds on the road had him fearing for his and other peoples’ children’s safety.

“We were going to shift here for the safety of our kids. We thought it would be nice and quiet.”

Otene said the speed threshold – two ‘lollipop’ signs nearby – was confusing and didn’t help the situation.

“You’ve got them on Clayton, Sunset [Roads], why can’t you have them on Pukehangi Rd?

Councillor Reynold Macpherson, who is also a nearby resident, said he knew of other people in the area who had issues with speeding vehicles on the road.

He said a reduction in the speed limit on the road was “thoroughly justified” but seemed to have “no effect on peoples’ behaviour”.

Macpherson wasn’t sure if speed bumps would help as he didn’t have expertise in the area, but said the conflicting speed signs were “obviously an oversight”.

Rotorua Lakes Council infrastructure and environment deputy chief executive Stavros Michael said the speed limit at the threshold had been changed on September 15 from 70km/h to 60km/h as part of the 2021 speed limit review.

“The remaining paint on the road was left in error.”

He said the council requested its contractor urgently remove it following questions about it from Local Democracy Reporting on Friday, and the paint was removed on Saturday.

He said the council was not aware of any queries from the public about the contradictory signs and had no record of Otene’s call about speed bumps. 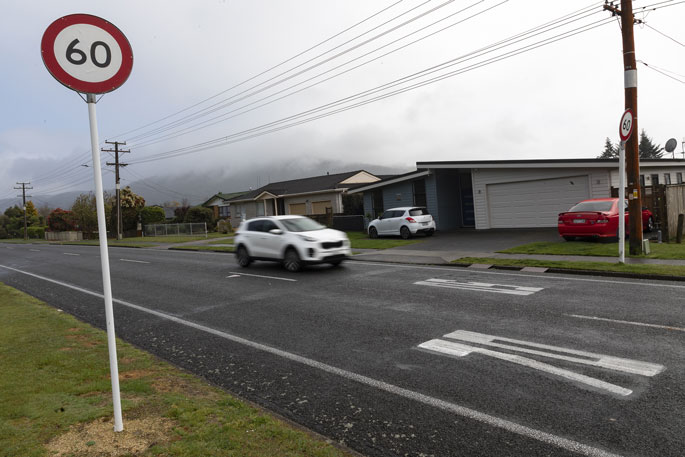 Michael said the council received many requests for traffic calming and each was risk-assessed based on speed data, speed-related crashes, pedestrian use and traffic volume on that particular road.

“The data is used to calculate a ‘priority score’ which enables the road to be ranked in terms of its priority for installing traffic calming interventions. This section of Pukehangi Rd is not currently on the list but we can include it for future consideration.”

He said the council had previously received requests to lower the speed on Pukehangi Rd, which contributed to its inclusion in the 2021 speed limit review, and the outcome of lowering the speed limit to 60km/h.

"[The] council is not aware of any engine braking complaints for this area and would expect that to be less of an issue now that the difference in adjoining speed limit is only 10km/h.”

Local Democracy Reporting asked the police if it would ticket a motorist going 70km/h in a 60km/h zone, despite the conflicting signage, if it would enforce an signed engine braking rule and if Pukehangi Rd was particularly problematic in terms of speeding.

A police spokeswoman said: “We police to the speed limits set by the council/NZTA, if police are made aware of conflicting signs we would contact council/NZTA.”

You can put up all the engine braking signs that you want and it won’t make any difference. Unless they have an enforcement requirement attached, like speed limit signs, and have a RED border, they are only a request to drivers to be considerate

Is the same. The signs state 50kmh, the road states 60kmh. The road leading to Memorial Park Pools states 20kmh and then speeds up to 25kmh for the judder bars so by the time you get to the pools etc where there’s potentially excited kids running around the speed limit has increased. Well done TCC.