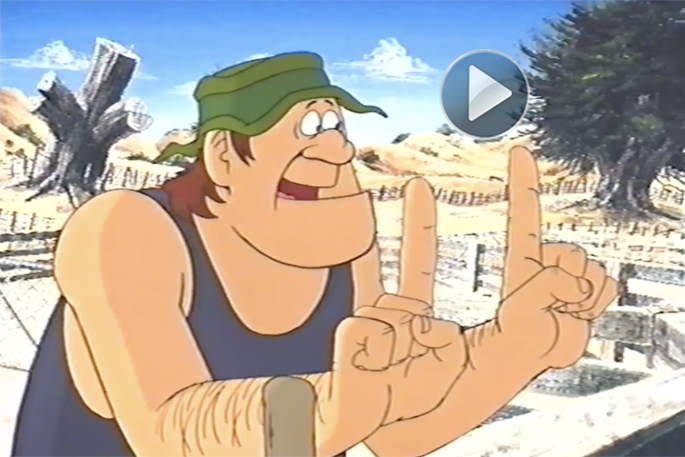 A blast from the past is being used to celebrate the 25th anniversary of the first MMP election in New Zealand.

After looking through the archives, the Electoral Commission has rediscovered the original Footrot Flats advertisements that explained voting under the Mixed Member Proportional system.

The campaign was developed with Footrot Flats creator Murray Ball for the Electoral Commission ahead of the first MMP election on 12 October 1996.

Dust off your desktop computer like it’s 1996, and get ready to watch Wal, Cooch, Aunt Dolly and Dog give you the low down on your party and electorate vote at www.elections.nz/mmp.

As Wal says, everyone gets two votes, one for a party, and one for a person, and the party votes decide the share of all the seats in Parliament.

“Twenty five years on, these ads are still fresh and funny and give a good explanation of our voting system,” says chief electoral officer Alicia Wright.

Alicia says voters have come to understand MMP well and know how to use their two ticks.

After each election the commission surveys voters and non-voters.

“The Electoral Commission thanks the family of Murray Ball for their permission to release the advertisements to mark 25 years of MMP,” says Alicia.

As a Brit I really enjoy New Zealand politics. It’s hilarious. Crackpots a plenty and the best bit is some of them actually manage to wield far more influence than their meagre following deserves. It’s good that there are so many to choose from and when they get together to form a coalition they almost manage to muster enough brain cells to get one whole brain between them.

time it was dumped. when you can be voted out but still get into parliament and become deputy prime minister

I was about 12 yo but. From memory when i did my research. about 50% of eligible voters did not vote. Of those. 55% of those voted for MMP. So...around 25% of voters wanted it. What a terrible decision.

I would rather have a small group, say seven or nine (so that a decision can be made through majority) of intelligent, articulate and responsible people who have lived life and know how to plan and achieve excellence (ignoring gender, race, creed or colour) making thoughtful decisions for the country as a whole over the disparate misfits in Parliament at the moment. It’s not working and is hugely more expensive than it should be. There is no agreement taking place across party lines simply because it wouldn’t look good to agree with the opposition. And we’re paying them handsomely to be petty and ineffective.

It is intended to make sure that minority voices are heard. But the downside is what we have seen, and, as ’Let’s get real’ made clear, it supports a talkfest and encourages backroom deals by people who are List MPs. It’s probably too late to go back now, but I still miss the definitive results of first past the post. You can still require alliances to get a majority, but at least the people in Parliament were elected and not "appointed". We should abolish List MPs, but given that our Democracy is being demolished by the present government anyway, it is probably moot.

The reality is almost nobody wants to be a politician, hence the stray sheep. At the core of MMP is a vote for those stuck in Blue/Red electorates being given a voice, so has nothing to do with what may be perceived as ’inactivity’ when election votes now reflect what the population wants and is no longer overwhelmed by suspect agenda promises.

Your comments are normally pretty darn good but this one . . . This one is perfectly spot on and your MMP description - brilliant, LOL. Have great week.

I agree with let's get real

I voted for MMP back then, I mistakenly thought the best possible politicians would join together to work as one and we would be rid of the petty mud slinging and squabbling that was the normal conduct at the beehive. Now it is worse with unelected rabble getting in the back door, never to be heard of during their term, but squabbling has increased. Did we get promised a review after one or two terms?

The start of the slide into inactivity is 25 years old. Money thrown at nonsensical projects to appease parties that are now needed to keep parties in power because the vote has been split. We are paying for talkfests, consultation, appeasement and vote buying and not getting value for money. The kicker being, many of the loudest voices snuck in the back door via a list and have never passed the scrutiny of public election.